"Different," was how Tadhg Furlong described his first experience of captaining Ireland at Test level.

The Leinster tighthead was Ireland captain for their 35-17 victory over Fiji, and he got some useful minutes under his belt as he prepares for next week's visit of Australia, and a tough winter stretch with his province.

Heading into the Bank of Ireland Nations Series encounter with Fiji, Furlong spoke of the honour associated with leading his country out, and how he would approach captaincy. He commented:

"I said it to Faz [Andy Farrell], 'That's no bother [captaining] off the pitch but, on the pitch, what do I do? Do I go for the corner?' But he had a few little bits and pieces for me, and told me to rely on the boys, get about your work and make the lads feel good... trust the boys, ya know?"

END_OF_DOCUMENT_TOKEN_TO_BE_REPLACED

Furlong last captained at U18 level, with Ireland, so he looked to the likes of Rob Herring, Tadhg Beirne, Joey Carbery, and when he replaced Robbie Henshaw, Garry Ringrose for short consultations on a few calls and set-plays. For the most part, though, he got on with business, left the backline to the likes of Ringrose and Carbery to organise, and did not stand on ceremony too much.

END_OF_DOCUMENT_TOKEN_TO_BE_REPLACED

During the pre-match pleasantries, Tadhg Furlong enjoyed himself as he led the team out with the two lucky mascots, shared a joke in the line-up with Tadhg Beirne and introduced President Michael D. Higgins to his teammates.

After four minutes of this afternoon's match, Furlong may have been forgiven if a couple of doubts crept in.

END_OF_DOCUMENT_TOKEN_TO_BE_REPLACED

Having weathered a Springbok storm to win, last weekend, and Ireland XV that featured eight changes, and three uncapped players in the match-day squad, went 7-0 down and lost Robbie Henshaw to injury.

Furlong spoke with his players under the posts and got them back on track by stressing that Ireland had to make their visitors work a lot damn harder for their gains. The first blow had been landed on Irish chins, but it was time to show some attacking intent. In the end, it was the Irish pack that were the difference on day that showed top-level Test rugby rarely hands you a gimme.

The problem for Fiji, as it proved last weekend against Scotland, was a lack of discipline. The Pacific Islanders had one man sin-binned in the first half and conceded 14 tries overall.

At one point in the first half, after what looked like a legitimate Levani Botia poach, referee Mathieu Raynal pinged the Fijian for going off his feet in the attempt. Waisea Nayacalevu, the Fiji captain, had already contested a couple of calls but lost the head at this one. 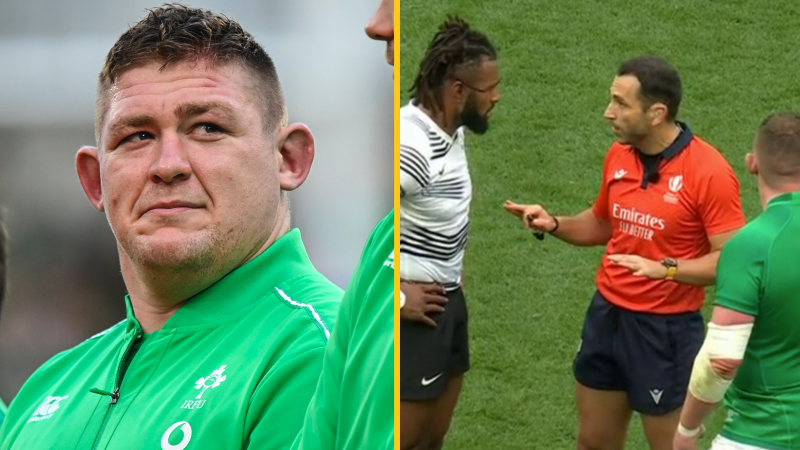 All the way through that frustrated Nayacalevu encounter with Raynal, Tadhg Furlong stood close by to hear what was being said.

He knew his team was on top, and Fiji's discipline was starting to slip. On three separate occasions in the first half, as the French referee got into with the Fijians, the Wexford native stood right there, never interrupted and just said 'Cool' or 'No bother' to him.

There were a couple of crunching hits that he alerted Raynal to but, for the most part, Furlong left the referee be.

It was, one might contest, a relief from the usual commentary he gets whenever Johnny Sexton is captaining Ireland. That duo have a taut relationship, over the years.

Furlong would have been well aware of Raynal getting riled up by the Fijians jawing too much, so he gave the ref all the support he needed, made his life as easy as possible and took whatever decisions that came his side's way. It was not a completely smooth captaincy ride, but he handled the referee ideally.

"It was a real privilege for me, to lead this group of players," Furlong said in the post-match press conference.

"Thanks to the boss-man for giving me the chance," he said, as he hooked his thumb towards Andy Farrell. "Not many get to do it."


popular
Roy Keane reacts to Brazil's jubilant celebrations in first half demolition job
World Cup 2022 Day 16: All the major action and talking points
Portugal boss could strip Cristiano Ronaldo of captaincy
Rory McIlroy explains 'falling out' with Shane Lowry that lasted a few years
Roy Keane handled Gary Neville’s goal celebration as most Irish fans would
Roy Keane cracks up ITV pundits with description of Senegal supporters
Didi Hamann thought Brazil substitution was "disrespectful" to South Korea
You may also like
3 days ago
Shay Given on how far Ireland could've gone at the 2002 World Cup with Roy Keane in the team
4 days ago
From Ireland to Argentina: Alexis Mac Allister's Irish roots explained
1 week ago
Former England international admits he wishes he had played for Ireland
2 weeks ago
Two baffling omissions as four Ireland stars make World Rugby 'Dream Team' of the Year
2 weeks ago
Josh van der Flier claims World Rugby Player of the Year at Monaco ceremony
2 weeks ago
"Highlight of my Ireland career" - Behind the scenes as Jack Crowley and Ross Byrne covered for a legend
Next Page