"It could be me only time!"

Many of us doubted we would see Tadhg Furlong against Fiji, this weekend, when he did not emerge for the second half of a brutal, unrelenting match against the Springboks.

The Leinster tighthead had been an injury doubt, heading into the game, but was able to play the first 40 minutes of Ireland's 19-16 victory. He jarred his ankle in the final stages of the first half, though, and it was left to Finlay Bealham to see the game out.

END_OF_DOCUMENT_TOKEN_TO_BE_REPLACED

Furlong has bounced back well enough to be all buy confirmed as a starter in the Ireland XV to face Fiji, on Saturday. Added to that, the Wexford native is in line to captain his country at Test level for the first time.

At the IRFU's High Performance Centre, this afternoon, Furlong settled in for his first interview as an Ireland captain and did what he does best - deliver the goods.

"It's class, it's class. It's not something that was ever on my radar before, to be honest with you. To get an opportunity [to captain] is special."

"I said it to Faz [Andy Farrell], 'That's no bother [captaining] off the pitch but, on the pitch, what do I do? Do I go for the corner?' But he had a few little bits and pieces for me, and told me to rely on the boys, get about your work and make the lads feel good... trust the boys, ya know?" 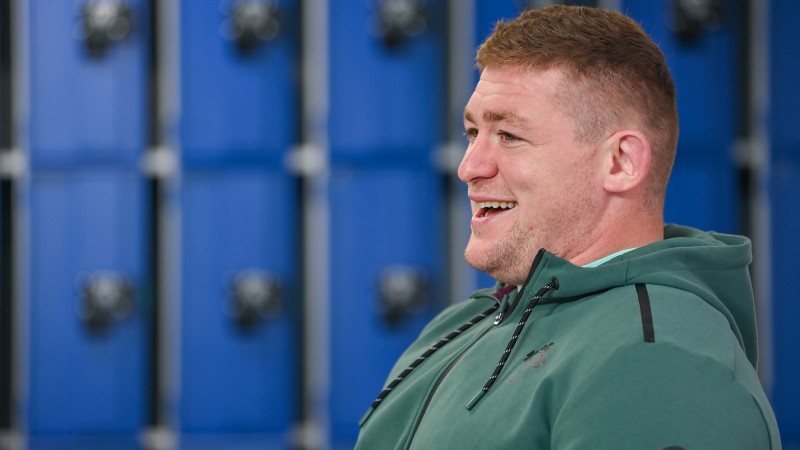 Tadhg Furlong during an Ireland rugby media conference at the IRFU High Performance Centre on the Sport Ireland Campus. (Photo by Seb Daly/Sportsfile)

Tadhg Furlong admits 'that's going back, boy' when he harks to the last time he captained an Ireland side, over a dozen years ago at U18 level.

"It was a lot of blood and guts, and banging tables, back then.

"I've been lucky enough to be involved in a lot of teams with a lot of good captains, so it's trying to learn from them."

END_OF_DOCUMENT_TOKEN_TO_BE_REPLACED

Furlong has only recently been drafted into the Ireland squad's leadership group and says Johnny Sexton - the regular captain - was one of the first men over to him to offer his advice and support, when the players learned of the decision.

Asked why he never had Ireland captaincy on his radar, Furlong said, "Never even thought of it.

"When you are a young fella and you dream of playing for Leinster, Ireland, the Lions, I never even dreamed of captaining Ireland.

Asked what he did dream of, Furlong shot back, "Spuds, gravy, the mother's Sunday roast!"

The prop is aware that he has only been bestowed the honour for a game, and that this is the ship steered by the likes of Sexton, Peter O'Mahony and Conor Murray, but what makes him proud is how the news will go down in Wexford, and with everyone that knows him.

Andy Farrell is set to announce his match-day squad to face Fiji on Thursday afternoon. "It is different," says Furlong, "but it is a challenge... Fiji are very physical and very direct."

That full Tadhg Furlong interview can be viewed here.


popular
Roy Keane handled Gary Neville’s goal celebration as most Irish fans would
Roy Keane cracks up ITV pundits with description of Senegal supporters
World Cup 2022 Day 15: All the major action and talking points
Damien Duff makes 'brutally honest' England World Cup prediction after Wales win
Ronaldo finally reveals why he got that hideous haircut
France demand FIFA change result of World Cup defeat over 'rule break'
From Ireland to Argentina: Alexis Mac Allister's Irish roots explained
You may also like
2 days ago
Shay Given on how far Ireland could've gone at the 2002 World Cup with Roy Keane in the team
3 days ago
From Ireland to Argentina: Alexis Mac Allister's Irish roots explained
1 week ago
Former England international admits he wishes he had played for Ireland
2 weeks ago
Two baffling omissions as four Ireland stars make World Rugby 'Dream Team' of the Year
2 weeks ago
Josh van der Flier claims World Rugby Player of the Year at Monaco ceremony
2 weeks ago
"Highlight of my Ireland career" - Behind the scenes as Jack Crowley and Ross Byrne covered for a legend
Next Page