The first half was as brutal, gritty and thankless as you could get. Ireland went into an early lead but were pegged back, as both sides threw everything they could at the opposition.

END_OF_DOCUMENT_TOKEN_TO_BE_REPLACED

There was a big moment of controversy, when Cheslin Kolbe and Pieter Steph du Toit teamed up to dump tackle Mack Hansen. After several TMO replays, it was decided to just yellow card Kolbe. That decision was driven home when Kolbe returned at 3-3.

Johnny Sexton did add another Irish penalty but a Kolbe response, off the tee, had the score level at the break. A sign of the attritional style of the first 40 minutes was four players - Stuart McCloskley, Tadhg Furlong, Conor Murray and Lood de Jager - not making the whistle for the second half. 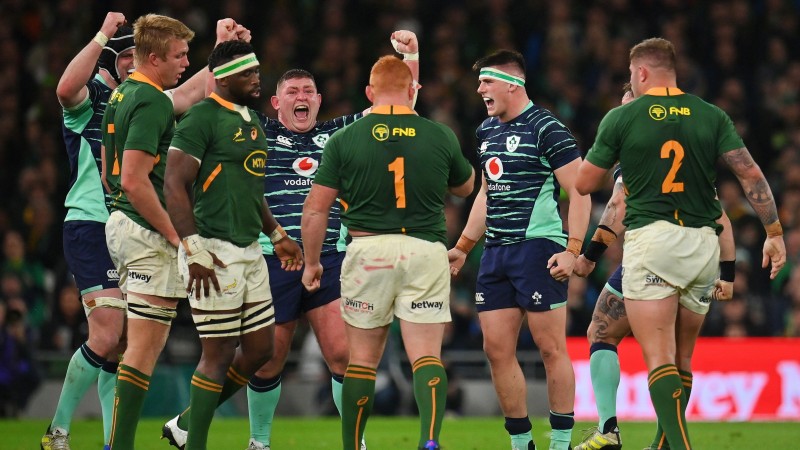 END_OF_DOCUMENT_TOKEN_TO_BE_REPLACED

Ireland already had three replacements on, after 40 minutes, but they were the team that took the match by the scruff of the neck, in the third quarter.

They boldly went for a rolling maul when they had a penalty awarded to them, and were rewarded when Josh van der Flier - with barely an inch to spare - crashed over to score. Four minutes later and a brilliant team move saw Mack Hansen score, over in the left-hand corner. The only downside was Sexton missing both conversions.

A joy to behold 🤤 pic.twitter.com/zg1OqcoCtr

END_OF_DOCUMENT_TOKEN_TO_BE_REPLACED

South Africa brought on the likes of Willie Le Roux and Faf de Klerk, and roared back with a Franco Mostert try that set up a close finish. Johnny Sexton nailed a 73rd minute penalty, though, and there were eight points in it.

A sublime Eben Etzebeth offload put Kurt-Lee Arendse over in the corner and, though Kolbe missed his conversion, it was tight again but Ireland closed it out well.

A couple of nice takes, early on. Conceded a penalty after receiving a hospital pass and getting dumped by Mapimpi. Made some bold carries, from deep, in the second half.

Showed good composure to get away passes under serious pressure. Made some great defensive reads. 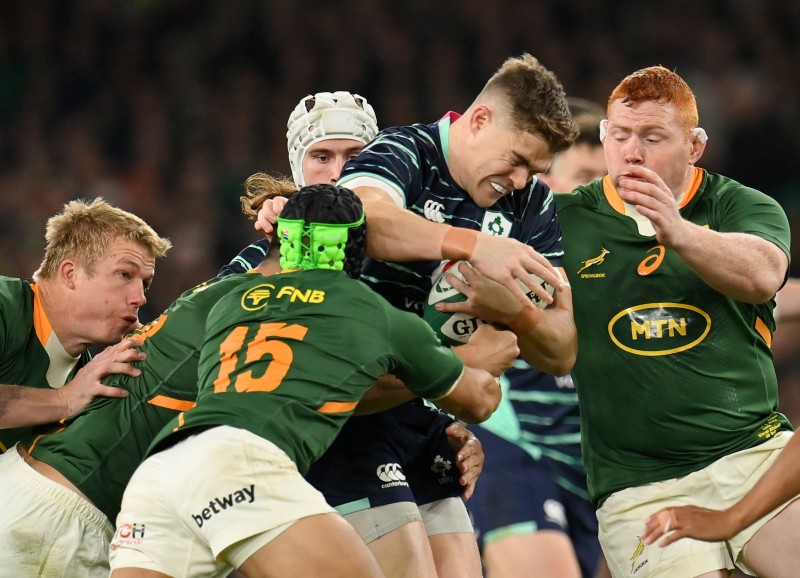 Lovely aerial take that helped Ireland win an early penalty. Put in a great shift, marshalling the Irish backline in defence and making some punchy carries.

His undoubted strength showed with one carry that got his side out of a hole. Won his team a massive turnover inside their 22, on 15 minutes. Was going well, but a shoulder injury saw him leave the fray after 26 minutes.

Was lucky to escape injury after getting dumped on his head and neck by Kolbe and du Toit. Competed well in the air, chased hard and held his width well to be rewarded with his try.

Some good tackles in defence. Was swallowed up and conceded a penalty, on one first half carry. Needed treatment, early in the second half. Missed two touchline conversions and should have kicked for touch, moments before the Mostert try. Landed a late penalty to give his side a cushion.

First box-kick had the Boks in trouble, and conceding a penalty. Split-second too slow at a breakdown and knocked on, under pressure from Jasper Wiese. Brilliant show-and-go line break, on 32 minutes. Looked to have pulleed his hamstring before his 33rd minute exit.

A really big day at the scrum for Porter, and he only enhanced his reputation. Busy across the park for his 68-minute shift.

So close to an incredible try, but he knocked on before grounding on his second bite at the cherry. Nine tackles made, none missed. Lineout wobbled on a couple of occasions.

Put in one hell of a shift, in defence and on both sides of the breakdown. Only last 40 minutes as his tender ankle gave out.

Lovely hands in the lead-up to the Hansen try. Made a now customary turnover and stuck 10 tackles.

Put in some huge, early hits. Big lineout steal. Needed running repairs at the end of an unrelenting half. 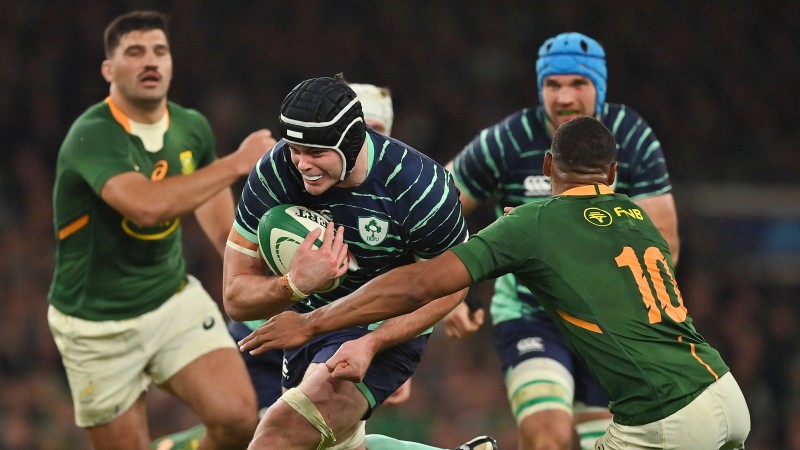 Was well, well, well up for this one, and gave anyone in earshot both barrels. Won his side a breakdown penalty in the first half. Won another big one, after the break.

How he stayed in touch, and got the ball grounded for his try, only he could tell you. Kept his head amid the heaving din. Stepped up with a number of key carries, and tackles. Topped the Irish tackle count, on 16.

Was teaming up with Ryan to lay in some big hits, and standing up to a stern Springbok test, in defence. Big turnover won in the first half, and two more after the break.

Showed up really well for the Hansen try, and timed his pass well. Made some big defensive hits.

Great break helped set up the Hansen try. Made one loose box-kick but made up for it by taking down Wiese.

Won a scrum penalty in one of his first acts on the field. One loose pull-back pass had his team in bother.

Threw himself straight into it.