"It just shows you how special this group is."

Conor Murray may have only got to play 34 minutes of Ireland's latest big Test match win, but he has been left with memories of a whole week that will last a life-time.

END_OF_DOCUMENT_TOKEN_TO_BE_REPLACED

The Munster scrumhalf was tipping away nicely - putting the Boks in trouble with an early box-kick, sparking some attacking forays and making one great line-break snipe - until a groin injury cut his 100th Ireland appearance short. He was able to put aside his personal disappointment and was down on the sidelines for the second half, cheering on his teammates as they beat the reigning world champions, 19-16.

That performance of Murray and his Ireland team was covered in depth on House of Rugby [from 12:00 below] while the 33-year-old also spoke of an incredibly personal, and touching, Keith Earls gesture before the game. 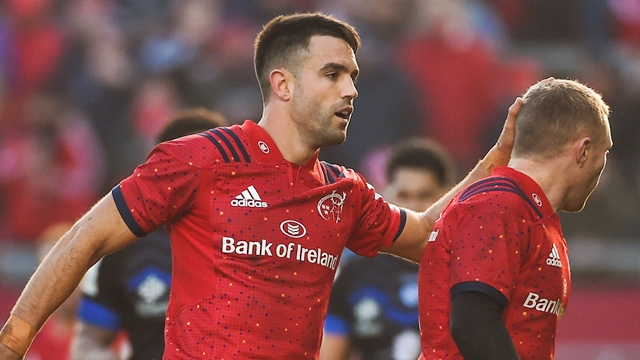 Keith Earls of Munster gets a pat on the head from team-mate Conor Murray during a 2018 Champions Cup game at Thomond Park. (Photo by Diarmuid Greene/Sportsfile)

END_OF_DOCUMENT_TOKEN_TO_BE_REPLACED

After helping Ireland to a series win over the All Blacks, in New Zealand, during the summer, Keith Earls would have been hoping to stay involved with the Ireland team up to, and including, the 2023 World Cup.

Earls, who made his first Test outing in 2008, is on 98 Test outings for Ireland, but injury means he has only played one game this season. With the likes of Mack Hansen, Rob Baloucoune and Jimmy O'Brien [albeit as outside centre cover] all performing well against South Africa, and both Andrew Conway and James Lowe on the scene, it remains to be seen whether the 35-year-old will get a chance to make it to 100 caps.

That, and his selfless at answering the call from Andy Farrell, are two reasons why Earls' pre-match gesture to Conor Murray was so impressive. After Ireland's 19-16 win, Murray said:

"The boys made it so special all week. From the jersey presentation - with Earlsy driving up the road from Limerick and presenting me the 100th cap jersey - and I had the family with me, and everything. It just shows you how special this group is, and the way everyone looks out for one another."

'I really appreciated it'

Hoping, but not expecting, to one-day join that illustrious 100-cap club, Keith Earls swept any personal frustrations at missing out on the latest Ireland camp to one side. His focus was purely on making the occasion all that more special for his Munster and Ireland teammate, and long-time friend.

We should not be surprised, though. Keith Earls has previous with being a sound, sound skin.

Back in 2017, Jacob Stockdale told us how both Earls and Simon Zebo had been so forthcoming of their time, and advice, when his Test debut against the USA was coming up. After that game - a match in which Stockdale got his first Test try - Earls was looking out for him. The Ulster winger recalled:

"Keith Earls was pretty brilliant in that respect. After the game, I was going to go swap my extra jersey with one of the USA players. As I was walking out of the changing rooms, Earlsy just said, 'Here Jacob, don't be swapping your first'.

"He gave me his other jersey, and let me swap it, and I was able to hang on to my two first cap jerseys, which was really, really dead on of him. I really appreciated it."

Rivals for his jersey or provincial teammates, Earls has always had that great touch.

He is well aware of how big these moments are, and how much they should be cherished. Anything he can do to aid that, he will do it in a heartbeat.

Underestimating Keith Earls at your peril


popular
Everton release brutal 59-word statement to confirm Anthony Gordon departure
Five confirmed changes and guidelines to have big impact on 2023 Six Nations
"Every team did it!" - Paul O'Connell on Roy Keane comment to Ronan O'Gara that he couldn't deny
"It's crazy to think Bundee Aki might come straight in and start against Wales"
Owen Farrell praises Johnny Sexton in revealing interview ahead of Six Nations
British publication urges Gareth Southgate to claim Evan Ferguson for England
"I think Tyrone are going to go down this year" - O'Sullivan unimpressed by 2021 All-Ireland champs
You may also like
2 days ago
Two Ireland stars included in Premier League's 'young English XI'
2 days ago
British publication urges Gareth Southgate to claim Evan Ferguson for England
6 days ago
"He didn't give me that jersey back!" - Johnny Sexton on new rival Jack Crowley
6 days ago
Johnny Sexton on Six Nations documentary, and two Ireland players Netflix should follow
1 week ago
Liverpool reportedly selling Caoimhin Kelleher for Jude Bellingham funds
1 week ago
Robbie Henshaw on his life-long friendship with Bundee Aki and Netflix documentaries
Next Page