From an Irish perspective, it was far from pretty but their forward pack did enough to eventually put an indisciplined Fiji side to bed. Our Ireland player ratings have a few highlights, though.

Ireland found themselves 7-0 down after only three minutes as Fiji spread the ball wide and Kalaveti Ravouvou finished off a blitzing move. As that try was being converted, Robbie Henshaw limped off and Garry Ringrose was on.

END_OF_DOCUMENT_TOKEN_TO_BE_REPLACED

Ireland needed Ringrose and Jimmy O'Brien to step up in defence to ensure they hole they would eventually climb out of was not any deeper. Once they finally woke up, the scored three tries through a Nick Timoney brace and Rob Baloucoune dot-down [clip below], and had two more chalked off by TMO reviews.

Fiji red card all but ends their challenge

END_OF_DOCUMENT_TOKEN_TO_BE_REPLACED

The score stood at 21-10 at half-time, so Fiji knew an early score in the second half would put them back in the contest. Unfortunately, they were reduced to 14 after only 45 minutes.

Albert Tuisue heaved into Joey Carbery and never looked to drop his height. Shoulder to head and, while Carbery went off for a Head Injury Assessment, Mathieu Raynal sent Tuisue off. Fiji then dropped to 13 men, after a second of their men was sin-binned, and Mack Hansen made that count with a try in the corner.

Just as that looked to have ended the game as a meaningful contest, Fiji opened up and Simione Kuruvoli finished off a fine attacking move that, when converted, made it 28-17. 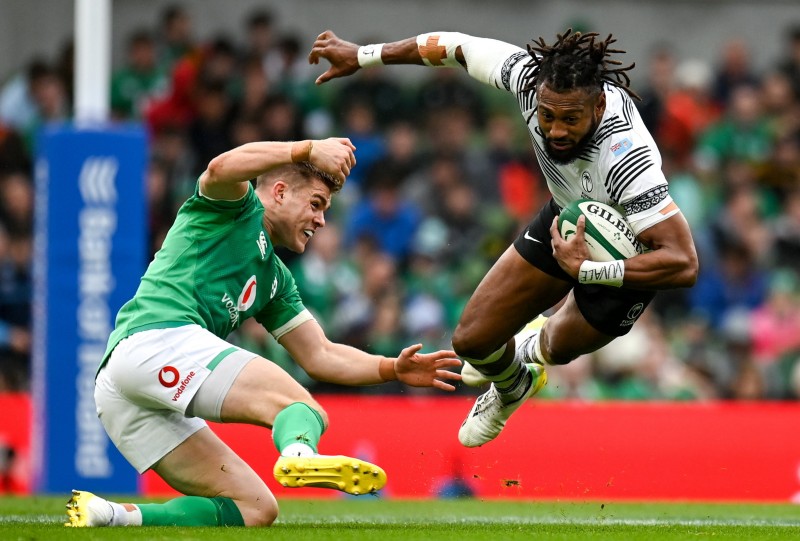 Waisea Nayacalevu of Fiji evades the tackle of Garry Ringrose of Ireland. (Photo by Harry Murphy/Sportsfile)

Made a big defensive hit when Fiji were threatening a second try, after a flying start. His worth to his Ireland team has grown after these past two outings, at fullback and outside centre.

After a battling performance against the Springboks, had an easier time of it and was gift-wrapped his try by his teammates and a nice Jamison Gibson-Park pass.

Lasted only four minutes before hobbling off. Must be a doubt for Australia now.

Nice couple of flat passes and an early grubber for touch. Looks serene out there, bringing in teammates and not fearing the big bruisers haring after him. Will be disappointed at falling off a tackle for Fiji's second try.

Not clean on a couple of aerial take attempts. Wasn't really his day, as much as he tried. Was rewarded with a try in the corner after holding his width.

Add a little spice to that 🤌

Was tipping away nicely but may come away frustrated that he had no real stand-out moment in attack. Popped over his three kicks and passing was steady, but his day ended early after taking a shoulder to the head.

Fell off a tackle, out wide, before Fiji's opener. Lovely awareness, and pass, to set Baloucoune up for his try.

Some nice carries in the first half, and the Irish scrum was solid.

Gave away rash penalty inside thew Fiji 22 to give them an easy out. Had a handy day with his lineout darts - Fiji often opting not to contest, in fear of the Irish maul.

With Fiji's discipline slipping away, as the game progressed, captain Furlong was keeping schtum and letting the opposition talk themselves into trouble. Scrum was strong, too.

Sat down Botia with a bruising carry. His ball-carrying was key to getting Ireland over the gainline on a few important occasions. Did spill one forward with an offload attempt, under pressure. Overall performance was very good.

Win his side THREE turnovers. Conceded a lineout penalty, but got about the park well and caused Fiji breakdown issues. Good lineout target.

Really grew into the game and started to open up as the game progressed. Stuck all his tackles and came up with a turnover, too. 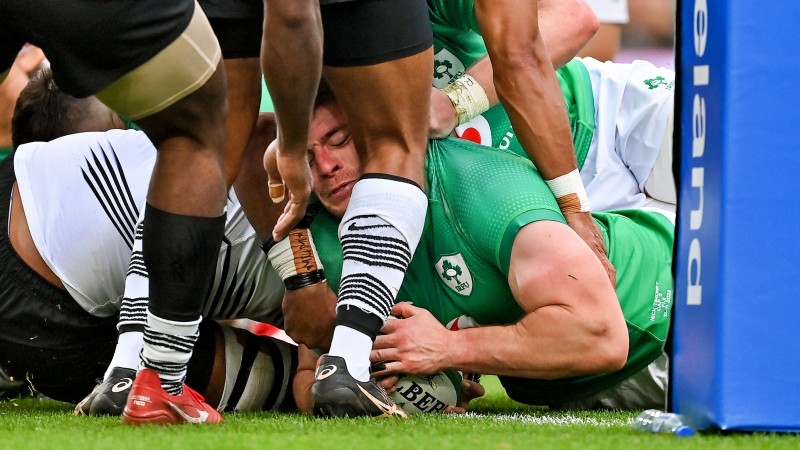 Warned for an early, dangerous no-arm tackle attempt. Helped his future Test hopes by showing his eye for tries can transfer over to Test level. Gave a fine account of himself.

Penalised for an early offside in a slack Irish start. Went close, but was in touch, when seeking Ireland's fourth try. 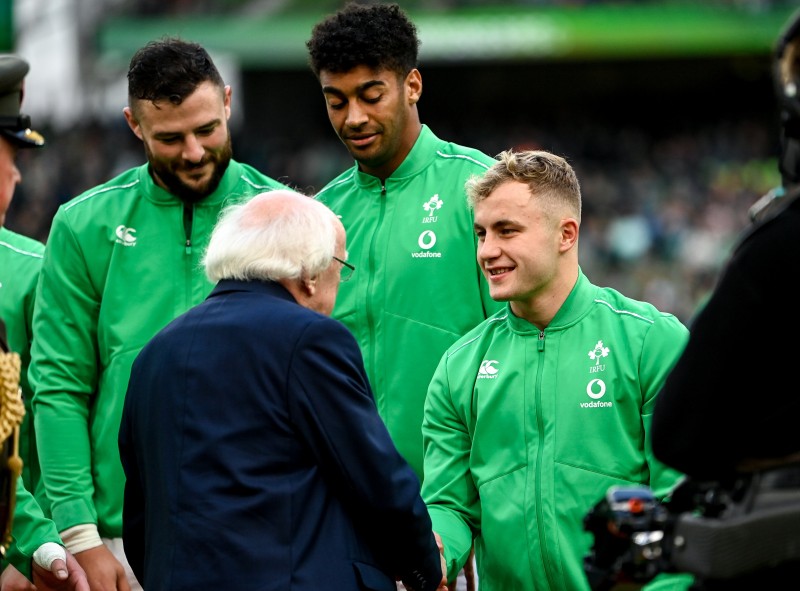 Won his side a crucial, pressure-relieving penalty, soon after his early arrival.

Made some big, late metres.

Couple of late pick-and-goes as Ireland put on squeeze, near the end.

You may also like
3 days ago
Shay Given on how far Ireland could've gone at the 2002 World Cup with Roy Keane in the team
4 days ago
From Ireland to Argentina: Alexis Mac Allister's Irish roots explained
1 week ago
Former England international admits he wishes he had played for Ireland
2 weeks ago
Two baffling omissions as four Ireland stars make World Rugby 'Dream Team' of the Year
2 weeks ago
Josh van der Flier claims World Rugby Player of the Year at Monaco ceremony
2 weeks ago
"Highlight of my Ireland career" - Behind the scenes as Jack Crowley and Ross Byrne covered for a legend
Next Page