We could do it. We're just not in the mood.

This courageous soul probably wasn't in the mood either but he still dared to brave the legendary diet plan of Dwayne "The Rock" Johnson which looks like this. 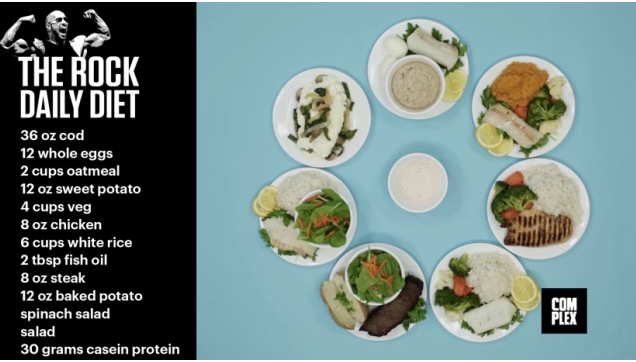 Complex's Sean Evans tried to climb the mountain that goes into The Rock's stomach every day and, despite a valiant effort, he came up short thanks to a few skipped meals and some unplanned trips to porcelain city.

I guess some guys just aren't made for 36 oz of cod in a day, shame.

popular
How The Mountain lost 36kg ahead of boxing fight with The Beast
Sam Bennett's green jersey masterclass got Lance Armstrong talking
Irish cyclist Sam Bennett delivers classic putdown to British cycling magazine
"He's found a way to do it. Whether that's good or bad for the game, I don't know"
The SportsJOE 12 o'clock quiz | Sam Bennett special (Day 184)
Les Ferdinand explains why QPR didn't take the knee
QUIZ: Can you name every player to score four goals in a Premier League game?
You may also like
1 month ago
The most underrated gym exercises of all time
1 month ago
The most overrated gym exercises of all time
8 months ago
Work-out at home this Christmas with these five easy exercises
1 year ago
Sam Underhill on post-match pasta, pull-ups and side-stepping Beauden Barrett
2 years ago
5 small margins that will improve your athletic performance
2 years ago
One simple exercise locks should try to improve their game
Next Page