How dare a young athlete take advantage of exciting opportunities afforded to her?

Canadian tennis star Eugenie Bouchard has responded to those who ridiculed her recent appearance in Sports Illustrated's Swimsuit edition.

Bouchard insists that she encountered plenty of online criticism from trolls who felt like she should be putting all of her energy into tennis rather than accepting the invitation to appear in the magazine.

Last week, Bouchard appeared alongside world number 1 Serena Williams and world number 15 Caroline Wozniacki in the 2017 Swimsuit issue of Sports Illustrated and the 22-year-old posted photos from the shoot to social media.

It was there that her focus was questioned but, ahead of her return to competitive action at the Mexican Open, she has the perfect response to her haters. 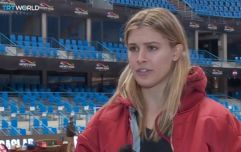 WATCH: It could all kick off between Eugenie Bouchard and Maria Sharapova after explosive comments

END_OF_DOCUMENT_TOKEN_TO_BE_REPLACED

"I've gotten that over the last couple of years I've done a photo shoot anywhere it's like 'oh god, get back on the tennis court... what are you doing, go practice," Bouchard told CBS Sports.

"I practised for six hours today and I did this like two hours after. I'm practising for six hours [a day] all this week, 'what are you talking about ... do you work 24 hours a day?'

"You have to deal with that hate and not take it personally. It's been a couple of years now. 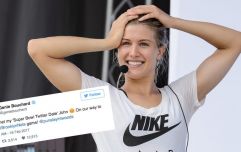 END_OF_DOCUMENT_TOKEN_TO_BE_REPLACED

"There's nothing wrong if you have success and it opens doors for other activities, like being in Sports Illustrated. Why not? I would be crazy not to take advantage of that.

"Why limit yourself? I'm still a tennis player – that is my number one priority – but if I do have a bit of time, here and there, to do other things, why not?"


popular
World Cup 2022 Day 10: All the major action and talking points
Iran demand action by FIFA after USA team change flag on social media
"I have equal love for football and hurling" - Sheehy set for two Leinster finals in two hours
Canelo Alvarez duped by fake Lionel Messi Instagram post
World Cup 2022 Day Nine: All the major action and talking points
"I appreciate Moycullen now more than ever" - Cooke's American lifestyle from a Moycullen base
For Ballyea, this journey all started out in a purple Toyota Corolla
You may also like
5 years ago
There's been an update on the bet between Genie Bouchard and the student who just knew the Patriots would come good
5 years ago
Genie Bouchard was so convinced of a Falcons win, she bet a date on it
7 years ago
Video: Niall Horan getting caught ogling Genie Bouchard actually worked out pretty well for him
7 years ago
Neymar comes in second on this list of the world's most marketable athletes
3 months ago
"Or is she? Or is she" - Greg Allen's frantic commentary perfectly captures Louise Shanahan's outstanding run
3 months ago
"To be able to call myself the fastest man in Irish history is just amazing" - Olatunde overjoyed after record-breaking run
Next Page