Eugenie Bouchard overcame Maria Sharapova in the second round of the Madrid Open on Monday just a fortnight after she dubbed the Russian a ‘Cheater’ and claimed that she shouldn’t be allowed to play the game again.

The 23-year-old came through a gruelling three-set thriller to defeat Sharapova for the first time in her career in the fifth meeting of the pair.

The 60th ranked Bouchard’s joy was clear for all to see as she jumped for joy at the end of a sapping final set.

She soon tweeted her delight at defeating Sharapova, mirroring Danielle Bregoli, the "Cash Me Outside" girl who became an internet sensation after her appearance on Dr Phil in September 2016.

END_OF_DOCUMENT_TOKEN_TO_BE_REPLACED

Bouchard’s defiant comments prior to the game stoked the fire, and the intensely competitive first set was a true reflection of how much neither player wanted to lose this grudge encounter. It was a full-blooded 70-minute slog which was high in entertainment but also high on the error count.

Bouchard eventually came out on top winning 7-5, and despite being comprehensively defeated in the second set, the Canadian regained her composure to win the third set converting her second match point with her 20th winner of the match.

Bouchard’s victory is made all the more remarkable by the fact that she hadn’t won a competitive tennis game in the three and a half months leading up to Madrid.

It just goes to show how some added tension, weight and mental drive can inspire a player's performance. Bouchard was been hell-bent on defeating Sharapova and backing up her comments that Sharapova shouldn’t be allowed to play the game. She let her racket do the talking last night. 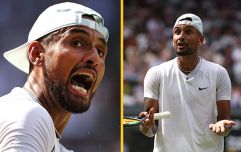 END_OF_DOCUMENT_TOKEN_TO_BE_REPLACED

"I was inspired because I had a lot of players coming up to me privately, wishing me good luck," said the Canadian.

"They were players I don't normally speak to and I got a lot of texts from people in the tennis world that were just rooting for me. I wanted to do it for myself, but also for all these people."

"Some girls in the locker room were coming up to me and really wishing me good luck which doesn't normally happen," added the world number 60.

"It showed me that most people have my opinion and they were just maybe scared to speak out."

Bouchard has struggled to live up to the standards she set during a breakthrough season in 2014, in which she reached semi-finals at the Australian Open and French Opens before finishing runner-up to Petra Kvitova at Wimbledon.

She finished this 2014 season inside the top 10 but the weight of expectation and added media pressure obviously took their toll on her, as reflected by her current WTA rank of 60.

This may be the spark needed to reignite her career, however and she will be hoping to build on this success when she faces Angelique Kerber, who is about to replace Serena Williams as world number one, in the next round.

popular
World Cup 2022 Day 10: All the major action and talking points
Iran demand action by FIFA after USA team change flag on social media
"I have equal love for football and hurling" - Sheehy set for two Leinster finals in two hours
Canelo Alvarez duped by fake Lionel Messi Instagram post
World Cup 2022 Day Nine: All the major action and talking points
"I appreciate Moycullen now more than ever" - Cooke's American lifestyle from a Moycullen base
Roy Keane's issue with Argentina star could rival Graeme Souness and Paul Pogba
You may also like
4 months ago
Nick Kyrgios to appear in court after being charged with domestic abuse
4 months ago
Nick Kyrgios tells reporter 'I do what I want' after defying Wimbledon dress code
4 months ago
Nick Kyrgios called ‘evil bully’ by Stefanos Tsitsipas after heated encounter
4 months ago
Wimbledon accused of sacking temporary staff for 'bizarre' reasons
8 months ago
Nick Kyrgios apologises to ballboy after nearly hitting him with racket
9 months ago
Alexander Zverev makes a fool of himself with attack on umpire's chair
Next Page