The tightest call is at inside centre.

We ended up with only five Champions Cup games, at the weekend, as a Covid surge and travel restrictions combined to chaos sporting fixture havoc.

The EPCR awarded Montpellier a 28-0 forfeit win over Leinster after a Covid outbreak in their senior squad, but the four-time champions will surely lodge an appeal as they had named a match-day 23 to travel and had clearance to fly to France.

END_OF_DOCUMENT_TOKEN_TO_BE_REPLACED

Two of the other three provinces won, with Connacht taking a losing bonus point away from their trip to Welford Road to face Premiership table-toppers Leicester. Ulster won an entertaining Friday night encounter with Northampton while Munster ground out a home win over Castres. 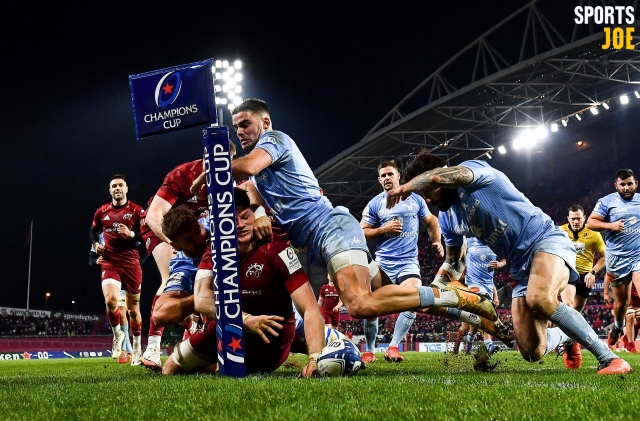 Jack O’Donoghue of Munster goes over to score his side's try against Castres, at Thomond Park. (Photo by David Fitzgerald/Sportsfile)
Advertisement

END_OF_DOCUMENT_TOKEN_TO_BE_REPLACED

Leinster had two inclusions in last week's Champions Cup Team of the Week for the four provinces. Their absence from the latest fixtures frees up slots for the other three provinces.

Ulster end up with eight players in our XV, with four for Munster and Connacht getting three included. Four Ulster players are in the backline, and both Billy Burns [two try assists] and Craig Gilroy [scored bonus point try] narrowly miss out.

The tightest backline call was inside centre. Stuart McCloskey tweaked his hamstring and Stewart Moore did well in his stead. The battle, though, was between Damian De Allende and Bundee Aki, with the classy South African edging it. That was De Allende's first European home game in front of fans, and he treated them to a real show.

Up front, Munster tighthead John Ryan joins Ulster duo Andrew Warwick and Rob Herring in the front row. Alan O'Connor gets in ahead of Niall Murray and Jean Kleyn but Tadhg Beirne was a lock.

END_OF_DOCUMENT_TOKEN_TO_BE_REPLACED

In the back row, Cian Prendergast acquitted himself well against Leicester and earned praise from former Wales and Lions captain Sam Warburton.

Nick Timoney was brilliant for Ulster and Jack O'Donoghue's match-winning try sees him bump out Duane Vermeulen and Jarrad Butler in the No.8 tussle.