No sooner was Rory Kockott on the pitch, 53 minutes into Castres' away date with Munster, then he was getting scolded by Peter O'Mahony, and referee Matthew Carley.

It was a tale of two tries and two Test Match Official reviews. One went against Munster when it looked perfectly fine. The second was less certain but it was awarded. Such is slow-mo rugby.

END_OF_DOCUMENT_TOKEN_TO_BE_REPLACED

Munster's youth-infused side may have blown Wasps away, last Sunday, but their latest Champions Cup task was altogether tougher going.

Despite dominating the first half at Thomond Park, it was more a case of Castres not being up to much than Munster being anywhere near 100%. The French side arrived in Limerick having won only ONE of their last 27 away games.

Munster's European record at home - 68 wins, one draw and five defeats - is what the phrase 'Fortress' fits snugly with. By half-time, though, no-one was confidently calling it. Munster felt they had a legitimate Damian De Allende try but the TMO - after multiple replays - felt he did not find enough evidence to overturn Carley's 'No try' call. 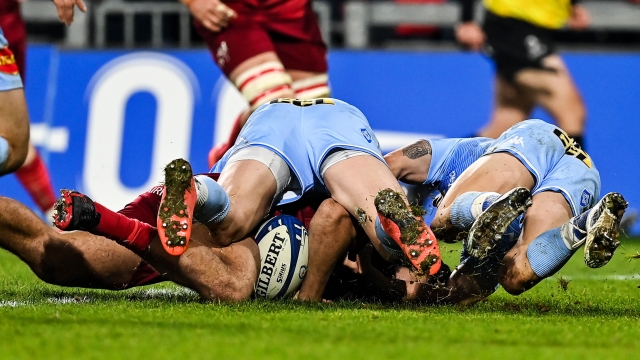 Damian de Allende of Munster goes over for a try, which was subsequently disallowed, against Castres at Thomond Park. (Photo by Brendan Moran/Sportsfile)

END_OF_DOCUMENT_TOKEN_TO_BE_REPLACED

While 13-0 would have had a nice half-time look to it, Munster only led 9-3 at the break when Benjamin Urdapilleta tagged a penalty back for the win-shy visitors.

With Ben Healy missing a chance to extend Munster's lead with a penalty on the halfway line, it remained 9-3 when replacements from both sides started filtering on. One of whom was the ever-chatty Rory Kockott.

END_OF_DOCUMENT_TOKEN_TO_BE_REPLACED

The South African scrumhalf, who represented France several times at Test level, immediately inserted himself in the conversation when Castres conceded a penalty for Andrew Conway taking a bump under a high ball. Munster captain Peter O'Mahony has dealt with Kockott plenty of times before and called out:

Kockott kept up with the chat, despite Carley telling him to be quiet and to "shut up!" on three occasions. So frustrated was the English referee that he conceded an extra 10 metres on the penalty.

Munster won the attacking lineout and, several phases later, Jack O'Donoghue was over in the corner. There was another lengthy TMO wait, but this time it went in the home side's favour.

If you thought that was enough to soften Kockott's cough, it was not. He continued to chide Munster players and the referee, and eventually forced Carley to warn him a yellow card would be coming his way if he opened his mouth again.

Urdapilleta and Healy traded penalties as Munster, who failed to get the bonus point, sought to finish on a high. In the end, though, it was Kevin Konrath that got over for what turned out to be a consolation try for Castres. Bizarrely, the French side opted to kick a penalty to touch, after the clock turned red, as they decided not to go for the win.

This is likely to be the last time they have a packed house at Thomond Park until next Spring, so it is a shame it was not more of a memorable contest.

Our Man of the Match: Tadhg Beirne (Munster)