Big debates for just about every position.

The Champions Cup kicked off at the weekend and there were talking points all over the shop. The Irish provinces dominated, too.

We are used to reflecting on weekends when the provinces fare well in the United Rugby Championship [and its' previous iterations] but to sit here on a Monday and reflect of four wins from four in the elite Champions Cup is remarkable.

END_OF_DOCUMENT_TOKEN_TO_BE_REPLACED

Not only did the Irish sides win, they did it in style. The four sides combined for 145 points scored and three of the victories were by large margins. Ulster only won by six points but that was against a decent Clermont side and the usually daunting Stade Marcel Michelin.

Selecting a Champions Cup Team of the Week, then, for round one of the pool stages was far from easy.

One hell of a weekend for the Irish provinces in @ChampionsCup 🍀 👏 pic.twitter.com/W83o9Pez4A

Munster with the biggest representation

END_OF_DOCUMENT_TOKEN_TO_BE_REPLACED

Our Champions Cup XV features players from the four Irish provinces, and the competition is fierce.

Starting with the backline and outhalf was relatively simple - Jack Carty getting the nod after pulling the strings in a 36-9 win over Stade Francais. Ulster's John Cooney just pips Jamison Gibson-Park to the scrumhalf slot after excelling against Clermont.

Elsewhere in the backs, we have the Ulster trio of Ethan McIlroy, James Hume and Stuart McCloskey, while Andrew Conway and young fullback Patrick Campbell are the Munster inclusions. 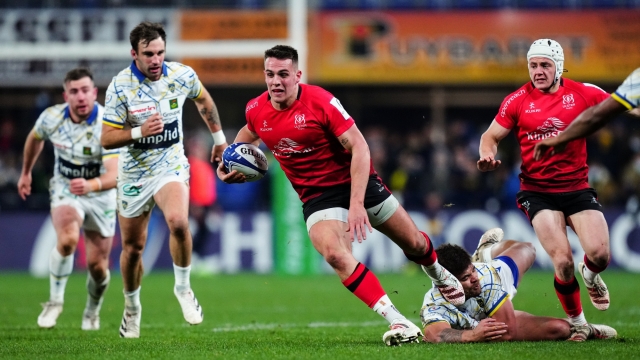 James Hume of Ulster makes a break against Clermont at Stade Marcel-Michelin. (Photo by Julien Poupart/Sportsfile)

Such was their dominance up front and dashing in the loose, it would have been a simple task to select the entire Leinster front row. Andrew Porter and Tadhg Furlong are joined, though, by Munster hooker Scott Buckley, who looked at home at the furnace on his senior debut.

Rónan Kelleher is extremely unlucky to miss out on selection, and Leinster teammate Ryan Baird is hard done-by in the second row. Alan O'Connor of Ulster is joined there by Tadhg Beirne, who made three big turnovers in the win over Wasps.

Rhys Ruddock, Josh van der Flier, another couple of Leinster forwards, Conor Oliver and Marcus Rea were all in the mix for back row. The eventual selection sees Connacht's Cian Prendergast joined by Munster pair John Hodnett and Daniel Okeke. Those two Munster men should be around challenging for starting berths for the foreseeable.