Although it was never part of the plan, a couple of weeks back, Munster handed out 12 senior debuts and still produced a bonus point win against Wasps, away from home.

Munster, who were without over 30 senior players due to Covid positives, close contacts isolating and injuries, handed five debuts in their starting XV against Wasps. The hosts themselves had Covid issues, with changes made to their match-day squad on the morning of the game.

END_OF_DOCUMENT_TOKEN_TO_BE_REPLACED

This was always going to take a mighty effort from Munster's mixed bag of experienced lads and newbies, and the first half [the whole game, in fact] was compelling stuff.

Munster forced the issue in the opening 30 minutes and went 6-0 ahead. Wasps captain Brad Shields was sent off for what was deemed to be a high tackle on the head of Dave Kilcoyne. It was harsh, but it was letter of the law stuff.

Wasps got a mini break when No.8 Alfie Barbeary started a counter-attack with an offload that was suspiciously forward, but play raged on. A few frantic phases later and Barbeary was stepping tackles and putting the hosts ahead with a converted try.

Munster were not done yet, though. Steaming forward, they drew an advantage call from referee Romain Poite. Conor Murray chanced his arm and dinked the ball over the top. The ball took a perverse bounce and sat up for Keith Earls to score. It could have got even better for Munster but wasps clung on at the end of the half despite being briefly down to 13 men. 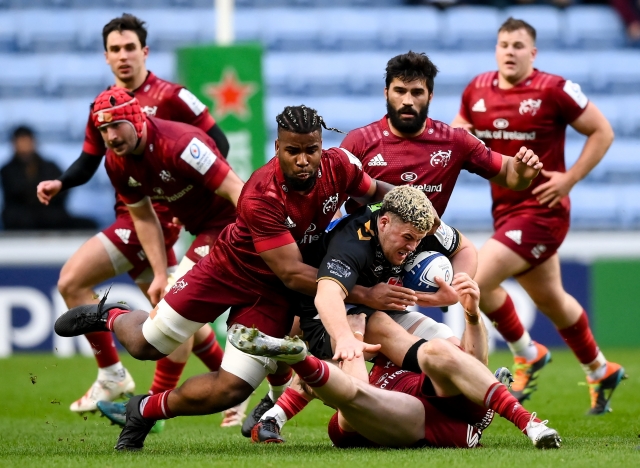 Alfie Barbeary of Wasps is tackled by Daniel Okeke, left, and Chris Farrell of Munster during the Heineken Champions Cup pool match. (Photo by Stephen McCarthy/Sportsfile)

With Dan Frost still in the sin-bin for Wasps, Munster started the second half with attacking intentions. They were rewarded when Tadhg Beirne made a fine carry up the right and made the extra numbers count out on the opposite wing.

19-year-old fullback Patrick Campbell, a former Cork minor footballer on his senior debut with the province, still had a couple of Wasps defenders to consider. He sized them up and simply sliced through them both.

Munster's young debutants get in on the scoring

The home side were creaking and Johann van Graan's men had their blood up. Nothing was coming without a price and that press forced a backline mistake that saw Andrew Conway latch onto a bouncing ball to canter clear and score under the posts.

Hooker Scott Buckley, who was also making his senior debut, was the man to score the bonus point clincher when he powered over with little resistance after a handy lineout move inside the opposition 22. Heading into the final quarter, the men in red were 32-7 ahead.

With 17 minutes to go, a glimmer of light for Wasps supporters. Centre Michael Le Bourgeois raced in against the grain and cut through tackle attempts by Eoin O'Connor and John Hodnett to score. Jimmy Gopperth converted and the deficit was down to 18.

If there were any thoughts of an unlikely Wasps comeback, a Joey Carbery penalty, on 66 minutes, put that to bed. It was an important kick for Carbery, who had been locating the uprights with some of his earlier kicks at goal.

The only black spot of a memorable day for the province arrived in the closing stages as Carbery suffered an arm injury and left the field in a makeshift sling. We will not see him again this year, and he may already be a Six Nations doubt.

Ahead of the game, captain Peter O'Mahony commented:

"You get a real insight into what we're producing in the academy and beyond. So it's been great that way, getting to know the guys has been brilliant but there's been loads of challenges."

This past fortnight, and what the shadow squad and those in isolation, will stand to Munster for the rest of the season. If they can end their 11-year wait for silverware, next year, many will surely point to this stretch of time. To get there, there will be even stiffer challenges. 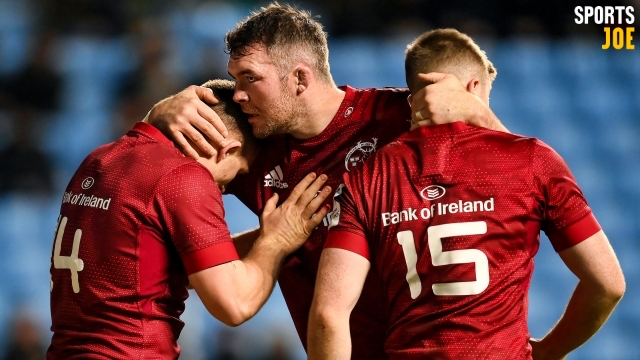 Our Man of the Match: John Hodnett (Munster Rugby)

You may also like
2 days ago
"Every team did it!" - Paul O'Connell on Roy Keane comment to Ronan O'Gara that he couldn't deny
2 days ago
"I've heard people tipping Wales to beat us. I was actually offended!" - Greg O'Shea
2 days ago
Five confirmed changes and guidelines to have big impact on 2023 Six Nations
2 days ago
"It's crazy to think Bundee Aki might come straight in and start against Wales"
3 days ago
Owen Farrell praises Johnny Sexton in revealing interview ahead of Six Nations
6 days ago
RFU issue statement following backlash over decision to lower tackle height
Next Page