"It's been a challenge for us."

Peter O'Mahony is exuding as much confidence as possible ahead of Munster's Champions Cup opener against Wasps.

The souther province are currently without a slew of senior players as they are either isolating in hotel rooms or back in South Africa. 14 of their travelling party that headed to South Africa for United Rugby Championship rounds six and seven were forced to remain in the country after testing positive for Covid-19.

END_OF_DOCUMENT_TOKEN_TO_BE_REPLACED

While Scarlets were forced to forfeit their Champions Cup opener against Bristol Bears, both Munster and Cardiff, who were also affected by positive Covid cases in South Africa, are planning to fulfil their fixtures.

What helps Munster is the fact that most of their Ireland internationals were not in South Africa for the first game on their schedule. They were given some extra time off after the Test window. It means the likes of O'Mahony, Conor Murray, Keith Earls, Dave Kilcoyne, Tadhg Beirne, Joey Carbery, Craig Casey and Springbok centre Damian De Allende are available for selection. Chris Farrell is set to feature too. 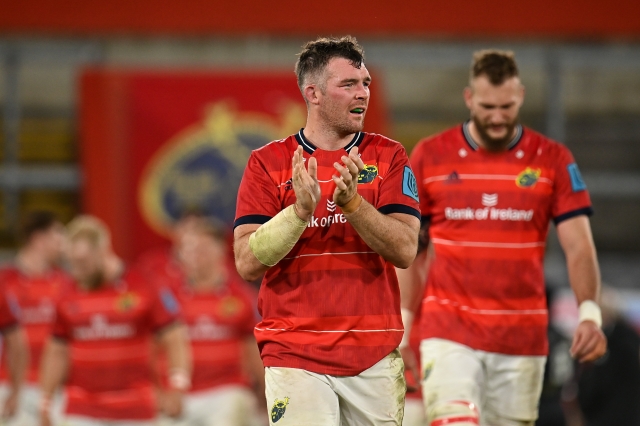 END_OF_DOCUMENT_TOKEN_TO_BE_REPLACED

With Munster boss Johann van Graan still quarantining in a hotel, academy coach Ian Costello has been overseeing the makeshift squad of internationals and youth players in their preparations.

The Munster captain says he has enjoyed the challenge that has been thrown his side's way.

"We've been through plenty at this club during my time here. This wouldn't be near top of the list"

END_OF_DOCUMENT_TOKEN_TO_BE_REPLACED

Asked if he was imparting much advice on the young players, many of whom had never trained with the senior squad before, O'Mahony responded, "All I said was, 'Ask questions and enjoy yourselves'."

"Look," the Cork native added, "I'm not going to sit here and say it's been ideal or what we were expecting.

"It's been a challenge for us, it's been great to see some of the young fellas that mightn't have popped into us over the next few months to be in and be a really important part of our training for the last two weeks.

"You get a real insight into what we're producing in the academy and beyond. So it's been great that way, getting to know the guys has been brilliant but there's been loads of challenges.

"Normally when it comes to a European Cup week you're kind of fine-tuning but we had sessions where we were going back to some of our core stuff, trying to get guys up to speed.

"But look, that's been a test as well for some of the leadership guys and the international guys who are still here. It's been a really enjoyable couple of weeks for us."

There was a moment of levity in the online press briefing as O'Mahony joked about how young some of his teammates on Sunday were. 34-year-old winger Keith Earls was caught in the comedy cross-fire.

"I trained with a guy that was born in 2004 the other day. We reckoned Earlsie could be his father!"

Making the most out of a tough situation.

Munster's Sunday clash with Wasps, in Coventry, will be a compelling watch.


popular
World Cup 2022 Day 14: All the major action and talking points
From Ireland to Argentina: Alexis Mac Allister's Irish roots explained
Shay Given on how far Ireland could've gone at the 2002 World Cup with Roy Keane in the team
Ronaldo finally reveals why he got that hideous haircut
The SportsJOE Friday Pub quiz: Week 3
After 18 years, one of the game's greatest stalwarts calls it a day
The story behind Nate Diaz's backstage scuffle with Clay Guida's team during UFC 199
You may also like
1 week ago
"Two Irish players are best in the world" - Rugby reacts to big Josh van der Flier and Terry Kennedy awards
1 week ago
Two baffling omissions as four Ireland stars make World Rugby 'Dream Team' of the Year
1 week ago
Josh van der Flier claims World Rugby Player of the Year at Monaco ceremony
1 week ago
"Highlight of my Ireland career" - Behind the scenes as Jack Crowley and Ross Byrne covered for a legend
2 weeks ago
Bundee Aki reminded us all of his best qualities, on a night Ireland couldn't do without him
2 weeks ago
Peter O'Mahony delivered some fitting Jack Crowley comments after surprise Test start
Next Page