Pic: Patrick Reed took off his hat and showed the world the worst golfer forehead tan line of all time

The Tournament of Champions concluded in Hawaii last night, with Patrick Reed beating Jimmy Walker in a play-off to get his 2015 off to the perfect start.

But in the aftermath of the event, it was Reed's chronic case of 'golfer's forehead' that sent Twitter into a flurry.

Also, Patrick Reed has a major forehead tan line. I guess it's acceptable when you win the tournament at Kapalua pic.twitter.com/aWK0qDvxeL

We wondered was it just a ddgy TV screen but this shot by Getty shows that Reed's forehead is considerably less sun-kissed than the rest of his face. 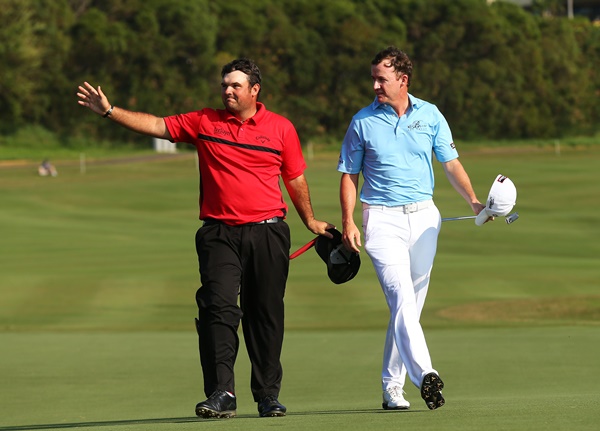 Having to wear a hat at all times on the course is a must to keep the sponsors sweet but surely Patrick could do a bit of sunbathing off the course to ensure the top half of his head is the same colour as the rest of his face...


popular
"Johnno went, 'We’re not moving! You're trying to mess us about!'" - Ben Kay recalls red carpet controversy
"Some of the generals wanted me executed" - Irish rugby legend on flag caper that went wrong
Tommy Fury spotted having the time of his life at student night out
Garry Ringrose challenges "pretty ridiculous" changing conditions for women's players
Peter Keane's future as Kerry manager in doubt after strange statement
No Simon Zebo or John Cooney as Ireland gather 50 players for one-day camp
Deontay Wilder calls Tyson Fury 'one of the biggest cheats in boxing'
You may also like
2 years ago
Patrick Reed is copping grief for how he presented Tiger Woods his green jacket
2 years ago
Patrick Reed breaks silence about Jordan Spieth decision in sensational interview
2 years ago
Final question of Ryder Cup press conference has Team USA in all sorts of trouble
2 years ago
Butch Harmon was absolutely disgusted to Patrick Reed's reaction to winning his match
2 years ago
Patrick Reed's wife sensationally suggests Jordan Spieth 'did not want to play' with him
2 years ago
Patrick Reed made to look foolish after his cocky reaction to European crowd
Next Page