It was 2016 in Hazeltine, Minnesota when, with the adrenaline of the Ryder Cup pumping through his veins, the world saw a different side to Rory McIlroy.

It was a confrontational, fired-up scene as, not only did the Down man try to beat Patrick Reed, he tried to beat the American crowd too during one of the most riveting singles match-ups in the competition's history. Long putts led to cupped-ears, hole-outs to call-outs - at one stage, Rory told the American crowd he couldn't hear them - Rory's abiding memory of that day, with the drama eventually taking its toll, is that Reed took the points.

And so, disappointing as it may be for spectators who only love the spice, Rory won't be making the same mistake again.

END_OF_DOCUMENT_TOKEN_TO_BE_REPLACED

"I certainly will try to not be as animated and I'll try to conserve some energy," he said to reporters today.

"It's a long week. If you try to beat the crowd, as well, it seems like a bit of an impossible task. I will try my best for this team and I'll try to play the best golf I possibly can, but I sort of learned quite a few things from 2016 about conserving energy.

"I felt like I sort of hit a wall on the back nine against Patrick that day, and I want to make sure that that doesn't happen again."

But this man is still ready for battle. With his clever motivational videos, team Europe captain Padraig Harrington has made sure of it.

"Padraig played a video for us last night to put this whole thing into context," said McIlroy.

"We have this thing this week where we've all been given a player number, so there's been 164 players that have played for the European Ryder Cup team, or GB&I as it was way back in the day. 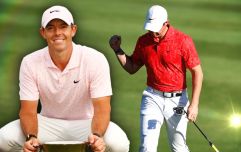 END_OF_DOCUMENT_TOKEN_TO_BE_REPLACED

"So that's a pretty small group of players. I'm No. 144; I think Lee is No. 118. But then you just look at all the players before you, and you look at Bernd Wiesberger who's making his debut this year who's No. 164.

"So very few people can call themselves a European Ryder Cup player.

"570 people have been into space. I think over 5,000 people have climbed Everest. 225 have won a men's major. When you sort of break it down like that it's a pretty small group and it's pretty cool."

By the sounds of it, Harrington is pushing all the right buttons. 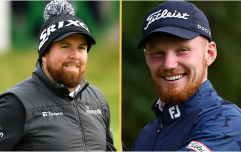 END_OF_DOCUMENT_TOKEN_TO_BE_REPLACED

As for his tendency to go cap-less on Ryder Cup week, Rory doesn't sound like a man who's about to break tradition.

"They made some for me, so that's a start. So I've got some that fit. Maybe. I don't know. It's sort of become my thing in the Ryder Cup to not wear a hat, but I don't know. We'll see."

Meanwhile on team America, Brooks Koepka and Bryson DeChambeau appear to have, for the weekend at least, sealed old wounds.

Brooks and Bryson, teammates on the range. What a sight.

"You know, again, a lot of this social media stuff has definitely been driven by a lot of external factors, not necessarily us two," commented DeChambeau.

"We (him and Brooks) had a great -- we had some great conversations TOUR Championship week when we had dinner, and then this week, as well. I sat down and had dinner with him last night, and it was fine."

"I think there may be something fun coming up here moving forward, but won't speak too much more on that."


popular
Paul Scholes calls a spade a spade after comeback win
It's often forgotten that Tommy Walsh began his career with the same stardom and promise as David Clifford
Derry club win county final factfile games with extravagant set of jobs
Shane Walsh: 'That's not how I was coached to play football. No one was coached to play football that way'
Jordan Larmour primed for a season to remind everyone how good he is
Paul Scholes says Paul Pogba is a "daydreamer" and Fred and McTominay are "limited footballers"
Galway fans' frosty reception for Davy Fitz doesn't make any sense
You may also like
1 month ago
"A star is born!" - Americans gush as Leona Maguire beats their best
1 month ago
"It's such an honour to play with her" - English star blown away by Leona Maguire
1 month ago
Leona Maguire continues to roast Team USA as Europe take Solheim Cup control
1 month ago
Cantlay gives his take on being scolded by Bryson DeChambeau at BMW epic
2 months ago
McIlroy and Lowry right in the mix for Olympic gold in Tokyo
2 months ago
Ireland make respectful gesture during Parade of Nations at Olympic opening ceremony
Next Page