Eoin Murphy's voice is gone but that's only a small price to pay.

He called it the best day of his life when, last Sunday, Glenmore won the Kilkenny intermediate championship and became a senior club for the first time since 2005. That he was playing alongside his brothers Shane and Alan made it all the more special. That his whole family are steeped in the Glenmore club ensured that the joy of this win will last for a long time yet.

"We've been soldiering now from whenever you can start playing hurling. There's two small schools here. It's not the case that it's an overly big parish. When you are going out, you're going out with the boys. If you're doing anything, you're doing it with the boys. There's connections all over the field," says Murphy at the launch of Avonmore's new oat flavoured protein milk.
Advertisement

“We discussed it in the players' meetings, and just said, ‘Look guys, these are the best days of our lives, playing with our friends and brothers’. I've been hurling with Ger [Aylward], lucky enough to play with Kilkenny with him, but we've been hurling together since primary school."

“It was the best day of my life, no question about it, so far anyway."

He's the Kilkenny goalkeeper, he's one of the best goalkeepers ever to man a the posts but he's centre back for his club and now he's looking forward to a Leinster intermediate campaign. Murphy sees the win as a redemption of sorts having been part of the Glenmore team that was relegated to junior in 2014 and as he recalls the memories of 2005, when the club were initially relegated from senior to intermediate, it's clear how much it means to him to return.

“I was in the old stand roaring, bawling actually. I remember being down, bringing in a few water bottles, in underneath the old stand and I seen grown men roaring and bawling to be honest.

“Yeah, just at the weekend it was the other side of that. It sort of flipped so that’s where it was just a hugely emotional day to be honest with you and yeah, it was unbelievable to just experience that at the same time to be honest.”

On another note, sliotars have been a hot topic in hurling in recent times and with his county man Ned Quinn chairing an advisory group on a digital sliotar, Murphy gave his take on the sliotars currently being used.

"It's going to be an interesting one. When I first started hurling, the only sliotar we would have been using at county level would have been an All-Star Cummins ball, but now, if you're playing now - no-one uses same sliotar - so I think it is a great idea to have a uniform sliotar. Something had to come into just standardise, just to have the same one across the sport.'

Thick rims are a big no-no for Murphy, who says that gym work, rather than lighter sliotars are the main reason behind the long pucks you'd see in the game these days.

'The rims would be a big thing from my point of view as well because when we start training, whenever we're back, it's going to be winter, it's going to be freezing cold as it is. And the bigger the rim, the harder the sliotar is do you know and, you're just breaking your good hurls and that pisses me off to be honest. And as well, you're catching a big rim in the freezing cold, you're going around for six/eight weeks with bruising in the palm of your hand and across your knuckles from catching sliotars. That's the only thing. Once the rim is shaved off down to a reasonable enough level, I don't mind too much."

Elsewhere, Murphy is looking forward to crossing paths with his old team-mate Henry Shefflin in this year's Leinster championship.

"I won't be going looking for his autograph or anything like that," he joked.

"It would be much worse for the Ballyhale guys because they've been soldiering with him for a good few years playing and then obviously coaching as well.

"We warned TJ [Reid] already, if Henry's calling up looking for any information, he better kick him back out the gate." 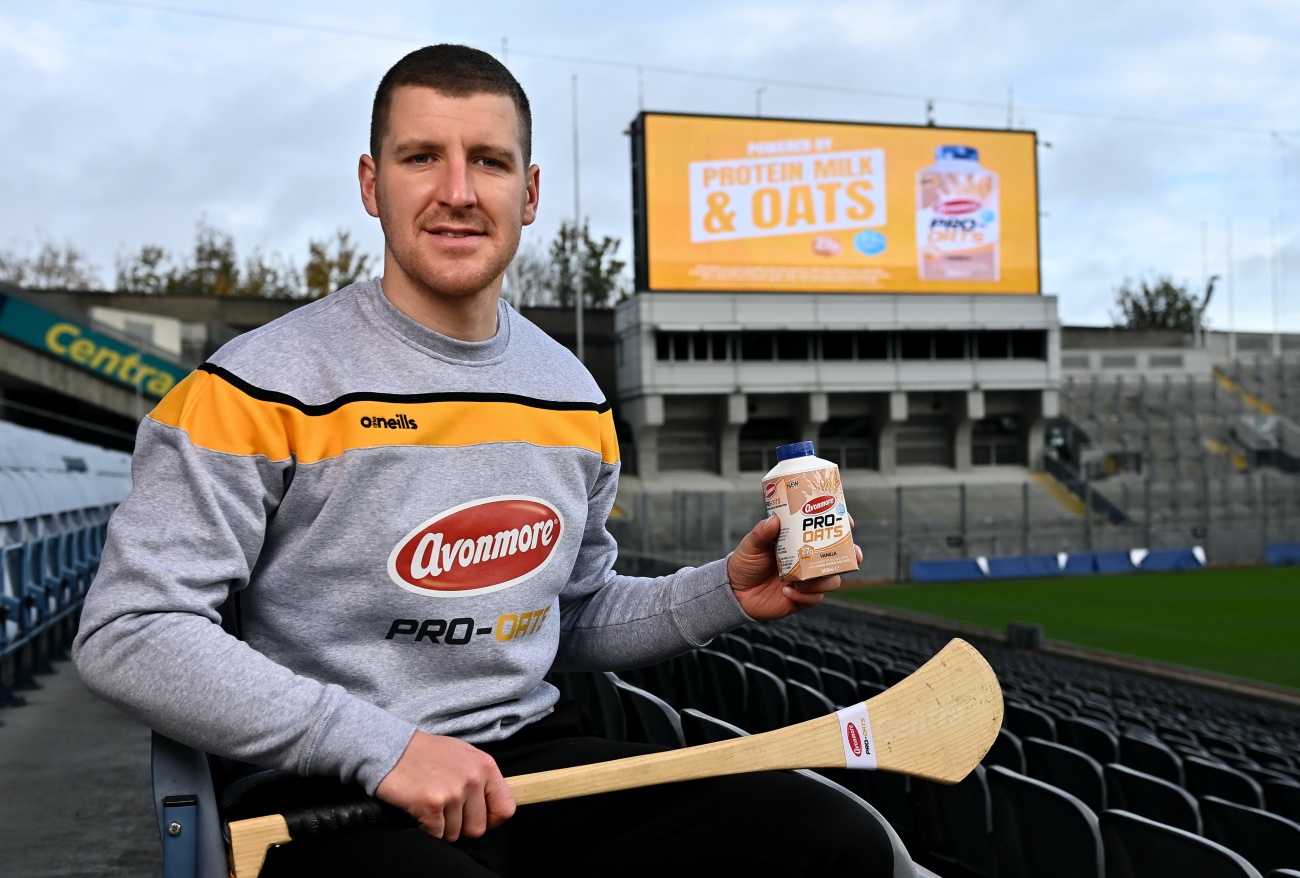 Avonmore Protein Milk are teaming up with Dublin footballer Brian Fenton and Kilkenny hurler Eoin Murphy, to launch the new Avonmore Pro-Oats product. Fenton and Murphy who have nine All-Ireland Championship medals between them were representing the Gaelic Players Association, of whom along with the GAA, Avonmore Protein Milk are a long-standing supporter. In attendance at the launch is Kilkenny hurler Eoin Murphy at Croke Park in Dublin.


popular
Gearoid Hegarty's harsh red card leads to a heated debate in The Sunday Game studio
French media rave about Caelan Doris and 'Playstation rugby' from Leinster
Liverpool and Chelsea fans go viral after bizarre FA Cup final confrontation
Tailteann Cup draw doesn't pass without controversy as repeat-pairings and regional draws come under scrutiny
Chelsea team-mates 'shocked' as Andreas Christensen reportedly refused to play in FA Cup final
Austin Gleeson sent off as Seamus Harnedy stands up again with an absolute stormer
Phil Bardsley in heated tunnel exchange after controversial penalty
You may also like
1 day ago
Familiar feeling for the Dubs as Kilkenny rack up a cricket score
5 days ago
"I realise on the far side that all of that stuff is not what it's cracked up to be." - 2011 reunion allows O'Sullivan to take it all in
6 days ago
"Jesus, no, if he finds out, he'll think I'm going soft now." - the social life of inter-county GAA players
1 week ago
Buff Egan calls it as Laois skin the Cats in O'Moore Park
1 week ago
From a hurler to a super-sub to a starter who's determined to keep his place
2 weeks ago
"It's important to me to get our second team a bit closer to the first team" - Brogan does it for the club
Next Page