You don't need bells or whistles when Aron Shanagher's in town.

Forget the system, hand-passes can go to hell, don't even entertain that runner off the shoulder and any way you like, you let that ripper of a thing into him. Just like they did in the good-old days, when full forwards did exactly what they said on the tin.

In this age of tips and taps you'd want to enjoy it because you could be waiting a while to see the likes again.

Here comes another puck-out and it won't be long before you'll see a corner back, acres of space left and right, sauntering out the field with all the urgency of a council worker holding a shovel on a hot day. Eventually, if only to be seen to be doing something, corner forward closes in and the pop-pass goes to wing back who'll go either one of two ways. They'll do the same thing again, working it calculatedly and methodically up through the lines, or they'll lamp the thing dead.

All the while full forwards and lethal weapons like John McGrath, like Alan Cadogan and Patrick Horgan are standing inside, heads shaking and hands outstretched, strangers in their own system. It's hard to see someone like Dan Shanahan putting up with it. In front of the tv screen they'll say the hurling isn't what it used to be and even though it's early days and it's only the League, the 2020 Championship was full of this type of thing so don't be expecting revolutions in 2021.

And then the Clare lads looked up to see Aron Shanagher. Having had their ears clipped up in Belfast last weekend, it was hardly any surprise to see the fire in Brian Lohan's team's belly. When you've watched Tipp and Cork play to plan the night previously, it was a bit of a surprise though to see Jack Browne, to see Cathal Malone and Ian Galvin taking on the non-percentage pass, and letting it into the man on the square. A pass that wasn't 100% guaranteed to reach its destination, what is this!?

Shanagher loved it and Lohan must have loved it too, as the athletic Wolfe Tones forward won a penalty, had his marker-sin-binned and swam high into the clean sky as the high balls went in and didn't come out. He caught them over Joe O'Connor, he caught them over Matthew O'Hanlon too and until Liam Corry was sent off for chopping timber, he had Clare well on their way. It was great to watch and hopefully it's not too unreasonable to ask for some more of it as a summer of hurling nears.

In the age of short, low-risk passing, nobody loves the high ball in like Aron Shanagher.

The big @wtnsgaa full forward is an out-ball, a handful and he's a joy to watch. pic.twitter.com/CXb4oDv37F

Shanagher was a joy but Rory O'Connor, as he so often is, was the man. For large parts, Davy Fitzgerald's team played like that 2020 hangover was fresh in their heads, but then their St Martin's greyhound sensed tired legs and he found space. 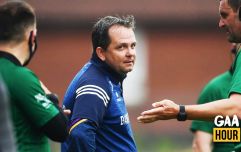 END_OF_DOCUMENT_TOKEN_TO_BE_REPLACED

There was a sign of sharpness early on as after the first water-break, O'Connor didn't return to the field with the rest of the team. He stayed down on his hunkers and with Davy Fitzgerald nowhere to be seen but written all over it, he shot the breeze with a Wexford selector. Soon as Mark Fanning lined it up, O'Connor was in like Flynn to collect a handy puck-out. Fergal Horgan pulled it back, presumably because O'Connor was off the field of play before the puck was taken. But the idea was good and so was the execution.

When you've Rory O'Connor hurling like he's hurling you can win a game that you never looked like winning. pic.twitter.com/3YCr7TEcF9

When the game was there to be won, O'Connor won Wexford a game that they never looked like winning. First he hit a couple of creamy points, then he drew Corry's red card but best of all, he set up Chin's game-changing goal.

There was more to come though, as from the sideline, the 23-year-old split the posts with a late free to win it on a final scoreline of 2-19 to 1-21.

popular
Danny Murphy's comments on BBC tonight prove some folks will never learn
England and Scotland fans clash in incredibly underwhelming set of handbags
Tyrone shoot the lights out with no fewer than 11 goals against Wexford
"He looks the fool now" - Didi Hamann took exception to one magic Ronaldo moment
Cristiano Ronaldo is not human. Not human at all
Only old-school fans will get 20/20 in this 1990s footballers quiz | Part 2
An important moment in football history: Gareth Bale lets his hair down while playing for Wales
You may also like
2 weeks ago
Davy Fitz sent to the stands for rowing with Darren Gleeson
2 weeks ago
"David Tubridy's not going to win anything realistically. I don't know how he does it."
3 weeks ago
Cork's baby-faced assassin puts Clare on playoff collision course with Mayo
3 weeks ago
"Both Clare players tested negative. They were disrupted all week. They're the victims in all of this."
1 month ago
Sensational scenes in Belfast as Antrim edge out Clare in a thriller
1 month ago
"He would be proud of me now playing for Clare. That’s what keeps me going"
Next Page