12 month bans have been proposed for players and spectators from Oulart-the-Ballagh and Naomh Barróg after their recent row in the Leinster intermediate hurling quarter final.

Things got very heated in Parnell Park a fortnight ago, when an altercation broke out on the field and then extended into the stand. It was notable from some of the footage that was widely shared that, up in the stand, a hurl was wielded among the commotion.

The Leinster council have since proposed lengthy bans for some of the players and spectators involved in the row - with six individuals, at the very least, believed to have been sanctioned. END_OF_DOCUMENT_TOKEN_TO_BE_REPLACED

The Irish Examiner have reported that, on the back of the Leinster council investigation, it is Oulart-the-Ballagh who have been punished more severely.

Oulart's Declan Buggy and Tommy Storey were the only men who received red cards during the incident - both men had started the game but had been substituted by the time the row broke out - and they are among the Oulart-the-Ballagh players who have been sanctioned.

This has become all to common in #GAA #NaoimhBarròg v #Oulart. #LeinsterGAA
Fans getting g invited as well as teams. pic.twitter.com/E6jjvrUyvH 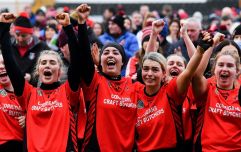 END_OF_DOCUMENT_TOKEN_TO_BE_REPLACED

Naomh Barróg were rank outsiders going into the game but they eventually came out on top, defeating the Wexford champs 3-1 on penalties. They will face Wicklow's Bray Emmetts in the semi-final of the competition this Saturday in Aughrim.

Oulart and Naomh Barróg may appeal these proposed bans, and they could yet seek a hearing. If the punishments are accepted, however, confirmation of the suspensions and fines is expected soon.


popular
World Cup Power Rankings: The top eight pundits of the tournament so far
Rory McIlroy explains 'falling out' with Shane Lowry that lasted a few years
Talksport presenter puts Martin O'Neill to the pin of his collar over Declan Rice and Jack Grealish
World Cup Power Rankings: The top 10 players at the tournament ahead of the quarter-finals
Ariel Helwani shares Paddy Pimblett WhatsApp messages as spat becomes public
Roy Keane scores winning goal past Micah Richards in ITV v BBC pundits match
Gary Neville sticks up for Ronaldo as contextless pictures and videos taken as gospel
You may also like
11 months ago
Prepare to cancel your plans this weekend as the GAA TV schedule is too good to miss
11 months ago
Jacob and the old guard inspire Oulart back to another All-Ireland final
5 years ago
Irish Olympian retires from boxing to return to his GAA roots
6 years ago
Fear of being labeled cowards drives David Redmond's Oulart the Ballagh All-Ireland ambitions
7 years ago
AIB GAA Club Camogie: Hurl of Honesty with Mullagh and Oulart The Ballagh
7 years ago
AIB GAA Club Camogie: Mullagh's Rachel Monaghan hopes family spirit can drive Galway side to glory
Next Page