Before Eric Donovan won his Irish featherweight title against Stephen McAfee last weekend, I asked him why he decided to go back into boxing after walking away from the sport.

Donovan was a talented amateur but left the sport he once loved through a mix of injury, personal issues and other options available to him, including study, but he had unfinished business. 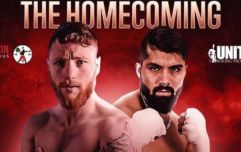 END_OF_DOCUMENT_TOKEN_TO_BE_REPLACED

And he did. He dominated Stephen McAfee at the National Stadium last month and now has his sights set on a European title.

Niall Kennedy's road into boxing was a little different. He didn't have a glittering amateur career. He only won one Irish title. He only started boxing professionally at 30 and yet at 34 he has compiled a 13-0-1 record with his sights set on going as far as possible as quickly as possible, with the Gorey native turning 35 next month.

When I rang Kennedy for the interview he had to delay our phone call for a few hours because he was taking some transition year students around with him in his day job with the Gardai.

Law enforcement pays his bills and the mortgage but boxing is his avenue to not only challenge himself, but to inspire others, including his young son.

"I had a baby boy there 19 months ago and it's been a bit of a struggle but I want him to look back in 15 years time and know that you don't give up," said Kennedy.

"That you keep fighting for your dreams. That's a massive thing and then the other side is that I want to show young fellas that are maybe struggling with mental issues that if you put the hard work in that you can get a good outcome out of it.

"In my main job, the job that pays the mortgage, I have a great opportunity to work with kids and hopefully be a stronger role model for them. I don't even know if I do have an impact on other people but I hope that with the kids in Gorey and the boxing club that I'm from that you would feel that if they were under pressure that they could come talk to me. 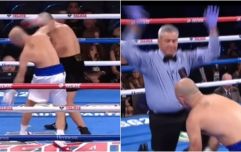 Spike O'Sullivan brutally knocked out after 164 seconds of title eliminator

END_OF_DOCUMENT_TOKEN_TO_BE_REPLACED

The Wexford native did not know his opponent until the weigh-in of the fight after a supposed bout with undefeated American Darmani Rock fell through and Kennedy feels like he's now at a stage where he's ready to kick on and really test himself among the heavyweight's top tier.

"You can't get complacent and you don't want to drop your level down so this time my coach Paschal Collins drilled it into me that we've a job to do. I'm 35 in May so I'm aware that I have to keep winning and keep performing.

"I'm not saying I'm at the top tier. Tyson Fury, Anthony Joshua, Deontay Wilder and Dillian Whyte are at the top level, then you have like Luiz Ortiz and a few others and my aim is to get to the top tier. Everyone should aim for the top and I believe I'm now ready to start taking on guys with good records. My aim for now is to get into the top 15 and that's still my aim." 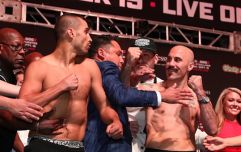 END_OF_DOCUMENT_TOKEN_TO_BE_REPLACED

Kennedy wants to fight again in the summer and ideally would like to fight three to four times a year but knows that his desire to stay active is largely tied to the promotional side of the sport but while he waits patiently for his next fight it's back to the drawing board in Corduff where he continues to learn from Collins.

"Against Marrone, Packie just wanted me to show aggression and killer instinct but it's still just little things for me. I still get in trouble everyday for doing things wrong but that's why we're practicing everyday in the gym; to get better.

"Even in sparring, most people try to go in and win spars but Paschal is meticulous. You'll do a spar and it can be frustrating because you might not win a spar but you're working and improving on one aspect of your game.

"Like distance is a massive thing for me and the position of your feet and to know how to be out of range but still be able to counter at the same time. It can be painstakingly annoying at times but it's still just repetition, repetition and more repetition."

The process stays the same, but hopefully for Kennedy and Collins, the stage gets bigger and the lights start to get brighter.


popular
Frank Lampard pays emotional tribute to Seamus Coleman in front of Everton squad
No need for Sky Sports to apologise as Shane Lowry stays in PGA mix
Rory McIlroy in awe of "unbelievable" Tiger Woods but better off without him
Rangers legend says he and Roy Keane didn't speak during Man United spell
Steven Gerrard makes Liverpool admission ahead of Man City title decider
Dele Alli praises 'legend' Seamus Coleman after Everton avoid relegation
Fan footage emerges from the moment Patrick Vieira 'kicked' Everton supporter
You may also like
4 years ago
Spike O'Sullivan's potential world title fight with Gennady Golovkin under threat
4 years ago
WATCH: 'And The New' - Gary O'Sullivan moves closer to a world title after brutal stoppage
4 years ago
"I want my kids to be able to say 'my daddy was champion of the world'" - Gary O'Sullivan chasing glory and security
3 weeks ago
Tyson Fury invites young fan into ring after Dillian Whyte victory
3 weeks ago
Tyson Fury confirms retirement from boxing after Dillian Whyte win
4 weeks ago
Dillian Whyte promises Tyson Fury rematch if he defeats him, despite no contract clause
Next Page