Katie Taylor's words to Eddie Hearn after she and her promoter laid out a rock solid case for her rematch against Amanda Serrano to be at Croke Park.

The Bray boxer pieced up Karen Carabajal to retain her cache of lightweight titles and delivered an emphatic interview about bringing 'the biggest fight in women's boxing' to Ireland, next summer.

END_OF_DOCUMENT_TOKEN_TO_BE_REPLACED

Hearn did likewise but warned Serrano, who Taylor beat on points earlier in this year, that they won't be waiting around forever.

In the post-fight press conference, at Wembley Arena, the very first question centred around what Hearn & Co. would do if the Amanda Serrano camp said 'No' to Croke Park. 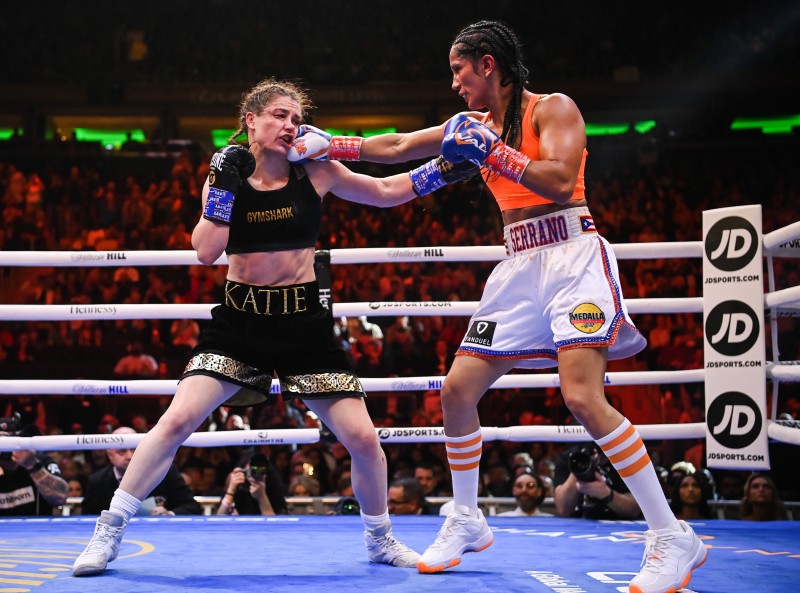 'Katie will fight anyone that is put in front of her'

Musing the possibility of an Amanda Serrano 'No' to fighting in Dublin, Eddie Hearn stated:

"There's no point asking Katie, because she will fight anyone that is put in front of her.

"We feel Croke Park is filled for any fight but I still think you want to take a super fight there. It is not just about a celebration of Katie Taylor’s career, it is about the biggest fight available. That's what she has always been about.

"So, we have kind of dug ourselves into a hole now. I’ve said it, it is happening and it is next. Whoever it is, it will be in Ireland. I just feel that is the perfect fight." 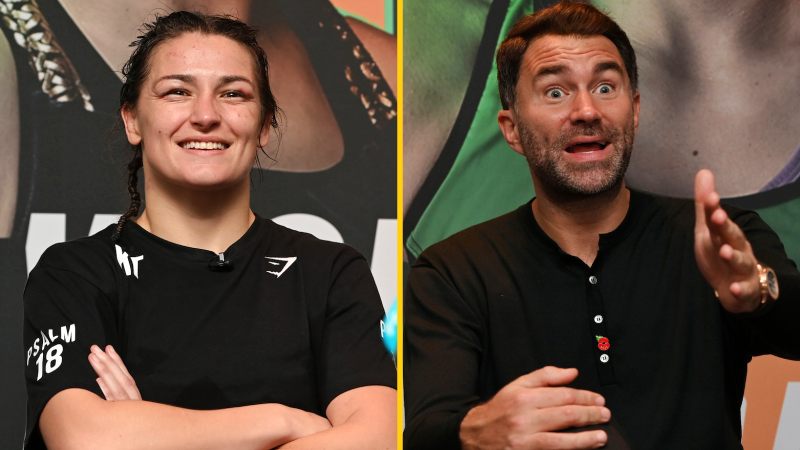 Should Amanda Serrano somehow not sign up for a summer 2023 clash with Katie Taylor, Eddie Hearn named four fighters that could definitely step up to the plate.

"Look, you've got a great fight next week between Chantelle Cameron and Jessica McCaskill for undisputed [champion] at 140.

"Alycia Baumgardner might step up to 135 pounds. You've got Holly Holm. You've got some great fighters out there but, to me, [Taylor vs. Serrano] was the best fight I've ever watched. So, naturally, we want to see it again."

Circled in red, Amanda Serrano is the fighter Taylor, Hearn and Brian Peters [her manager] want for her next title defence.

As for Croke Park, Hearn says he wants to be in a position by the end of this year where he knows if Croke Park is a reality 'because there's a lot of work to be done'.

"There's still a huge amount of logistics that need to be put in place for a large stadium fight like that. I don't want to drag it out until March or April saying to Katie, 'Yeah it's coming' and then you got to plan another fight and then you fight someone else in May or June.

"This is our one shot, next summer at Croke Park. The one shot to make it happen."


popular
Talksport presenter puts Martin O'Neill to the pin of his collar over Declan Rice and Jack Grealish
Rory McIlroy explains 'falling out' with Shane Lowry that lasted a few years
Roy Keane scores winning goal past Micah Richards in ITV v BBC pundits match
World Cup Power Rankings: The top 10 players at the tournament ahead of the quarter-finals
Gary Neville sticks up for Ronaldo as contextless pictures and videos taken as gospel
"There's no soccer, hurling, or rugby" - Kilcoo's secret to success
World Cup Power Rankings: The top eight pundits of the tournament so far
You may also like
1 month ago
Katie Taylor's post-fight gesture speaks of a champion fully aware of her legacy
1 month ago
Andy Lee gave a passionate Croke Park history lesson after Katie Taylor win
1 month ago
Katie Taylor delivers emphatic post-fight interview that should make Croke Park dream a reality
1 month ago
Katie Taylor puts on boxing masterpiece to retain world titles at Wembley Arena
1 month ago
"One, two down the pipe... lights out!" - Gary Cully tipped for greatness by Eddie Hearn
1 month ago
When, where and how to watch Katie Taylor's fight this weekend
Next Page