Katie Taylor cut one hell of a promo after summarily dispatching the latest, and previously undefeated, challenger to her throne. The Katie Taylor Croke Park train is gathering unstoppable momentum.

The queen of women's boxing was both regal and menacing as she picked Karen Carabajal apart to retain her lightweight world titles and move to 22-0 in her professional career.

END_OF_DOCUMENT_TOKEN_TO_BE_REPLACED

Eddie Hearn, her promoter, did his part by declaring, "For almost 30 years, Katie Taylor has been treading paths for others to tread. She's an absolute legend of boxing. she is an icon of boxing, and it is time for her to return to Ireland now... whoever it is, wherever it is, Ireland has to be next."

As for the whoever, Amanda Serrano stuck her hand up and asked for a rematch against the undisputed world champion [see below]. As for the 'wherever', Taylor left us in zero doubt about it. 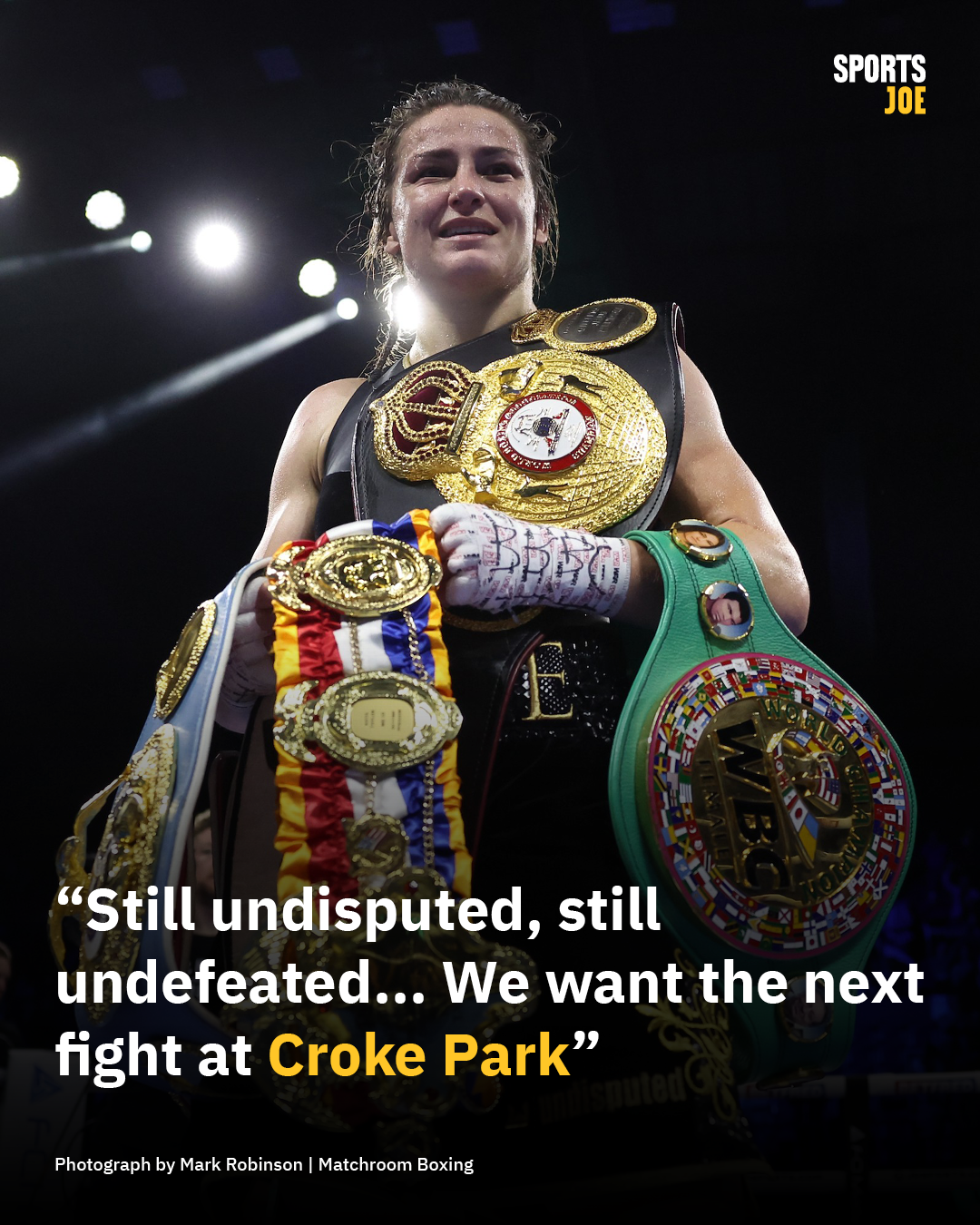 Asked who she would like to fight next, Katie Taylor appeared to be leaning towards that Amanda Serrano rematch, but the venue was at the forefront of her mind.

"Regardless of who it is," she told DAZN, "we want the fight at Croke Park!

Asked how likely it is that Katie Taylor will have what would be her first ever professional boxing match on Irish soil, and have it at Croke Park, Eddie Hearn revealed a date had been set at GAA headquarters but fell off the slate.

"We already had everything in place with Croke Park, with Brian Peters, the authorities. September the 15th, this year, we had been hoping to go.

"Amanda Serrano is saying the right things now. Honestly, time won't wait for Amanda Serrano. We hope it's her. It doesn't matter who it is, it's going to be the biggest fight. It has to be next, and it has to be Ireland."

Interesting, the Garth Brooks run at Croke Park was September 9, 10, 11, 16, 17. That means any hopes of Taylor Serrano II would have been put on hold because of all that would go into staging five huge concerts at GAA HQ.


popular
Man United could be blocked from playing in the Champions League next season
Ireland team vs. France: Form players rewarded and a welcome return
Clive Woodward happy to 'eat humble pie' after bold comments about Ireland
French media's opinion of this Ireland team becomes clear as vital clash nears
"I should have been more mature" - O'Sullivan's injury trail a cautionary tale for Sigerson casualties
Man City expect Pep Guardiola to leave
Man United's four player transfer shortlist if Qatar takeover goes ahead
You may also like
1 week ago
Katie Taylor's rematch with Amanda Serrano 'highly unlikely' to take place at Croke Park
2 weeks ago
Anthony Joshua agrees to face American heavyweight
2 weeks ago
Chris Eubank admits that he regrets "ugly build-up" to fight with Liam Smith
2 weeks ago
Liam Smith throws uppercut from the gods to stop Chris Eubank in fourth round
2 weeks ago
Floyd Mayweather announces his first ever UK fight at the O2 Arena
2 weeks ago
Liam Smith asks Chris Eubank if he is gay in the most bizarre press conference you will ever see
Next Page