Ciara Mageean will be brimming with confidence going into Rio 2016 after picking up 1500m bronze at the European Championships in Amsterdam on Sunday.

After a modest early pace, Portaferry's Mageean turned on the afterburners towards the finish line and came close to pipping Dutch fan-favourite Sifan Hassan for the silver. 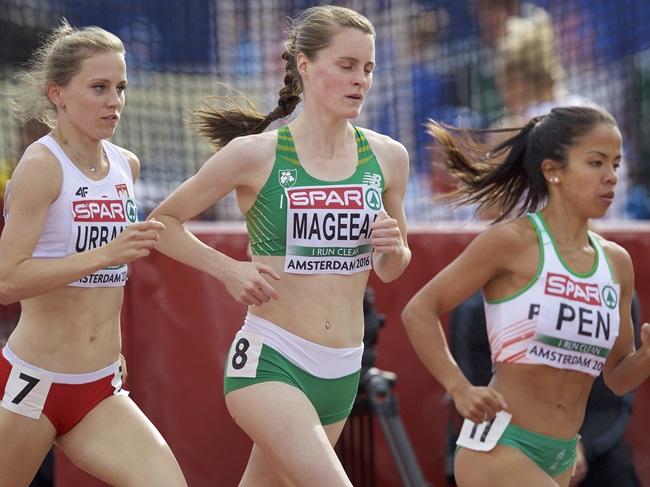 The 24-year-old crossed the line at 4:33.78, earning Mageean her first medal at senior international level in an event won by Poland's Angelika Cichocka.

Mageean, who has struggled with injury in her young career, qualified for this year's Olympic games when the qualification standards were revised by the IAAF.

Her resolute run to the line on Sunday afternoon, coupled with an injury-free winter of preparation, will have her hopeful of replicating her European showing in Brazil.

.@ciaramageean you're a hero!!! 🍀 I can't think of a more deserving medallist! #Amsterdam2016

Look at that final sprint! A hair width to silver! @ciaramageean you're my total hero! 🇮🇪☘ #ECH2016 pic.twitter.com/8Xej4sJ5bR


popular
World Cup 2022 Day 13: All the major action and talking points
Shay Given on how far Ireland could've gone at the 2002 World Cup with Roy Keane in the team
Skills, scowls and scores - Luis Suarez rolls back the years against Ghana
From Ireland to Argentina: Alexis Mac Allister's Irish roots explained
The World Cup 2022 team of the tournament so far
Jack Grealish says he regrets his comments about Miguel Almiron
The SportsJOE Friday Pub quiz: Week 3
You may also like
1 year ago
Katie Taylor's 2016 Rio defeat deserves further investigation according to corruption report
1 year ago
Boxing investigation finds at least seven suspicious results at Rio Olympics
3 years ago
Military coups, AK47s and gold medals - the remarkable story of how Ben Ryan guided Fiji to Olympic Sevens glory
4 years ago
Mick Conlan reveals Instagram message from man who robbed him of Olympic medal
4 years ago
Michael Conlan's embracing the lowest point of his career and making it his own
5 years ago
WATCH: Ireland's bittersweet sporting year summed up perfectly by top betting surprises
Next Page