When Paul Robinson finished in 4th place in the European championships in 2014, just 0.17 of a second off the podium, the world of athletics was at the 21-year-old's feet.

Medals were on the Kildare man's mind. The speed was in his legs and the ambition was there in his soul. 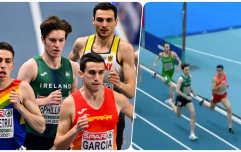 END_OF_DOCUMENT_TOKEN_TO_BE_REPLACED

Fast forward seven years and last night's 10th place finish in the 1500m at the European indoor championships might not seem like a result to write home about for an athlete of such genuine class, but when you consider what Paul Robinson has been through in the last seven years and where he's come from, you can see why his participation in the final is a victory in its own right.

The loneliness of the long distance runner rings true in Paul Robinson's journey from the brink. But that fighter inside him hasn't burned out yet.

From 2014 to 2016, the St Coco's runner trained like a demon in his manic desire to make it to the Rio Olympics. A pain that turned out to be arthritis in his toe didn't stop him and his persistence made the thing worse.

His own personal injury hell was only beginning as three achilles tears, sciatica from his back into his hip and a string of debilitating foot issues drove him so far off the boil that his tale of progression now was getting off the crutches and back to playing Gaelic football with his local GAA club.

Robinson wondered whether the dream was over but through his own will to succeed, through the guidance of a number of good athletics people like his coach Nic Bideau, he made it back.

“Immediately there is some disappointment to come in and come tenth.” said Robinson after last night's race. “but looking at from where I’ve come from, it's been a very positive championships for me, seven years since my last championships, that’s huge, to be out for seven years, and two rounds here back to back is pretty tough.

"I could see the bronze medal hadn’t gone away from us, but it was a little bit too much for me today..."

Achilles tears, arthritis in his toe, sciatica, the list goes on 🚑

This was Paul Robinson's first major championship in seven years and after his own personal injury hell, wasn't that some achievement to come back from it all to finish 10th in Europe 🇮🇪pic.twitter.com/uhySOcBoSA

Too much for today, but sometimes the joy is in the journey. Robinson's isn't over yet, and a trip to Tokyo this summer would be a well deserved destination.