Ciara Mageean ran the best race of her life to win the silver medal in the European 1500m in Munich.

For a while, as she led from the gun and then stalked Laura Muir's move at the bell, it looked like she might even take the gold but as she says herself, that's for another day. And that day will come.

That being said, tonight is a night she will remember forever.

END_OF_DOCUMENT_TOKEN_TO_BE_REPLACED

Having come up through the ranks as a youth and junior champion, as the second coming of Sonia O'Sullivan, Mageean has had pressure on her shoulders from a young age and there were times when that pressure got to her.

She's had good days since, she's had bad days too but this was her best ever day, as she ran bravely and brilliantly to win her third European medal. The last two were bronze but and this was her first silver.

It's no surprise that, afterwards, the Down woman was emotional as she chatted to RTE's David Gillick in the Olympic stadium.

"I rarely get emotional in athletics, but the year that I've had, I was going around there seeing all the tricolours and I'm feeling a little bit emotional, it's absolutely fantastic" the 30-year-old said.

"I knew that it was going to be tough, I had Laura and Sophie in my mind. In my warm-up, I even visualised Laura going from there and when it happened, I just told myself to go with her, I told myself to be her shadow.

'I was going around, seeing all the tricolours and I'm feeling bit emotional' - @ciaramageean reacts after her silver medal in Munich, paying tribute to the Irish young guns, gives a shout-out to Portaferry and the late Jerry Kiernan #rtesport
📺 https://t.co/W98hM5ljMT pic.twitter.com/VuJlAh8dSQ

"I did exactly what myself and my coach said I would do, and I stayed a hell of a lot closer to her than I did in the Commonwealth games. 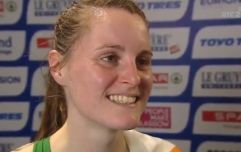 END_OF_DOCUMENT_TOKEN_TO_BE_REPLACED

"I tried my best to stick to her, but Laura's got the better of me on a good few occasions now.

"My time will come. This is what it's all about. I know that I'm there, and I'll keep trying for that gold, but to bring two silver medals home this summer, one for northern Ireland, one for Ireland," she said then, before kissing the Irish tricolour.

'Ciara Mageean, the former camogie player from Portaferry is a silver medallist at these European Championships' - The medal ceremony in Munich as Mageean is presented with the silver medal #rtesport #Munich2022 pic.twitter.com/CxX86xPwDo

"People ask you what you do it for, and all the hard work, and for me, it's this, getting to share it with everyone. I know everyone back home in Portaferry is shouting at the screen and everyone in Ireland is doing the same, like they do for every Irish athlete.

"The team has done fantastic, Rhasidat, Israel, all those, they're phenomenal. As one of the older Irish athletes on the team, I said I needed to show them that we can win medals and lead by example.

In what was a lovely touch then, Mageean paid tribute to all her coaches, past and present, including the late great Jerry Kiernan.

"Thanks to Helen (Clitheroe,) to Steve (Vernon,) to the late great Jerry Kiernan, he'll have the best seat in the house, to my first coach Eamon Christie and to everyone that's helped me along the way."


popular
Man United could be blocked from playing in the Champions League next season
Ireland team vs. France: Form players rewarded and a welcome return
Clive Woodward happy to 'eat humble pie' after bold comments about Ireland
Man City expect Pep Guardiola to leave
Man United's four player transfer shortlist if Qatar takeover goes ahead
The Ireland team Andy Farrell needs to start when France come to town
Erik ten Hag refuses to comment on Man City charges
You may also like
5 months ago
"Ciara was not afraid to lose tonight" - Sonia pays classy tribute to Mageean after record-breaking run
3 years ago
"My passion was camogie, athletics was going to be kicked to the curb"
3 years ago
"That's not bad for a wee girl from Portaferry" - Mageean gives an interview to match the performance
6 years ago
"It's still my dream to win an All-Ireland championship" - Irish Olympian Ciara Mageean
6 years ago
Ahead of the Rio Olympics this is how Ireland’s fastest athletes compare with the world’s elite
6 years ago
WATCH: Stunning run sees Portaferry's Ciara Mageean clinch bronze at European Championships
Next Page