We always have those kind of hopes and, in recent times, we've been living by those sort of targets but that was at European level and now, when it comes to Ciara Mageean, this is the global stage. And there's a big difference between them.

END_OF_DOCUMENT_TOKEN_TO_BE_REPLACED

Sonia O'Sullivan was the last Irish person to win a distance running medal on the global stage, way back in 2000 when she took the 5000m silver at the Sydney Olympics. A quarter of a century later and Ciara Mageean will be looking ahead with similar aims.

For now though, we must live in the present. Mageean has just had her best season ever, winning silver medals at the commonwealth games and the European championships but last night in Brussels - that was her best ever run.

Not only did the 30-year-old from Porrtaferry smash her own PB, with her time of 3.56.63, she also broke Sonia O'Sullivan's 27-year-old national record. Even more importantly, she did it by beating Laura Muir, the world bronze medallist from 2022, the Olympic silver medallist in 2020 - and the athlete who had pipped her in both of those championships this year.

That monkey is off her back now.

Mageean wasn't to be denied in this paced Diamond League event, and when she kicked down the home straight, none of her competitors could live with her.

Ciara Mageean kicks, and not even the world's best can live with her 🙌pic.twitter.com/E183BeoJ6P

It will have been all the more special for Ciara too that her Sonia O'Sullivan was there to witness it, and that she was there to congratulate her at the finish. 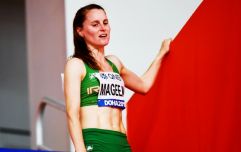 "My passion was camogie, athletics was going to be kicked to the curb"

END_OF_DOCUMENT_TOKEN_TO_BE_REPLACED

"Congratultions Ciara," tweeted Sonia with a picture of the pair.

"Winning Brussels Diamond league 1500m and new Irish record old record nearly as old as Ciara is young  Great to be in the stand to witness such a great race by Ciara who has had a great season and was not afraid to lose tonight," she added.

Congratultions @ciaramageean winning Brussels Diamond league 1500m and new Irish record old record nearly as old as Ciara is young . Great to be in the stand to witness such a great race by Ciara who has had a great season and was not afraid to lose tonight @Diamond_League pic.twitter.com/v5zFhuwNMh

This was some night for Ciara Mageean, where she picked up the guts of 10,000 euro in prize money, but here's to hoping the best is yet to come.

"There's a couple of occasions in your life where you manage to be in that zone and everything just comes together and you feel amazing. For me, that was today.

Ciara Mageean reflects on her Irish record with @PACESportsMgmt pic.twitter.com/fkIHVAvje9