Cian McPhillips has gears and on the biggest stage of his career, the 18-year-old romped up through them.

Toeing the outside lane in the second semi-final of the men's 800m, McPhillips looked right at home from the gun in this ferociously stacked European indoor championship field. 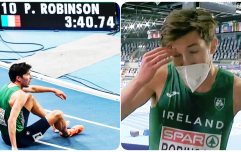 END_OF_DOCUMENT_TOKEN_TO_BE_REPLACED

There was pushing, shoving and plenty of jostling going on - standard procedure for indoor running - but McPhillips wisely stayed away from the messing and bided his bold bid to perfection.

Sitting in sixth place with only 300m to run, McPhillips made a purposeful and powerful burst before the bell which saw him leave three athletes for dead and from there, he never looked like fading.

Cian McPhillips, at just 18, reaches the semi-finals of the 800m at the European Indoor Championship after a controlled run in the heats. #torun2021 pic.twitter.com/ShLpAudhzk

He coasted home to take second and to book his place in Saturday's final. There he will be joined by Letterkenny's Mark English who despite losing his balance around the final bend, held his composure to take third place in his heat. Our third representative John Fitzsimons was just as gutsy in the third heat, but the Kildare man was narrowly edged out of the qualification spots. Joe Ryan - coach of Fitzsimons and McPhillips - will surely be pleased with the daring moves made by both of his athletes before the bell.

Cian McPhillips looks back on his big run in the 800m at the European Indoor Championships. #torun2021 pic.twitter.com/Cqwtm2wOWe From the fields of Tipperary to here, determined Tobin chasing down Olympic dream

END_OF_DOCUMENT_TOKEN_TO_BE_REPLACED

Elsewhere, Ireland's fastest female Phil Healy qualified for the final of the 400m having won both her heat and her semi-final. The Cork athlete would now appear to be Ireland's strongest medal hope at these championships.

In the men's 1500m final, Andrew Coscoran and Paul Robinson acquitted themselves well to finish in seventh and ninth respectively, in a highly competitive field. Jakob Ingebrigtsen strung the whole field out with a blistering pace, and he kept it up to cross the line in first place. The Norwegian was subsequently disqualified for stepping out of his lane, however, with Poland's Marcin Lewandowski taking the gold in controversial circumstances.