Having knocked on the door in his heat and semi-final, the Irish sprinter saved his best performance for the final as he ran a 10.17 time to beat Paul Hession's record by one hundredth of a second.

Hession, the Athenry native, set his mark back in 2007 in Finland and here in Munich, this was another famous night for Irish athletics. As one of the youngest athletes in the field, Olatunde wasn't expected to feature but as it turned out, with his sixth place finish, he ended up only four hundredths of a second away from the bronze medal.

END_OF_DOCUMENT_TOKEN_TO_BE_REPLACED

"To be able to call myself the fastest man in Irish history is just amazing," Olatunde told David Gillick on RTE Sport afterwards.

"To be here in a European final, finish sixth and get a national record, I just can’t believe it to be honest. I had no idea I ran that fast. It's a dream come true," he added.

It would have been daunting for many, starting out in lane seven, on the right hand side of the Olympic champion Lamont Marcell Jacobs, but Olatunde revelled in the occasion. Jacobs did come out on top with his time of 9.95 but it was all tight in behind, with Olatunde beating Great Britain's Reece Prescod - a former European silver medalist, into seventh place.

"The atmosphere was amazing, the crowd was amazing. These are the fastest guys in Europe and I’m up there with them. I’m so happy to be there and I know I can definitely improve so I’m looking forward to that.

"Thank you to my coach (Daniel Kilgallon), my training partners, my family, my community, everybody that has been supporting me and showing me so much love. It has pushed me on to get to this point, so I'm really so grateful."

"I think just believing in myself and my faith. Believing in those people around me that have been supporting," he added. 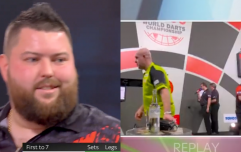 END_OF_DOCUMENT_TOKEN_TO_BE_REPLACED

"It has been a long journey to get here. I know I’m still young and I have a long way to go but I’m grateful for the journey I have been on to get to this point.

"I know this isn’t going to be the end. I’ll look back on the season with my coach and see what we can improve on.

But first up, it's Friday morning's 4 X 100m relay, where Olatunde will lead the Irish team.


popular
Allianz National League Round 2: All the action and talking points
Ireland vs Wales: All the big talking points, moments and player ratings
GAA defends their handling of Kilmacud Crokes and Glen replay saga
Paul Ince was "disappointed" in Erik ten Hag after Man United beat Reading
The SportsJOE Friday Pub Quiz: Week 9
Five confirmed changes and guidelines to have big impact on 2023 Six Nations
Everton release brutal 59-word statement to confirm Anthony Gordon departure
You may also like
4 months ago
"It is hard, especially when you’re 18 and I’d never left Ireland by myself," - Tuohy reflects on tough days after Grand Final win
4 months ago
Tuohy flies the Portlaoise flag high as Irish duo make AFL history
4 months ago
Tom Hardy wins yet another Jiu-Jitsu championship after emphatic finish
4 months ago
Roger Federer confirms retirement from tennis
5 months ago
Your guide to a huge weekend of football, rugby and Formula 1 and how to stream it all
5 months ago
Conor McKenna set to return to the AFL in huge blow for Tyrone
Next Page