"There are two people that work on her game, Emma and her dad Liam"

If ever he's training and he's down a football or two, St Peter's Dunboyne manager Brendan Quinn knows where to look.

He's gotten the call so many times at this stage that it barely even registers but who else could it be? To take frees, to practice shooting, to perfect her passing, Emma Duggan was on the line and she wanted the footballs. If practice makes perfect, then this explains a lot.

With stories like these, you'll often hear about the breakthrough at under-16, or about the player who came into their own at minor level but while it might not be the norm and while it sounds like chickens being counted, they already had high hopes for Emma Duggan in Dunboyne and in Meath by the time she'd turned 12. The word was good. 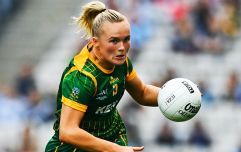 END_OF_DOCUMENT_TOKEN_TO_BE_REPLACED

For someone like Quinn, who has managed Duggan at club level for the last few years, it's hard to believe, given all the football she's played, that Emma Duggan is still just 19 years of age but as far as he can see and as long as he can remember, this forward has never been overcome by any challenge she's faced.

That's why, as Meath's star forward looks ahead to her biggest challenge yet when the Royals take on Dublin in the All-Ireland senior football final this Sunday, Quinn is backing Duggan to rise to the occasion.

"From the time Emma was 12 or 13, she's been spotted in Meath as being a talent both in club games and in county squads coming up. You'd sometimes forget how young she is - she's still just 19, she's just done her Leaving Cert - but she's been there since she was so young, she never gets fazed by anything and she's just so assured both on and off the pitch," says Quinn, who in a previous life was a defender on Na Fianna's championship winning teams.

On the pitch, Emma Duggan has it all. She may be a phenomenon, shooting the lights out at both club and county level, but this was no freak. Her dad Liam won a number of county championships with Portlaoise in the 80s and 90s and then when he moved to Meath, won another with Dunboyne in 1998. Emma has taken after her father and any time you pass the pitch, Quinn says, there's a good chance you'll spot the pair of them kicking around.

"There's two people work on her game," says Quinn, "herself and her dad Liam."

END_OF_DOCUMENT_TOKEN_TO_BE_REPLACED

"Emma is totally dedicated to her game. She'd be borrowing footballs off me the whole time to go kicking down at the field. Her sister and both her brothers play too and they'd be down as well."

It's an amazing thing when a prodigious talent meets a fanatical work-rate and when asked about her game-saving dispossession in the dying embers of Meath's famous All-Ireland semi-final win over Cork, Quinn's mind immediately turns to a minor game two years ago in St Margaret's.

"Meath played Dublin in a minor game two years ago, I think she was centre forward, and she chased a girl from centre forward to Meath's 21, won the ball in a tackle and then went up, ran the whole way back the field and scored a goal up the other end. She never stops, she just does the work and that's it."

Just as rare is a player who is equally adept off both left and right feet but if you'd seen her range of scores against Cork, if you've ever watched her for Dunboyne, you'd be left scratching the head wondering which foot is stronger. You could be wondering all day.

"She has quite a long range for ladies football," adds Quinn. It's very seldom that she drops the ball short. Very often in ladies football, a player would be struggling from 30 yards but Emma has such a powerful kick that it's never any problem to her.

"She's so talented, left and right - hand and foot. She's a very good head. A very good passer of the ball, a very good ball-winner, a very good score-taker. She really has everything in her game." 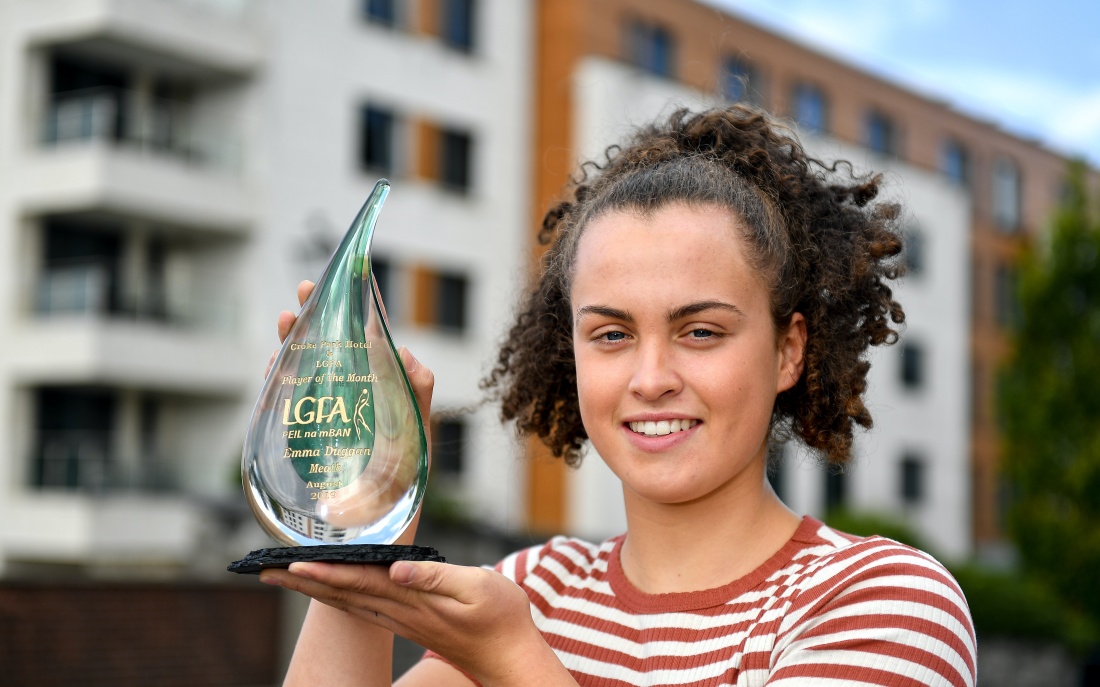 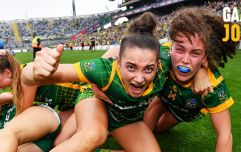 END_OF_DOCUMENT_TOKEN_TO_BE_REPLACED

This Sunday, as she looks ahead to an All-Ireland final against the five-in-a-row chasing Dubs, will mark her biggest game yet and while Dublin will assign one, maybe even two players to the task of shadowing Duggan, she won't be fazed.

"Emma will move around the pitch. She's never a static player. I'd say it will be Leah Caffrey who will take her up, they might even put two players on her. But to date, Emma has shown an ability to just eventually pop up in the right place. Like all the good players, she always seems to find herself in space and then her shot selection is very good as well. If it's not on, she'll throw it around.

"They're a battle hardened team (Meath), having lost those finals to Tyrone and Tipperary. Getting promoted in the League was huge for them. Holding their Division Two status and staying senior would have been a success! Look at them now!"


popular
Rob Kearney taught a classic GAA lesson when he tried to have the craic in second game back
The scenes in Newbridge as the biggest hit and hope ever knocks Moorefield out
Shane Lowry had no problem setting reporters straight at Ryder Cup briefing
'Solskjaer has started the new season the same, so why would you expect a different result?"
Rob Kearney on defying union "bigwig" that told him he'd never play GAA again
How one text message a teammate sent Kieran McGeary proves that Tyrone's success was a team effort
When Liam Brady lit into Brian Clough for his dismissive Mick McCarthy comments

You may also like
3 weeks ago
Seán Leonard makes up for late mistake as Meath crowned minor champions
1 month ago
"Just look at the smiles on people's faces" - Tyrone minor manager reflects on journey to All-Ireland final
2 months ago
"They definitely don't seem to have the same aura" - Dublin continue to struggle for top form in championship
3 months ago
After losing her hurl, Meath captain blocks with nothing else other than her bare hands
5 months ago
"These guys didn't even know what deodorant was" - How Meath's 'savages' prepared for Flynn for toughest challenge of his life
6 months ago
"When Sean Boylan was around, you didn’t need a psychologist or a counsellor - he did it all himself"
Next Page