Expect the big boys to return, but there could be a new-look centre partnership.

On Thursday, Andy Farrell will name his final Ireland team of 2022. His side are Triple Crown champions and beat New Zealand in an away Test Series, but he will be conscious that defeat to Australia, next weekend, would take a sheen off matters.

Ireland have beaten South Africa and Fiji in the Bank of Ireland Nations Series and, next Saturday, face a Wallabies side that have lost two thrillers, to France and Italy.

END_OF_DOCUMENT_TOKEN_TO_BE_REPLACED

Following Ireland's 35-17 win over Fiji, on Saturday, Farrell took a cut off his team's "awful" performance. While he praised the three new caps - Jeremy Loughman, Cian Prendergast and Jack Crowley - for pushing through in this Test window, he was not so complimentary of the entire group. He declared:

"Any Test match win should be celebrated, especially when you’ve got three lads making their debuts and Tadhg captaining the side for the first time. But as far as the performance is concerned, pretty underwhelming. When you look back and analyse a performance like that, you will get plenty of learnings out of it."

Given the tone of Farrell's press conference, and pitch-side, comments, we are expecting Australia to be met with a full metal jacket Ireland XV in the host's final Test match of an encouraging 2022. 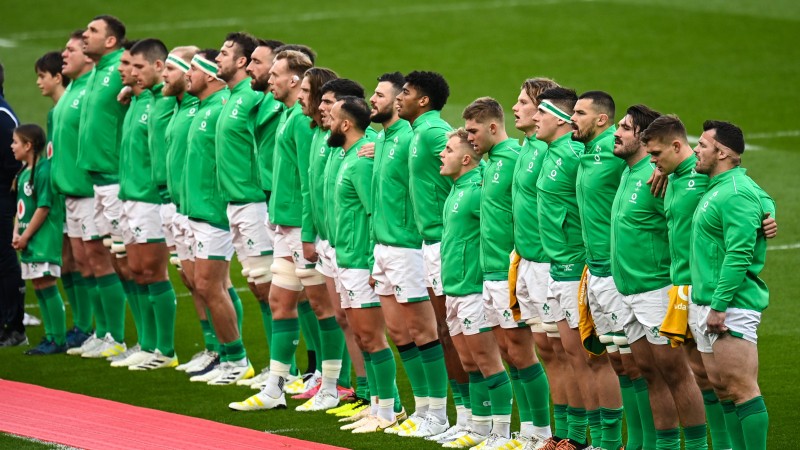 Ireland players stand for the national anthem before the Bank of Ireland Nations Series match against Fiji. (Photo by Harry Murphy/Sportsfile)

END_OF_DOCUMENT_TOKEN_TO_BE_REPLACED

After the team selection was made for the Fiji game, Andy Farrell said Hugo Keenan, Johnny Sexton, Josh van der Flier and Andrew Porter were all carrying knocks.

We know that Conor Murray is definitely out of the picture and Monday will tell us whether Robbie Henshaw will follow the Munster scrumhalf out of the squad. Joey Carbery took a hit to the head, forcing him off, but Farrell will be hopeful of being able to call on the versatile back. Should Carbery get ruled out though, we could see Jack Crowley on the bench, backing up Johnny Sexton.

END_OF_DOCUMENT_TOKEN_TO_BE_REPLACED

The Ireland pack all but selects itself, especially if van der Flier passes fitness markers. Nick Timoney did well against Fiji, but Jack Conan should get that back row replacement gig.

The biggest selection quandary will come when Farrell learns more on Robbie Henshaw. We suspect Ireland were err on the side of caution, and Henshaw will not feature. That leaves the head coach with a decision - keep Stuart McCloskey at No.12 or bring back Bundee Aki, fresh from his eight-week suspension.

Selection for the Test side can not come easy, so it will be interesting to see if Farrell keeps Aki waiting for another start until the 2023 Six Nations. McCloskey, in fairness, has done well in his two starts in this Test window.

You may also like
3 days ago
Shay Given on how far Ireland could've gone at the 2002 World Cup with Roy Keane in the team
4 days ago
From Ireland to Argentina: Alexis Mac Allister's Irish roots explained
1 week ago
Former England international admits he wishes he had played for Ireland
2 weeks ago
Two baffling omissions as four Ireland stars make World Rugby 'Dream Team' of the Year
2 weeks ago
Josh van der Flier claims World Rugby Player of the Year at Monaco ceremony
2 weeks ago
"Highlight of my Ireland career" - Behind the scenes as Jack Crowley and Ross Byrne covered for a legend
Next Page