Bundee Aki reminded us all of his best qualities, on a night Ireland couldn't do without him

"He's back up and running again."

Bundee Aki would have been hating the fact that he had to miss out on all the final training drills, captain's runs and the match-day experiences for Ireland, in the Autumn Nations Series.

A poor clear-out attempt on Stormers' winger Seabelo Senatla, followed by an on-pitch rant at the referee that sent him off, saw the Connacht centre banned for eight weeks, and guilty of puncturing a huge hole in his season. Indeed, Aki would have missed the Wallabies game had he not undertaken a World Rugby safety and tackle technique work-shop.

END_OF_DOCUMENT_TOKEN_TO_BE_REPLACED

As it turned out, weeks on from that sending off in South Africa, Ireland were in desperate need of their experienced centre against a Wallabies side that Andy Farrell would credit for making Saturday's match 'an absolute dog-fight'.

Aki was there, off the bench, to deliver the finishing, bruising carry over the Australian try-line after a surging Caelan Doris carry, sustained forward pressure and a fine Craig Casey laser. That converted score put Ireland 10-3 ahead and although Jordan Petaia responded with a converted try of his own, Ireland got a late penalty to win 13-10.

Allied to that, Aki put in a number of crunching tackles and dug in at the breakdown, and around the fringes. It was a display of his best, battling qualities and it could not have come at a better time.

Following the game, Andy Farrell gave an insight into Aki's involvement with the Ireland squad, during his ban, and credited the 32-year-old for making an impact when he was called up. Farrell said:

"He was the lucky one, he got over for us, for the try, at the end. Delighted for him. He's back up and running again." 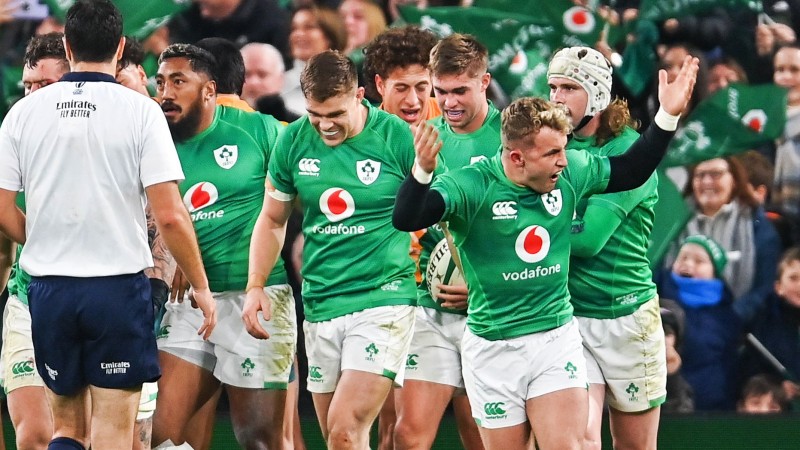 "The highlight of my Ireland career"

END_OF_DOCUMENT_TOKEN_TO_BE_REPLACED

Andy Farrell also found time to lavish some praise on another replacement that was key in Ireland getting the victory they needed.

Ross Byrne was only with the squad, on Saturday, as injury cover but he was having to get Jack Crowley's No.22 jersey off the Munster outhalf's hanger after the late calf injury to Johnny Sexton. Byrne came on for the closing stages and nailed a penalty kick that, ultimately, won Ireland the game.

"It’s awesome for Ross," said Farrell. "I was absolutely delighted for him.

"You know Ross' temperament, it’s made for him that type of situation where it’s deadlocked.

"It was a tough enough kick when the penalty came but there was no doubt in Ross’ mind that he was ever going to do anything but go for the three points, so fair play to him. He's waited for that chance and he delivered it and got us over the line."

Byrne himself was so thrilled with the late drama, and match-winning deeds, that he delivered his post-match chat with a broad grin across his face for most of it. "It's definitely the highlight of my Ireland career," he beamed. "That's for sure."


popular
Talksport presenter puts Martin O'Neill to the pin of his collar over Declan Rice and Jack Grealish
Roy Keane scores winning goal past Micah Richards in ITV v BBC pundits match
World Cup Power Rankings: The top 10 players at the tournament ahead of the quarter-finals
Gary Neville sticks up for Ronaldo as contextless pictures and videos taken as gospel
Rory McIlroy explains 'falling out' with Shane Lowry that lasted a few years
Cristiano Ronaldo's sister blasts Portugal boss' decision to start forward on the bench
"There's no soccer, hurling, or rugby" - Kilcoo's secret to success
You may also like
6 days ago
Shay Given on how far Ireland could've gone at the 2002 World Cup with Roy Keane in the team
6 days ago
From Ireland to Argentina: Alexis Mac Allister's Irish roots explained
1 week ago
Former England international admits he wishes he had played for Ireland
2 weeks ago
Two baffling omissions as four Ireland stars make World Rugby 'Dream Team' of the Year
2 weeks ago
Josh van der Flier claims World Rugby Player of the Year at Monaco ceremony
2 weeks ago
"Highlight of my Ireland career" - Behind the scenes as Jack Crowley and Ross Byrne covered for a legend
Next Page