Bundee Aki lost the run of himself at Danie Craven Stadium after he saw red for the third time in his professional rugby career.

The Connacht centre entered the fray early in the second half of a United Rugby Championship clash with Stormers, in South Africa. Eager to make an impact in his first provincial outing of the season, the Ireland star conceded a breakdown penalty that saw the home side extend their lead.

END_OF_DOCUMENT_TOKEN_TO_BE_REPLACED

The game had gone past the hour-mark when Connacht looked to be right back in the game, after a superb Mack Hansen line break. There was a forceful Aki clear-out as Connacht then pressed forward and Tom Farrell looked to have scored after claiming a high ball and dotting down.

However, referee Gianluca Gnecchi and his Television Match Official, Matteo Liperini looked back on what had been flagged in the build-up - that Aki clear-out.

Replays then showed Aki's shoulder connecting with the head of Seabelo Senatla, as he went in for the breakdown poach. It soon became apparent that Aki was heading for a red card. Referee Gnecchi told his TMO:

"Direct contact to the head and high degree of danger." 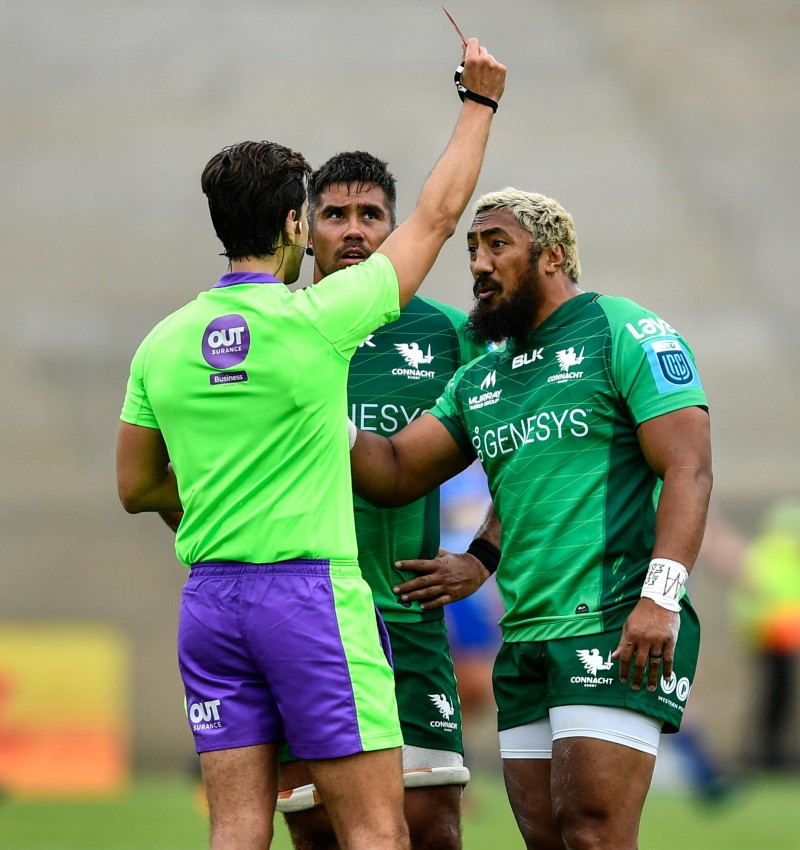 Bundee Aki of Connacht is shown a red card by referee Gianluca Gnecchi during the United Rugby Championship match between DHL Stormers and Connacht, at Stellenbosch in South Africa. (Photo by Ashley Vlotman/Sportsfile)

Gnecchi called over Connacht captain Jarrad Butler to give him his reasons for the red card. Bundee Aki saw the red card in the ref's hand and briefly lost the run of himself.

The Italian match official asked Butler to direct his player off the field. The try was also chalked off and 14-man Connacht were still 19-8 down, before Stormers grabbed two more tries in quick succession.

Arguing with the referee after the red was just as disappointing pic.twitter.com/reTgpCAWwP

Whatever your feelings on a decision, that’s not v professional from Bundee Aki. Perhaps that’s the point at which a captain needs to step in to descalate🤷‍♀️

Bundee Aki arguing. Wasting his breath. That was appalling. With huge force.

This is the third red card for Aki, over the course of his career, along with five yellow cards he received while playing for Connacht. The two other reds came when he was representing Ireland, against Samioa at the 2019 World Cup and England in the 2021 Six Nations.

This is not the first time the 32-year-old has confronted a referee on the pitch. During a Champions Cup defeat to Leicester Tigers, earlier this year, he fired a verbal volley at referee Mathieu Raynal. He would later apologise for the incident.

Like to apologise about my action towards the referee and officials, kids who were watching. Absolutely not needed in this game. Emotions were high and that is certainly not an excuse for my actions. Definitely will take the loss on the chin and will be looking at myself.

Stormers, the defending champions, went on to defeat Connacht while Ulster won a high-scoring match against Scarlets.

On Friday night, Leinster put Benetton Treviso to the sword at The RDS, with Dan Sheehan bagging four tries.