Andy Friend's Connacht were left heartbroken after enduring a late storm from Leicester Tigers. Bundee Aki could have some apologising to do, too.

"How that wasn't a penalty to Connacht, I don't know!" exclaimed Brian O'Driscoll.

END_OF_DOCUMENT_TOKEN_TO_BE_REPLACED

That was only the start of the drama as Leicester Tigers claimed a last-gasp try to stun their hosts. O'Driscoll felt Connacht should have had a penalty when Paul Boyle made a good poach attempt inside his 22. The match officials did not agree and play spread wide for Hosea Saumaki to score in the corner.

Initial replays looked like Saumaki had been dragged into touch, but closer looks showed the Tongan's foot bounced up and was therefore not on the line when he scored. It was enough to make it 29-28 and give the English side the win.

Leicester defeat Connacht with the last play of the game thanks to this try from Saumaki.

END_OF_DOCUMENT_TOKEN_TO_BE_REPLACED

Connacht players were disgusted with the decision, and Bundee Aki could be in trouble for confronting the referee after the full-time whistle.

The ref, Mathieu Raynal, told Aki he should look at the replays himself. In no uncertain terms, Raynal told Aki:

"If it’s not on the line, you will apologise."

Bundee Aki could well be looking at a meeting with the disciplinary panel after that. You might be disappointed - but that was out of order. TMO has looked close up on an HD tv at it, and decided it wasn't in touch. I hope he appologises to the ref once he collects his thoughts 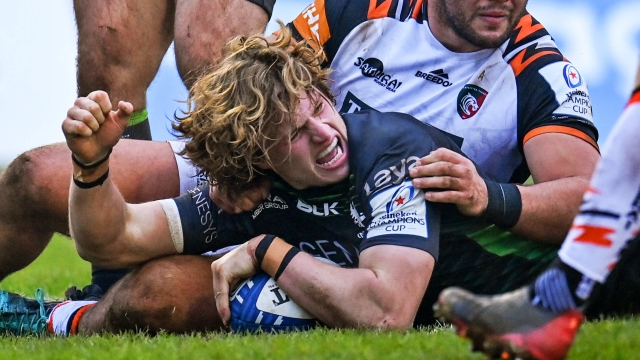 Leicester get off to flying start

Tigers, the Premiership leaders, scored two tries in the opening 10 minutes, and the only thing going the way of the hosts, at The Sportsground, was Freddie Burns missing two conversions.

Burns' misses may have been excused, somewhat, when home outhalf Jack Carty also saw the wind wisp away an early penalty attempt, but more was to come from the Westerners.

A strong rolling maul sucked in jerseys and, when Kieran Marmion opted to go wide, the ball went through the hands swiftly and Matt Healy teed up Tiernan O'Halloran to dive over. That gave home fans in Galway belief and that feeling only grew when Bundee Aki threw a great offload and, a few phases later, Can Prendergast bashed over to score. 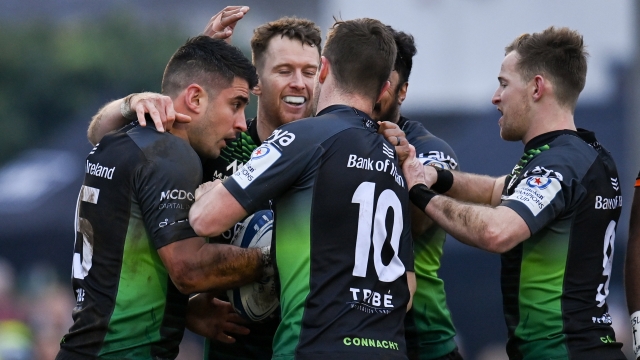 Tiernan O’Halloran of Connacht, left, celebrates after scoring his side's first try against Leicester Tigers at The Sportsground. (Photo by Harry Murphy/Sportsfile)

The hosts led 14-10 at the break, but started the second half superbly. Tigers flanker Tommy Reffell was yellow-carded as his side tried to endure an early onslaught. Marmion made them pay, through, when he took a dart and squirmed over to score.

The try-scoring bonus point arrived on 48 minutes off a set-play from an attacking Connacht scrum. Jack Carty converted and it was 28-10 with 30 minutes to play.

Leicester came into the match having won 13 of their last 14 games [they lost to Wasps in the league, last weekend], so they are made of stern stuff.

So it proved when back-row unit Jasper Wiese secured a fine turnover and, when the ball went wide, Kini Murimurivalu crashed over in the corner. Cian Prendergast made a great intervention to prevent a fourth Leicester try, but one sensed they would not be denied forever.

Sure enough, with seven minutes to go, Tigers hooker Charlie Clare got over amid a giant heave from his teammates to grab a crucial try. Burns nailed that conversion and it was a four-point game.

On came Leicester and we had that late Hosea Saumaki try, and all the drama that accompanied it.

How many times this season have we seen them win a match in the final moments? 🐯#HeinekenChampionsCup pic.twitter.com/fcqkLkbi9T

Connacht will be steaming over the calls that went against them but, from 28-10 ahead, they really should have finished this one out.

UPDATE: Bundee Aki has since apologised for his post-game confrontation of Raynal.

Like to apologise about my action towards the referee and officials, kids who were watching. Absolutely not needed in this game. Emotions were high and that is certainly not an excuse for my actions. Definitely will take the loss on the chin and will be looking at myself.

Connacht fans will hope the centre will not face any actions for his over-stepping of the mark, at full-time.