There was concern at Aviva Stadium, about 25 minutes before kick-off in the Bank of Ireland Nations Series clash between Ireland and Australia. Johnny Sexton, the Ireland captain, was nowhere to be seen, and Paul O'Connell was grabbing Jack Crowley and Ross Byrne for a word.

Sexton had been out on the pitch, earlier on the night, and had done the coin toss with Wallabies captain James Slipper. Perhaps, some wondered, the Ireland captain was just taking it as easy as possible before his final Test match of the year.

END_OF_DOCUMENT_TOKEN_TO_BE_REPLACED

Not so. At just after 7:40pm, some 20 minutes before kick-off, the IRFU confirmed Sexton would not be taking part in the game. His calf had flared up and he would have to watch from the sidelines.

Jack Crowley was in at 10 for his first Test start and Ross Byrne was on the replacements bench. Given that Joey Carbery and Ciarán Frawley were both injured, this was Ireland calling on their fourth and fifth choice men to navigate a Test match against a wounded but determined Australian side.

That's how late and unexpected the change was pic.twitter.com/aHcD3LMq5z

END_OF_DOCUMENT_TOKEN_TO_BE_REPLACED

As it all played out, Ireland were rattled by the late withdrawal of their captain, but Jack Crowley acquitted himself well and Ross Byrne came off the bench to kick the winning penalty.

Yes, Johnny Sexton is still a player that Ireland often struggle without but this result, and these two lads stepping up, will mean a lot to Andy Farrell and the wider group.

Following the game, Peter O'Mahony, who stepped in as captain, spoke extremely well of a player, in Crowley, that he has witnessed coming through the Munster, and now Ireland, ranks. He said:

"We were all conscious that we wanted to make him feel a million dollars. Sometimes that's just a little squeeze of the arm, or pat on the back. And he knows, then, that you're there.

"The most important thing is your actions as a group - from a forward pack or leadership group. They weren't always up to scratch, but we always had his best interests at heart.

"It's a big ask for a young man to come in and play 70 minutes against a team as good as that, and to come out on top. Look, it's easy to see - he's a good kid. He's hungry to learn, he's hugely ambitious, he's no fear of asking questions or saying the wrong thing. And it's refreshing to see, someone at that age getting stuck in, enjoying it and putting a performance like that in. It's great for him."

END_OF_DOCUMENT_TOKEN_TO_BE_REPLACED

O'Mahony and Crowley will now return back to Munster and the challenges are coming thick and fast - Connacht at home before Edinburgh away and European Cup tilts against Toulouse and Northampton.

Munster will get back several players that are dinged up, but ones that are full of confidence after a positive few weeks. 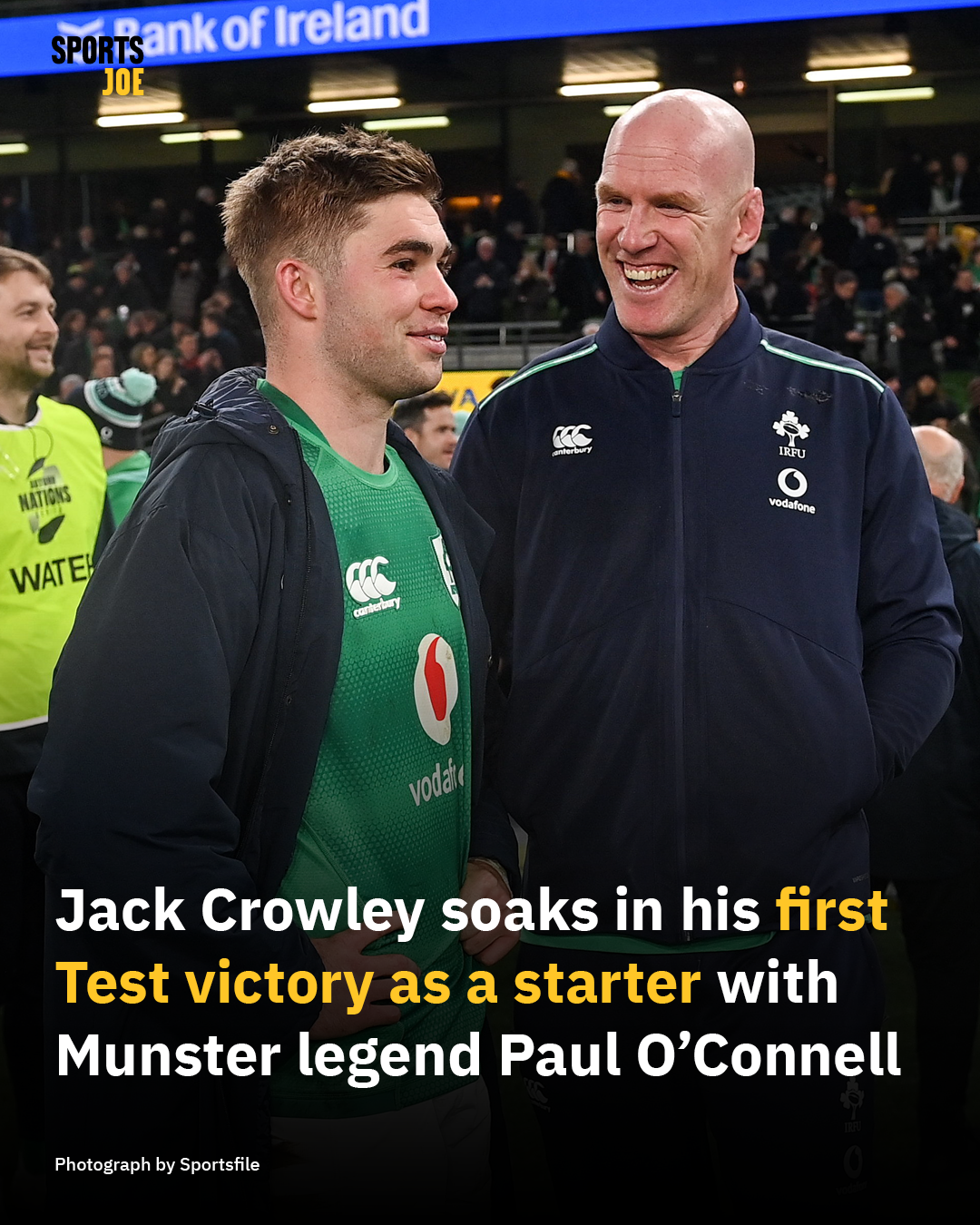 
popular
Talksport presenter puts Martin O'Neill to the pin of his collar over Declan Rice and Jack Grealish
Roy Keane scores winning goal past Micah Richards in ITV v BBC pundits match
Roy Keane reveals what he wrote about England during Senegal game
Rory McIlroy explains 'falling out' with Shane Lowry that lasted a few years
Gary Neville sticks up for Ronaldo as contextless pictures and videos taken as gospel
World Cup Power Rankings: The top 10 players at the tournament ahead of the quarter-finals
Cristiano Ronaldo's sister blasts Portugal boss' decision to start forward on the bench
You may also like
6 days ago
Shay Given on how far Ireland could've gone at the 2002 World Cup with Roy Keane in the team
1 week ago
From Ireland to Argentina: Alexis Mac Allister's Irish roots explained
1 week ago
Former England international admits he wishes he had played for Ireland
2 weeks ago
Two baffling omissions as four Ireland stars make World Rugby 'Dream Team' of the Year
2 weeks ago
Josh van der Flier claims World Rugby Player of the Year at Monaco ceremony
2 weeks ago
"Highlight of my Ireland career" - Behind the scenes as Jack Crowley and Ross Byrne covered for a legend
Next Page