Joe Schmidt will take a 26-man squad to the Windy city as Ireland return to Soldier Field where they sealed their maiden win over New Zealand in 2016 with Johnny Sexton, Peter O'Mahony, CJ Stander and Robbie Henshaw all staying behind in Ireland while the uncapped duo of Will Addison and Ross Byrne have both been selected for the trip.

With Sexton at home and Conor Murray still recovering from a neck injury, positions in the halves are wide open this weekend and Trimble backed his former teammates Cooney and Carbery to start against Italy at Soldier Field on the latest episode of Baz and Andrew's House of Rugby. 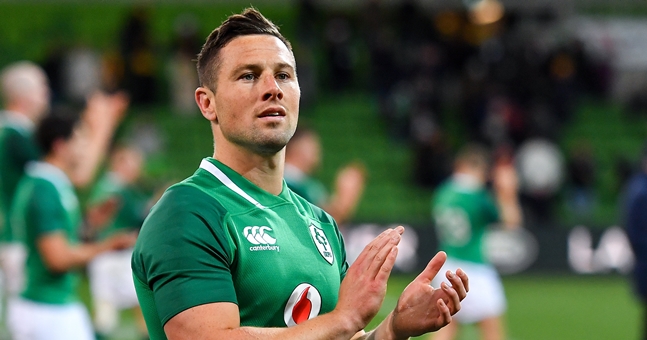 ANDREW: You’d imagine he’d go Carbery.
BARRY: You think so?
ANDREW: Yeah, I would have thought so. He’ll go Carbery and then, it’s a toss-up between Luke (McGrath) and (John) Cooney. I suppose, the only logical way to look at it is that Cooney was, kind of, in the driving seat in June – when he got picked for tour ahead of Luke – and, since then, he really hasn’t put a foot wrong. And he’s a kicking option as well, which isn’t make-or-break but, if it’s a 50/50, then it is going to go in his favour. So, for me, it’s probably Cooney and Carbery at 9 and 10. It’s pretty exciting set of half-backs.
BARRY: Isn’t it?
ANDREW: Yeah.
BARRY: Yeah, I think. The centre partnership I think, I reckon he’ll probably go with Aki and Ringrose, personally. I think Addison on the bench. I do love the way Addison is playing at the moment. Like, as a 13, that’s what you are looking for. For me, he’s got that intent to play. He controls that fourth and fifth phase. By the looks of things, for Ulster, he knows when to make those decisions – when to go out the back-door or when to make space, which is huge.

Listen to the full discussion from the 16:00 minute mark below

END_OF_DOCUMENT_TOKEN_TO_BE_REPLACED

Meanwhile Murray said last week that watching Cooney, Luke McGrath and Kieran Marmion has inspired him to try and regain his fitness and indeed his place back in the Irish national team.

"Those lads have been flying it for their provinces. Lukey, Marms and Coons. They’re going really well. That’s going to be the tough part of this November, watching those guys play well. They’re good players. That’s the way it is. That’s tough, but that’s professional sport and that motivates me to get back and play well and put myself in a position to play well and be selected again. But yeah, I can see it from your fan’s point of view, it will be interesting definitely."

Murray, if he hits all his markers, should be back for Munster's Champions Cup fixtures in December before the festive interpros.


popular
SportsJOE 2000s Football Quiz | Round 1
The SportsJOE 12 o'clock quiz | Day 69
QUIZ: Name these footballers based on their former teammates
QUIZ: Name the footballers to have played for Manchester United & Real Madrid
The SportsJOE 12 o'clock quiz | Day 67
"I went up to the hotel, got attacked in the room and told I'm no longer Tipperary captain"
"I knew I didn't have the pace or strength, it was just get it and try kick it left or right"

You may also like
5 days ago
Baz & Andrew's House of Rugby - Mike Brown on past battles with Ireland
1 week ago
"He walks into the dressing room and Pienaar goes, ‘We can’t win’!"
1 week ago
Baz & Andrew's House of Rugby - Finn Russell on life in Paris
2 weeks ago
Ben Youngs talks about Leicester Tigers' infamous Tuesday training sessions
2 weeks ago
Ryan Baird on his physical and mental preparations to hit rugby's return running
3 weeks ago
"He's a massive human being with an unbelievable skill level" - Jean De Villiers
Next Page