VIDEO: Mike Tyson has some biblical advice for Ronda Rousey

Mike Tyson knows what it is like to be Ronda Rousey right now.

The former heavyweight boxing champion of the world was just as stunned as the rest of the world, in 1991, when his reign was ended by James Buster Douglas.

The most recent example as a KO that created global shockwaves was Rousey's loss to Holly Holm at UFC 193. The challenger delivered a punishing head kick that floored Rousey and cost her the bantamweight belt. 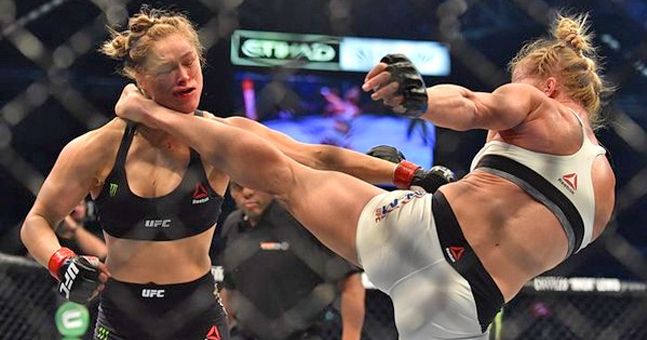 In an interview with Conan O'Brien, last night, Tyson was philosophical and biblical with his take on Rowdy.

Tyson said, "You have to understand, we're in the hurt business. We're in the business where you get hurt.

END_OF_DOCUMENT_TOKEN_TO_BE_REPLACED

"She has to be seen. She's pictured coming out of the house. That's okay. Show your face; you're human.

"She has to understand, she's a Goliath. David was a great king, he did great things - he built as civilisation, a CIVILISATION - but he's more famous for beating Goliath.

"He never came out of Goliath's shadow, like this young lady Miss Holm. She's never going to be out of Ronda's shadow."


popular
'Make him hurt, make him yours' - How the Springboks ruled the world
In 86 seconds, Patrick Bamford becomes English football's voice of reason
Springboks legend Tendai Mtawawira tells us what he really thinks of Ellis Genge
Jose Mourinho is the picture of happiness and health after Spurs sacking
'Beast' Mtawawira is a big fan of Mike Ross' Lions front row
"We did find him hours later and we made up." - How Flynn and his best friend came to blows in Croke Park
Jose Mourinho is about to step up and become the hero football needs
You may also like
2 weeks ago
Exciting UFC 264 card takes shape as McGregor signs up for trilogy
4 weeks ago
Dejan Lovren lasts entire minute in cage fight with UFC legend Mirko Cro Crop
4 weeks ago
From homelessness to the brink of securing a contract with the UFC
1 month ago
UFC announce lightweight title fight after Khabib officially retires
1 month ago
"I'm sorry" - New bantamweight champ in tears as UFC history is made
1 month ago
Conor McGregor bought out of Proper 12 whiskey company
Next Page