"I've never seen anything like it; he caught me way off guard" - Donald Cerrone on McGregor

A quick journey back to October 2018 and you'd remember the Dubliner drinking whiskey in his press conference just days before fighting an undefeated Khabib Nurmagomedov. And it wasn't like that whiskey - the proper whiskey - wasn't having any affect on his senses.

McGregor subsequently went into the Octagon and got the head beat off him, trying to reason with his opponent after round 2, saying 'it's just business'.

END_OF_DOCUMENT_TOKEN_TO_BE_REPLACED

On Saturday night in Vegas, he wasn't looking for mercy. He was unleashing hell and he was in a hurry about it too, taking just 40 seconds to dismantle Donald Cerrone and claiming his first victory since 2016 with a performance that shook the game and the jaw of Cowboy.

As McGregor charged aggressively forward, he guarded a take-down with a knee straight to the face of the American. 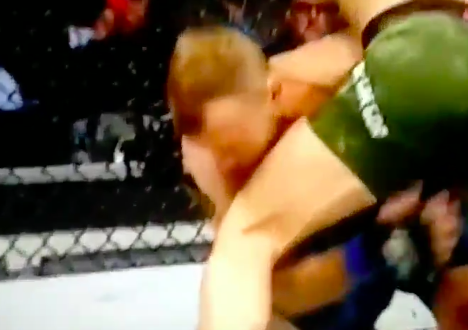 When Cerrone tried to slow it down and get to grips with him, bang, bang, bang, bang. Four times, The Notorious sparked him with a hard, sharp shoulder into the snout.

END_OF_DOCUMENT_TOKEN_TO_BE_REPLACED

The jaw, the nose, the eyes all caught in the space of 10 seconds and McGregor had the back broken on what would be his comeback fight, his first win since he held aloft two belts in New York after picking apart Eddie Alvarez.

And, when all was said and done, even the Cerrones appreciated the display.

In Cowboy's own words, he got his ass whipped early.

Typical class from a pioneer of the game who handed all the credit to McGregor for bringing something to the table that he hadn't ever encountered, even in his 50 pro fights.

"Oh man, he got me with his shoulder straight away, distorted the s**t out of me and then head kicked me," Cerrone said.

"I’ve never seen anything like it; he caught me way off guard. He busted my nose, it started bleeding, and then head kicked me.

"I was like 'oh man, this happened that fast?' I got my arse whipped early."

Donald Cerrone’s grandmother interrupted his interview to console him after the loss to Conor McGregor. #UFC246 pic.twitter.com/KT85ZPn29G