Ben Askren on getting the opportunity of a life-time... after he retired

It has been four months since Ben Askren last competed in Mixed Martial Arts. Askren is aged 35 and many would back him mounting a successful comeback after two losses in the space of four months [his only two defeats of a 22-fight career].

His body is telling him otherwise, though. His head and heart agree too. So do the medics.

Having carried, and fought through, a hip injury for longer than he would care to remember, Askren is due in for a hip replacement in August.

"My hip was really bad but I'm going to get that done. I do need a new hip; my left one.

"But I was already retired (before I signed for the UFC). I was like, 'Okay, I'm going to take this opportunity that's been given to me and see if I can do it. And if I can't do it, I'm going to move on'. That's as simple as it was. I have a lot of things I want to do with my life." 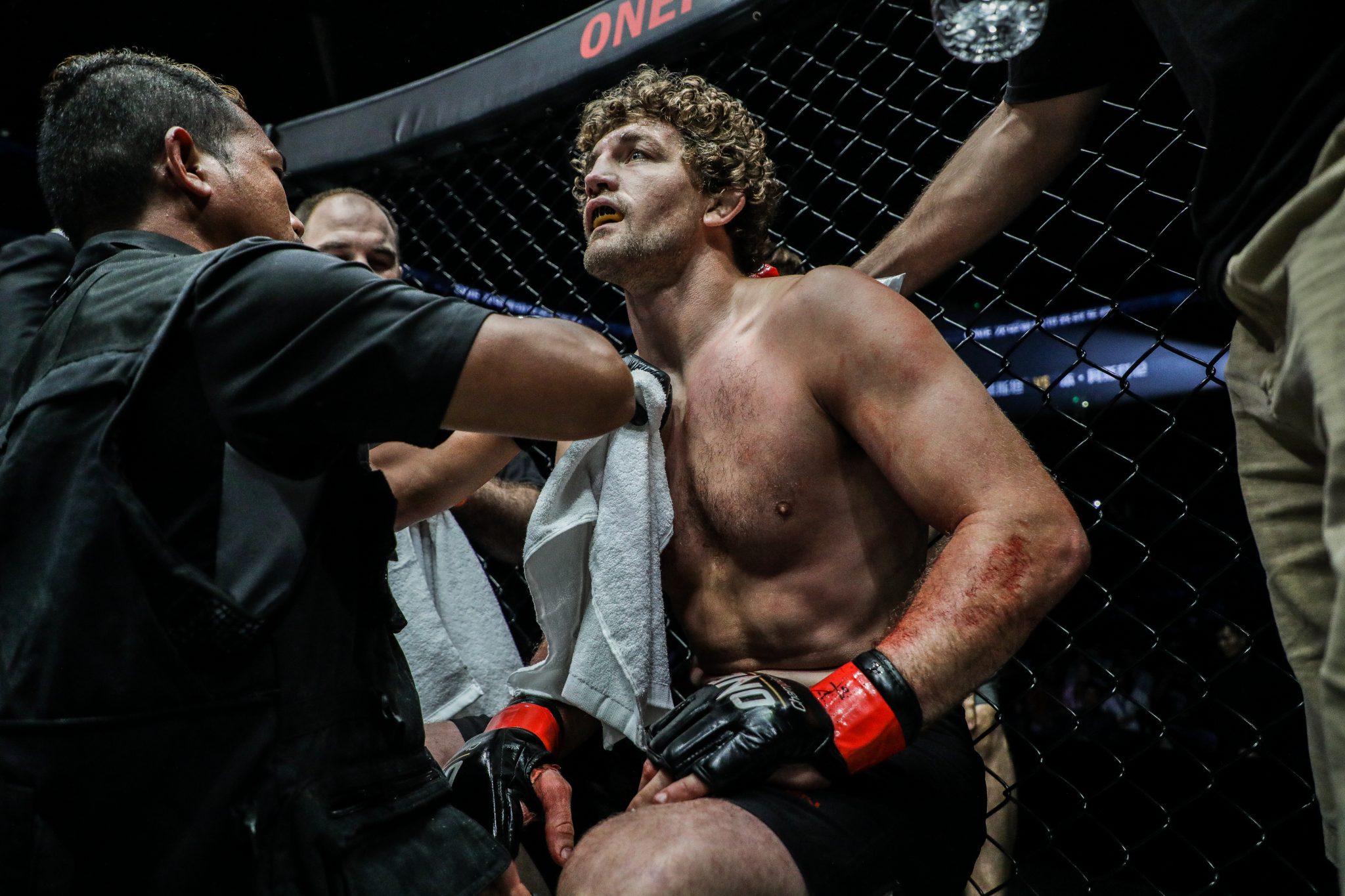 The former ONE and Bellator welterweight champion has enough going, at present, not to dwell on the past too much. Himself and his two brothers run three 'Askren Wrestling Academy' gyms and plans are well afoot to open five more. He co-hosts two podcasts (one wrestling, one MMA) and does some wrestling commentary for ESPN.

Later this month, he will leave all that behind for a few days to attend Fight Con Ireland at the Silver Springs Hotel in Cork. That event, which also features the likes of Frank Mir, Stephen 'Wonderboy' Thompson and James Gallagher, will be the second time Askren has been to Ireland.

"My wife, myself, my brother and my cousin did a little European trip and we saw about six countries. Our first stop was Dublin and it was fun. I've never been to Cork before so looking forward to it. Hopefully it draws in fans from all over Ireland."

Born in Iowa and raised in Wisconsin from the age of five, Askren started to garner some attention on the wrestling scene when he attended the University of Missouri.

"I played a lot of sports when I was a kid and wrestling was the one that I just enjoyed the most. As I got older, I quit all the other sports and spent most of my time doing wrestling.

"I loved the combativeness of it. I loved that I could control my own destiny as I was the only guy on the field of play. Really, though, I just love, love, love to compete."

END_OF_DOCUMENT_TOKEN_TO_BE_REPLACED

Wrestling is a big deal at elementary and high school level and the stakes, and crowds, are even higher once you get to college. State finals can attract crowds of over 15,000 and top wrestlers are feted. In terms of a profession, though, there are few long-term paths to take.

"You can train for a few years, post-collegially, and train for the Olympics but that's not going to last you too long. An old guy in wrestling is 30 years old. You could go into coaching as a lot of collegiate programmes would need coaches, and a lot of people are doing what I'm now doing and setting up their own coaching academies."

At one stage of his life, Askren was hoping to transition from NCAA champion to a college-level coach. His life veered another way and it was mainly due to his talent on the mat. He had the opportunity to represent America at the 2008 Olympics and bounced back from not medalling there to become a grappling world champion a year later. 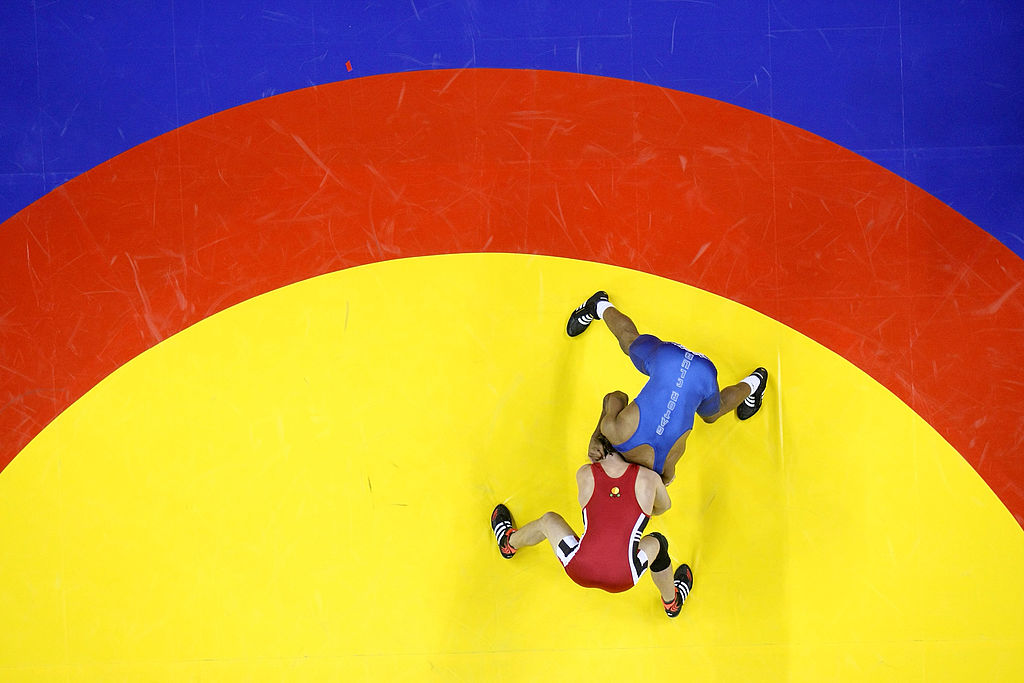 By the time he won that grappling title, Askren had already made his MMA debut. His first two bouts, in February and April of 2009, were at events called 'The Patriot Act'.

"I was the promoter," he explains. "I wanted to get fighting and I couldn't find anyone to fight, because everyone would say, 'Well, your opponent wants $5,000 and we can't pay him that so we can't put you on the card. So, after a while, I was like, 'Well f*** this, I'll just put on my own card'.

"It was a pretty small venue, around 700 people, but we pretty much sold out for both fights. tyron Woodley actually made his debut on The Patriot Act - his pro debut - and I didn't find this out until about 10 years later but Neil Magny also fought on one of the cards.

"So I was able to put on my own fight for two cards and I was finally able to get a third one ('Ballroom Brawl' in August 2009) and then Bellator came calling."

END_OF_DOCUMENT_TOKEN_TO_BE_REPLACED

That Bellator 'call' was actually a text but it was enough to get the up-and-coming star to pack his bags for a welterweight tournament that would tee him up for an October 2010 title shot. "I beat Lyman Good for the Bellator championship," he says, "and he's still fighting. I beat Jay Hieron, who was a UFC veteran, and then fought (and beat) Douglas Lima and Andrey Koreshkov who, between them, went on to hold the belt for quite a while, until Rory MacDonald arrived."

The champion's Bellator contract ran down in 2013 and there was supposed to be a switch to the UFC but 'negotiations did not work out with Dana White'. Asia's 'ONE Championship' swooped in and offered Askren a well-paid alternative. It only took him one fight to line up a crack at their welterweight title and 84 seconds to claim the belt once he got to the decider. 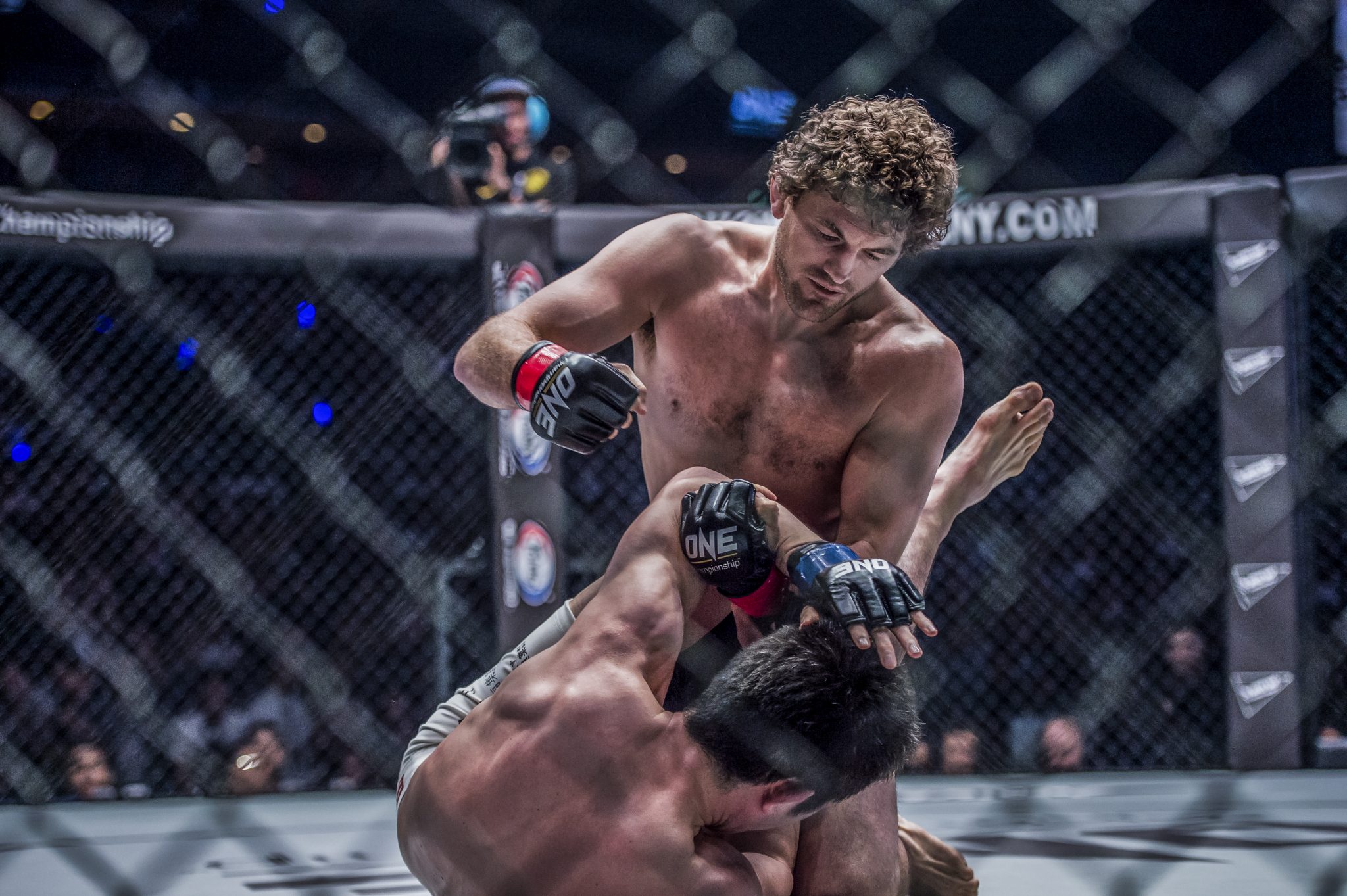 He held that belt up until November 2017 when, after a fourth title defence, he vacated the strap and retired from MMA. At the time, he declared he would only return to the fight game if there was an 'opportunity to prove I was the best in the world'. There was talk of a fight against UFC legend Georges St-Pierre but, instead, a unique trade deal saw him put that legacy on the line in the Ultimate Fighting Championship.

"I managed to get traded in November 2018," he says, "which has never happened before and has not happened since." That trade was for legendary flyweight Demetrious Johnson and Askren hoped a couple of victories would put him in line for a shot at UFC gold.

At the age of 34, Askren made his long-awaited UFC debut and submitted former champion Robbie Lawler in the first round. 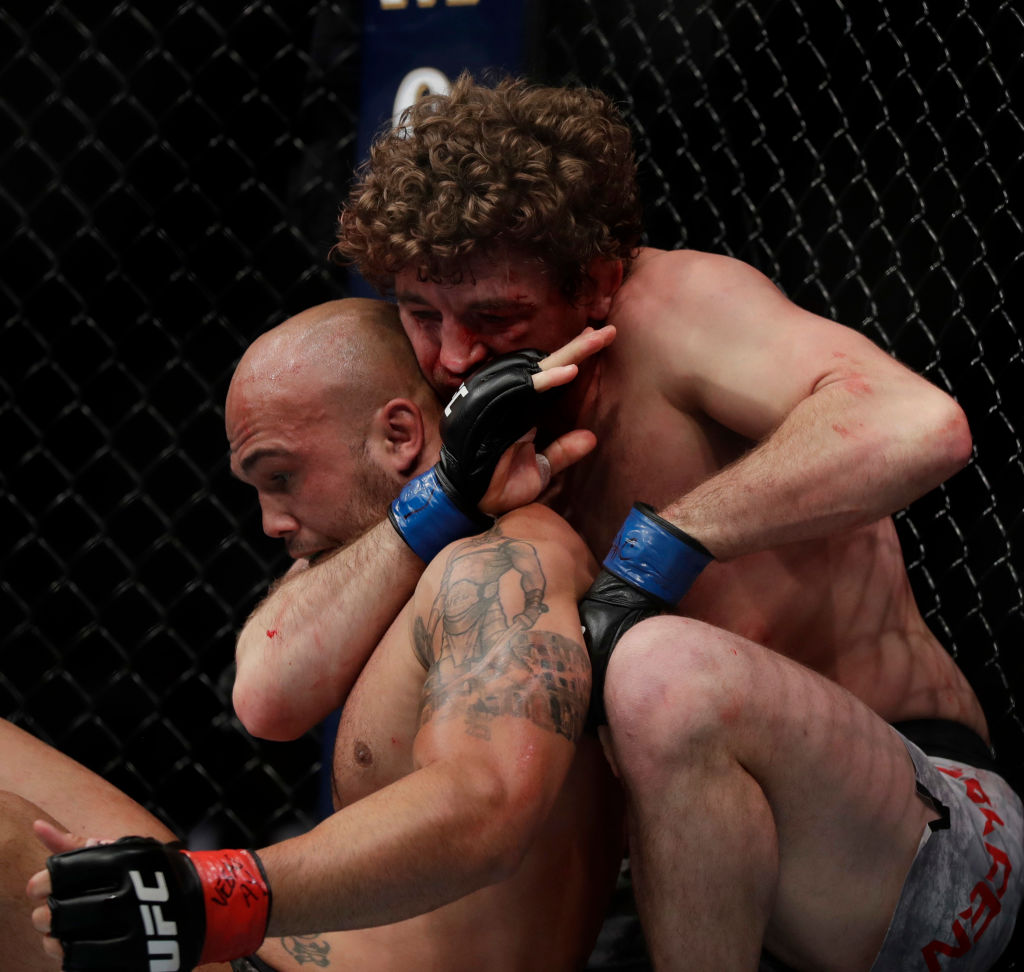 Ben Askren gets Robbie Lawler in a choke-hold during UFC 235 at T-Mobile Arena on March 02, 2019 in Las Vegas. (Photo by Isaac Brekken/Getty Images)

He was looking good for a tilt at 170lbs champion Kamaru Usman until Jorge Masvidal handed him his first ever MMA defeat after just five seconds of their UFC 239 clash.

The manner of the loss - the quickest knock-out ever in UFC history - would have seen many withdraw from the fray for a while but Askren signed up for a 'Fight Night' headliner in Singapore with former title contender Demian Maia. It was a grapple-fest that one 'Fight of the Night' honours but Maia had his hand raised at the end and Askren, in the space of four months, had gone from 19-1-0 to 19-1-2.

"It's well established what happened in my UFC run. It didn't turn out as I wanted it to turn out, but I was glad I got the opportunity to go test myself."

Askren is insistent that his fighting career is over. He faces a year or rehab and recovery after his August hip operation and says, after a decade of MMA fighting and another decade of pure wrestling, that 'I want to use my brain now'.

Podcasts, commentary, expo appearances and an ever-expanding empire of wrestling academies with his brothers. There is one more project that Askren is excited about - disc (frisbee) golf.

"I'm building a disc golf course on my property so that I can get to play it more often. With my businesses and my kids, I don't get to play it as much as I used to."

In case you thought that was just a hobby, Askren was once the 9th ranked amateur in the disc golf world rankings. No matter what he does, he loves, loves, loves to compete.

*Ben Askren will be appearing with the likes of Stephen Thompson, Frank Mir, James Gallagher, Kiefer Crosbie, Gary 'Spike' O'Sullivan and more at Fight Con in County Cork on February 29.


popular
Referee Mathieu Raynal puts Sexton in his place after TMO mess
Sexton compares "brilliant" Irish debutant Craig Casey to Jonny Wilkinson
Three Irish forwards stand tall in player ratings after Italy thrashing
"I was like, ‘My ear is hanging off my head. Can you not see that?!'"
Owen Farrell rages at referee Pascal Gauzere as Wales catch England sleeping
QUIZ: How well do you know Manchester United players of the 2010s?
The SportsJOE 12 o'clock quiz | Day 308
You may also like
1 month ago
Daniel Cormier defends immediate reaction to shock Conor McGregor loss
1 month ago
McGregor admits shout from Dustin Poirier's corner got inside his head
1 month ago
Khabib Nurmagomedov perfectly predicted how Poirier would defeat McGregor
1 month ago
Jolie Poirier certainly let her voice be heard after her husband's win over McGregor
1 month ago
Khabib Nurmagomedov reacts to Conor McGregor's shock UFC 257 loss
2 months ago
Nate Diaz says Jake Paul needs his 'ass beat for free' after calling out McGregor
Next Page