To make a dream season even better, Henry De Bromhead and Rachael Blackmore have teamed up to win the Aintree Grand National with Minella Times.

In Cheltenham, the pair were unstoppable and in Aintree, they've won the biggest jumps race of all. Everything they touch, these days, ends up in the winners enclosure and this time it was the JP McManus owned Minella Times who sealed yet another piece of history for this dynamic duo.

The 11/1 shot had a dream run around the inside and as he turned for home in front, it was clear that the biggest danger was his stablemate Balko Des Flos. Blackmore cajoled her horse up the long-run in and he had enough in the tank to lengthen clear for the Tipperary jockey, who became the first ever female rider to win the race.

For De Bromhead, it's been a seismic season and this 1-2 finish underlines his credentials as one of the best trainers in the business. A business now dominated by the Irish, the first five horses home saddled by Irish trainers.

Afterwards, Blackmore paid tribute to the Waterford man, as she came to terms with what she had just achieved. 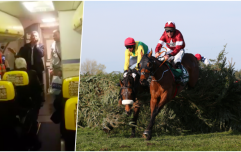 END_OF_DOCUMENT_TOKEN_TO_BE_REPLACED

"What Henry De Bromhead does with these horses, I don't know, I'm so lucky to be riding them. I can't believe I've just won the Grand National.

"I don't feel male or female right now. I don't even feel human. This is unbelievable."

It will have been an emotional triumph for owner JP McManus, whose daughter-in-law passed away in Barbados last Christmas. Indeed, as AP McCoy reflected on the the win, he was overcome with emotion for his old boss.

Ruby Walsh, too, choked back the tears as the scale of Blackmore's triumph and what it will mean for horse-racing hit home.

"Racing is leading in that regard. It is incredible that jockeys like Rachael can go out every day of the week and get the same pay as any of the men" the Kildare analyst said on Virgin Media Sport, having roared Minella Times home.

"What an ambassador for racing. She's an incredible incredible person."