With Gowran Park wrapped in thick fog (see picture below from an earlier race for some idea of the conditions) it was hard for all, spectators and commentators alike, to see exactly what went on in the big race of the day but out of the gloom at the finish came Djakadam, justifying the fact he was well fancied in the betting ring, going off at 9/2. 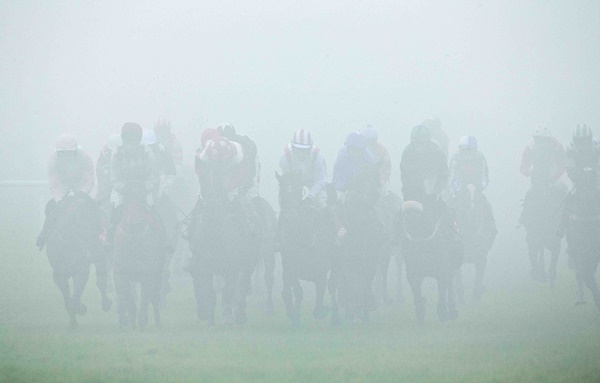 In the early running Davy Russell kept Sadler'sflaure at the head of affairs and away from trouble. Horses like Ipsos Du Berlais and Oscars Business parted ways with their jockeys during the early going but due to the thick fog, nobody could tell you how.

As the field approached the final three fences, it appeared that Ruby Walsh's mount Djakadam was perfectly poised to strike looming up on the shoulder of The Job Is Right, who had somehow taken the lead. Willie Mullins' horse just eased past the leader before the last, over which The Job Is Right fell.

In the end, Djakadam won by eight lengths from My Murphy, with Goonyella third and the disappointing 3/1 favourite Gallant Oscar fourth.

Only six of the seventeen horse field finished but what exactly happened  to them over the 3m1f race is a mystery at this stage.

popular
Alex Ferguson's dismissive comments confirm truth about Jordan Henderson
The SportsJOE 12 o'clock quiz | Day 286
Wayne Rooney story about Memphis Depay shows why he failed at Manchester United
"There were some tough battles but I was happy to test myself against the best"
QUIZ: Name the clubs to have lost in every Champions League final
QUIZ: Can you name the Scottish football cult heroes?
"The divil you know is better than the divil you don't" - Larkin stands by Cody
You may also like
6 years ago
Ladbrokes' Hayley O'Connor guides you through the weekend's big races
1 year ago
"The ramifications will be felt as soon as the morning" - O'Leary will be missed
1 year ago
The nine most memorable moments in Ruby Walsh's champion career
1 year ago
Like always, Ted Walsh put it best
1 year ago
Farewell to one of the greatest ever, Ruby Walsh
1 year ago
"I'm there since I was 16 when he offered me a job...there isn't a loyaler man in training"
Next Page