Ladbrokes' Hayley O'Connor guides you through the weekend's big races

“Pace yourself” are two words I generally don’t welcome, but I think could be a prudent approach to racing this weekend.

One symptom of enthusiasm can be tunnel vision and I'm cautious that I may not be too objective as we welcome back some National Hunt heroes over the next two days.

My plan is two-fold; as well as some winning wagering, my Cheltenham form analysis will get under way as we’ll have our first introduction of the season to possible Champion Hurdle contenders on Sunday with the Morgiana Hurdle at Punchestown and Greatwood Hurdle at Cheltenham. 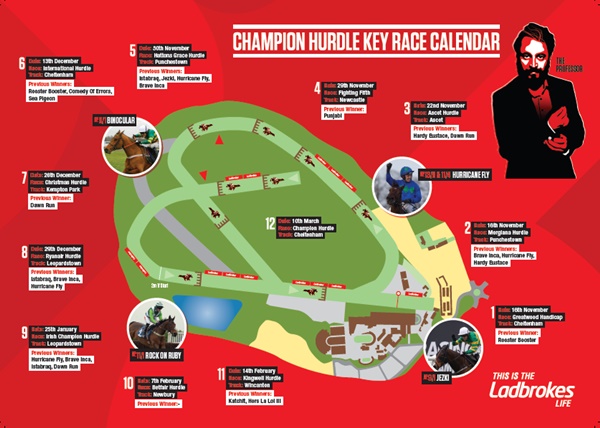 Across the water, Vaniteaux will surely find himself in the antepost mix if he justifies his market-leading position in the Greatwood, and in doing could also justify Barry Geraghty’s tough decision of not partnering with record breaking Jezki back here.

With McCoy sidelined, he was touted as the next option for the current champion hurdler Jezki, but his loyalty to Nicky Henderson, and perhaps regard for his exciting five-year old, last seen when an admirable third in the Supreme Novices, means he’ll be on Vaniteaux at Prestbury Park.

Among those taking him on is Clondaw Warrior who won the November Handicap, which very “Irishly” is run in October, on his last start and is undoubtedly an intriguing player. Barry has been spot on with his choice of rides of late however, and I think his decision will be rewarded.

I am much less decided about the Morgiana. Jezki was utterly brilliant in the Champion Hurdle at the festival last season, (readers of my JOE.ie blog will remember I tipped him up, 9/1 BOOM) and is the one to beat on form for Sunday… BUT… “The Fly” is almost unopposable at Punchestown. END_OF_DOCUMENT_TOKEN_TO_BE_REPLACED

Whatever the debate about him not delivering his best at Cheltenham, this is his stomping ground. Prior to Jezki beating him here last April, you’d have to go back to 2009 to find his last defeat at the Kildare track. Since then, he picked up six of his Grade One prizes here, and will be bidding for his third successive victory in this race. At 10 years old though, he’s getting on.

Jezki, on the other hand has beaten Hurricane Fly on his last two starts, despite chasing him home twice on the festival lead in. This is the start of his road to Cheltenham so defending his crown is surely the ultimate target.

The game mare Little King Robin has continued to rise to the challenge of tougher races and steps up again in her bid for sixth consecutive win, and we know folks - never underestimate the fairer sex! As Elenor Roosevelt wisely said “A woman is like a tea bag; you never know how strong it is until it's in hot water” and the opposition would be silly to let her nab too much of an advantage in front.

I can’t honestly say whether it is my head or my heart, but my instinct tells me Hurricane Fly will use whatever is left in his tank to dominate here as the chances of him doing so at Cheltenham are less so. While Jezki could be on the rise, the Hurricane’s opportunities to blow us away again will be diminishing with age, and I think he could use those mighty lungs to do so on Sunday.

Regardless of my instincts being right or wrong, like the weather warnings this week, I am going to approach with caution. It’s a long season ahead, and with that and the dreaded “pace yourself” in mind, I’ll be more interested in note taking that staking this weekend.

popular
The SportsJOE 12 o'clock quiz | Day 286
Alex Ferguson's dismissive comments confirm truth about Jordan Henderson
Wayne Rooney story about Memphis Depay shows why he failed at Manchester United
QUIZ: You have 30 seconds to answer this one tricky football question
QUIZ: Can you name the Scottish football cult heroes?
"There were some tough battles but I was happy to test myself against the best"
QUIZ: Name the clubs to have lost in every Champions League final
You may also like
2 months ago
10 horses to follow for the 2020/21 national hunt season
11 months ago
Tips to get on for The Dublin Racing Festival
11 months ago
Ante-post Cheltenham chances to get stuck into before it's too late
1 year ago
Wexford jockey Jamie Codd pays emotional tribute to his brother after winning Champion Bumper
1 year ago
Paddy Power unveil massive 25ft statue on eve of Cheltenham
1 year ago
Nine of the best Ante-Post bets with Cheltenham only eight weeks away
Next Page