4 runners, 3 winners and one eye-catcher.

Not a bad day at the office.

Willie Mullins didn't have a brilliant Christmas. By Willie Mullins standards. It still wasn't as bad as many thought, as despite numerous setbacks, through unlucky fallers and some off colour horses, he still managed nine winners over the festive period.

And there were critics. Those who said the stable had a disaster, a nightmare festival.

Shows the calibre of the manhttps://t.co/XJGKbuqfNS

Only Gordon Elliot had more.

If you want to call that off form, you may, but there's no doubt about it that the Clonsutton stable is bang back in form only one week into the new year.

On New Year's Eve, Mullins produced a master training performance as the supremely talented Killultagh Vic stormed to victory in Punchestown, in his first race in 714 days.

On New Year's Day, the stable completed a double in Tramore, when the impressive Bachasson won the big chase of the day, while stablemate Deal D'estraval won the Maiden Hurdle for the yard. 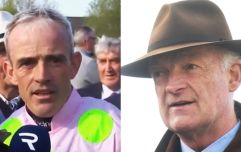 END_OF_DOCUMENT_TOKEN_TO_BE_REPLACED

Fast forward to this Sunday, another big day of Irish racing, and the master handler was on fire, with a 100% strike-rate in the three races his horses entered in Naas.

Next Destination was the big one of the day. The Malcolm Denmark-owned six-year-old didn't disappoint, making it three wins out of three over hurdles this term in the Lawlor's of Naas Grade One Novice hurdle.

An impressive display and certainly one to watch for Cheltenham https://t.co/UB4W2EItTl

The teak tough hurdler will most likely head to the Dublin Racing Festival in Leopardstown in February, and after that all roads will lead to the Ballymore Novices' Hurdle in Cheltenham.

"It's tough out there and I'd say his ability got him home. Next Destination jumped electric and was tough when I needed him - he's improving," said jockey Paul Townend to At The Races in the aftermath.

Duck des Genievres was a gallant third behind Next Destination, and he is definitely one to watch next time out. Today was the French bred horse's first run in 246 days so he will come on a good bit for the race. 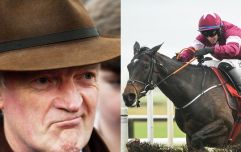 END_OF_DOCUMENT_TOKEN_TO_BE_REPLACED

This impressive stable performance was only continuing the trend of the day. The exciting JP McManus owned five-year-old Demi Sang had set the tone for the day in the 1.15 Novice Chase.

The French import didn't have a perfect jumping round on the Kildare track, and lost his momentum on a couple of occasions, but the manner of his recovery, and his gritty rally in the closing stages to take victory will have impressed his trainer.

This is a horse who has won two chases and two hurdle races in his career in France, and now Mullins is angling towards an Arkle run at the Dublin Racing Festival.

"Very pleased. We noticed him in France. They kept him busy over there, he has a lot of runs for a five-year-old. He's a nice acquisition to the yard.

Next Destination - will he run again before Cheltenham and what's his likely Festival target? @WillieMullins speaks to Gary and talks Grade 1 aspirations for new recruit Demi Sang: pic.twitter.com/NuMkecnUSX

Asthuria was Mullins' fourth and final runner of the day, and the 7-year-old duly obliged to take the spoils in the Mares Beginners Chase.


popular
Justin Gaethje tells Conor McGregor to wait his turn
The SportsJOE 12 o'clock quiz | Day 73
QUIZ: Can you name the Football Italia cult heroes? | Part 2
The SportsJOE 12 o'clock quiz | Day 72
Only a true nerd will get full marks in our 2016 football quiz
SportsJOE 2000s Football Quiz | Round 3
QUIZ: The toughest football legends quiz you'll take today
You may also like
1 year ago
Ruby Walsh pays tribute to his first ever Grade 1 winner Alexander Banquet after horses death
1 year ago
Willie Mullins plotting a run at the Champion Hurdle with 'special' mare Laurina
1 year ago
Willie Mullins to send strong team to Melbourne Cup in search of glory
1 year ago
Galway Races: Day 6 runners and riders
1 year ago
Galway Races: Day 2 runners and riders
2 years ago
Irish absolutely dominate the Grand National
Next Page