Now you see me, now you don't.

Champ, from the foot of Cleeve hill is making a march. Minella Indo and Allaho have plenty in hand but Barry Graghty is bucking like a mad thing. Screw it, he's not even in picture anymore.

Champ takes off like he's only joined in. Champ, lives up to his name and having needed every single inch of the 3 mile and 80 yard RSA Chase trip, he's stolen a march and he's scuttled to the front just in time to meet the finishing post before the rest of them.

Minella Indo and Allaho tied up but even at that, Champ's finishing speed was improbable and incredible, Barry Geraghty's spirit unquenching, their horse had traded at 719/1 in running on the exchanges.

Now you see me, now you don't#Champpic.twitter.com/Zbzs1r9LMd

That final fence jump, was key according to Meath man Geraghty. 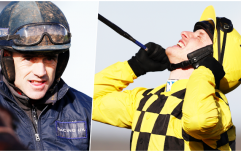 END_OF_DOCUMENT_TOKEN_TO_BE_REPLACED

Having landed the Champion Hurdle on Tuesday, JP McManus is having one cracker of a time at the Cheltenham festival and he'll be eyeing more glory later on, when odds-on shot Defi Du Seuil goes off as piping hot favourite in the depleted Queen Mother Champion Chase.

Champ's come from behind victory wasn't the only drama early on this Wednesday with the unbeaten Envoi Allen showing all his guts and class to land the Ballymore Novice's hurdle.

Favourite backers will have been worried turning in at the top of the hill when Elliott's horse was wide and under pressure, but Davy Russell had more in the tank and his mount stormed up the famous hill.

"Last year I rode no winner, went home, tail between my legs... "These are so hard to come by, I know."

He'll cherish this one, so too will trainer Elliott.

"Last year I rode no winner, went home, tail between my legs...

"These are so hard to come by, I know"

Davy Russell always says it as it is 👑pic.twitter.com/mR954OlqxQ


popular
Conor McGregor bought out of Proper 12 whiskey company
"No one comes into racing for money – it is a hard way to make a living" - Elliott releases heartfelt statement
Longford leaving cert schools Europe's finest with measured masterclass
QUIZ: How well do you remember the 2010 World Cup?
Ugo Monye's Lions XV features two Ireland players and Welsh captain
"There's 30 pints of Guinness on the table! The night before a World Cup quarter final"
QUIZ: You have 90 seconds to answer this tricky football question