"Obviously it's not the week he was hoping for."

Given how stacked with world-class talent Team USA's Ryder Cup selection is, the Europeans were hoping Rory McIlroy could find his 'A' game, or something close.

At Whistling Straits, it has been tough going for the four-time Major winner. McIlroy has struggled to get going and has faced off against some fearsome American teams. He is 0-3 from his three outings, with none of them being close.

END_OF_DOCUMENT_TOKEN_TO_BE_REPLACED

Such were McIlroy's struggles on the Friday that Europe's team captain, Padraig Harrington sat him out of the morning foursomes. That may have always been the plan - Harrington has insisted he never wanted to play his top guns in all five matches - but seeing not seeing McIlroy on that foursomes list only buoyed the Americans further.

On Saturday afternoon, he was paired with Ian Poulter for the four-balls against the red-hot American duo of Dustin Johnson and Colin Morikawa. For the second time in 24 hours, it was an American beatdown.

Europe are 11-5 down heading into the Sunday singles matches and need to win nine points to retain the trophy they won, in Paris, in 2018. Harrington has put McIlroy out first, against Xander Schauffele, while Shane Lowry, who won a point for Europe on Saturday, takes on Patrick Cantlay.

On the popular golf podcast No Laying Up, 'Tron' Carter tore into McIlroy for his performances, and demeanour, at Whistling Straits. He commented:

"From a technical perspective, his wedges suck. They're terrible. I'm so over him. He needs to take a year off - a gap year, a sabbatical - whatever. Gavin Moynihan was on Twitter, earlier, say he couldn't believe all the stick Rory was taking. No. Heavy is the head that wears the crown.

"Rory has made $500 or $600 million dollars playing golf, at this point... and it's like, 'Hey man, you know what? This is part of the territory and this is what comes with it. You're right in your prime and you're acting like a little bitch!'."

Carter has professed to be a fan of McIlroy in the past, but has lost faith over recent years as the Holywood native struggled in majors and has been inconsistent in other big tournaments. 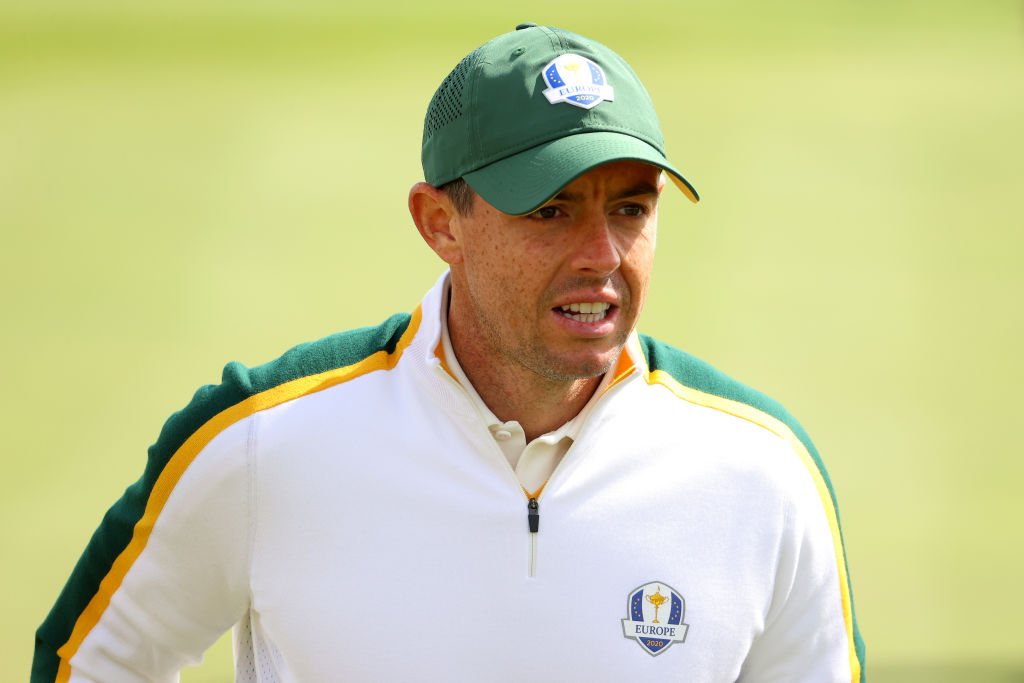 From the Team Europe side, Sergio Garcia [3 wins from 3 matches] was much more considerate to McIlroy.

Asked what he was saying to pick up McIlroy's spirits ahead of the final day, the Spaniard revealed:

"I told him the absolute truth. I told him that not only me but the whole team is proud of him no matter if he goes 5-0 or 0-5; that we love him and that we are always proud of the effort that he makes and the heart that he puts into his golf and into the team. It's as simple as that.

"Obviously it's not the week he was hoping for, without a doubt, not the week we were hoping for, for all of us, at least till now or until now. But we are still very proud of every single one of our teammates."

McIlroy will not have it easy against Schauffele in the singles. Even if he does pull out a victory, Europe will need everything to go their way, and several players to step up, if they even stand a chance of pushing Team USA close.


popular
World Cup 2022 Day 10: All the major action and talking points
Iran demand action by FIFA after USA team change flag on social media
Thibaut Courtois warns teammates after leaks emerge from Belgium camp
"I can absolutely say that I have never enjoyed a job more" - McKaigue revelling in new role as Slaughtneil GPO
Roy Keane's issue with Argentina star could rival Graeme Souness and Paul Pogba
"I have equal love for football and hurling" - Sheehy set for two Leinster finals in two hours
World Cup 2022 Day Nine: All the major action and talking points
You may also like
2 months ago
"You've won enough!" - Shane Lowry and Rory McIlroy embrace after Wentworth nerve-shredder
2 months ago
Shane Lowry beats Rory McIlroy to PGA Championship after thrilling finish at Wentworth
2 months ago
Cameron Smith one of six golfers announced as latest LIV Golf stars
3 months ago
'Seeing 18 LIV Golf defectors at Wentworth will be hard for me to stomach' - Rory McIlroy
3 months ago
Rory McIlroy made a class gesture to Scottie Scheffler's family after Tour Championship victory
3 months ago
Rory McIlroy clinches $18m Tour Championship after wild finish at East Lake
Next Page