Before Hazeltine, the USA had not won the Ryder Cup for eight years.

The Ryder Cup tees off on Friday morning at Le Golf National, in Paris, and the Americans are odds-on to defend the title they so emphatically won at Hazeltine in 2016. Rory McIlroy is determined to keep the trophy on European soil.

Team USA is stacked with Major winners and legends and have been boosted further by Tiger Woods' victory at the PGA Tour Championship at the weekend. Europe, meanwhile, are depending on some of their established stars - Henrik Stenson, Sergio Garcia and Ian Poulter, to name three - to rediscover their form of old and deliver some points.

John Rahm, Tommy Fleetwood and Rory McIlroy have all had decent seasons, although the Northern Irishman has often been haunted by carding one poor round out of four. That proved the case, again, on Sunday when he carded a 74 to go from joint second to finish six shots back in a tie for seventh.

The Ryder Cup has, in the past, helped many a golfer forget their personal woes and deliver big for their team. That is what McIlroy will be aiming for when he goes out in the foursomes and fourballs on Friday and Saturday.

The Holywood native is definitely carrying off the top golfer swagger in Paris and talking Team Europe up. The first answer of his Wednesday press briefing was a timely reminder to the Americans of who won eight of the last 11 competitions. McIlroy said:

"Yeah, I've been excited for this for basically since the last day in Hazeltine whenever we weren't the ones spraying champagne for a change.

"I've been excited for it. I really love being a part of the process. The dialogue I've had with Thomas over the past few months has been great, and seeing the team take shape and everyone that's played their way on, it's exciting.

"It doesn't seem that it's been that long or this is going to be my fifth Ryder Cup, but they have all been wonderful experiences for different reasons, and I'm sure this time will be no different."

'We weren't the ones spraying the champagne for a change'. McIlroy had previously won all three Ryder Cups he appeared in so the loss in Minnesota came as a jolt. 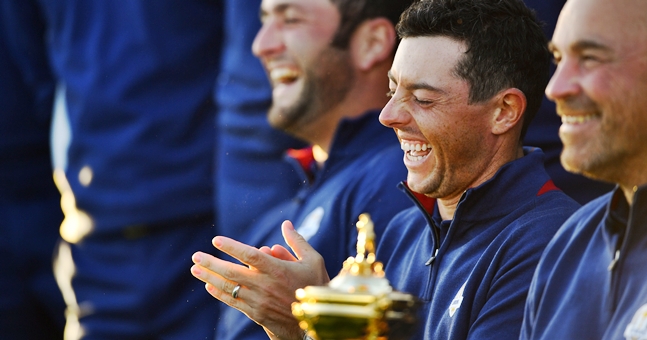 END_OF_DOCUMENT_TOKEN_TO_BE_REPLACED

One thing going in the favour of the Europeans is the fact that the USA have not won away from home since they won 15-13 at The Belfry in 1993.

"Yeah," reflected McIlroy, "I mean, it is surprising, 25 years is a pretty long time. I guess that's 12 Ryder Cups.

"It is, it's tough. I think playing on the road is increasingly becoming more difficult with how partisan the crowds are and how the crowds get behind their teams, and that's all a part of it. It's the same thing in any other sport. You have road games that are very difficult."


popular
Jacob Stockdale and Johnny Sexton not spared by English press
Baz & Andrew's House Of Rugby - Twickenham carnage
ROG hits the nail on the head assessing Ireland's performance
'Were they up for it more than us? That's my responsibility' - Andy Farrell
Triple Crown wrenched away as England scrape Ireland off their boots
Tyson Fury reveals what happened when he sparred Anthony Joshua
The Ireland XV that should definitely start against Italy
You may also like
4 months ago
"We're good friends" - McIlroy plays down Koepka row
4 months ago
Brian O'Driscoll mistaken for Mike Tindall after draining monster birdie putt
4 months ago
Brooks Koepka walks all over Rory McIlroy's record with brutal comments
5 months ago
Rory McIlroy leaves Brooks Koepka in his dust to win $15m FedEx Cup
6 months ago
Brooks Koepka brushes Rory McIlroy aside in WGC showdown and bags $3.75m
7 months ago
Major Olympics boost for Shane Lowry as he enters Top 10
Next Page