It was good to be back to these levels of joyous hysteria.

Tiger Woods went away, came back, went away again and is now back in the winners' enclosure. A five-year wait for a tournament victory was ended as the 42-year-old won the PGA Tour Championship by two strokes.

Woods began his day with a birdie and saw closest challengers Rory McIlroy and Justin Rose wilt on the final day. It was left to Billy Horschel to push him all the way until the 18th, but Woods won with two shots to spare.

As soon as he stuck his approach to the 18th hole on the green, he knew this would be his day. The huge crowds following both himself and playing partner McIlroy knew it too. 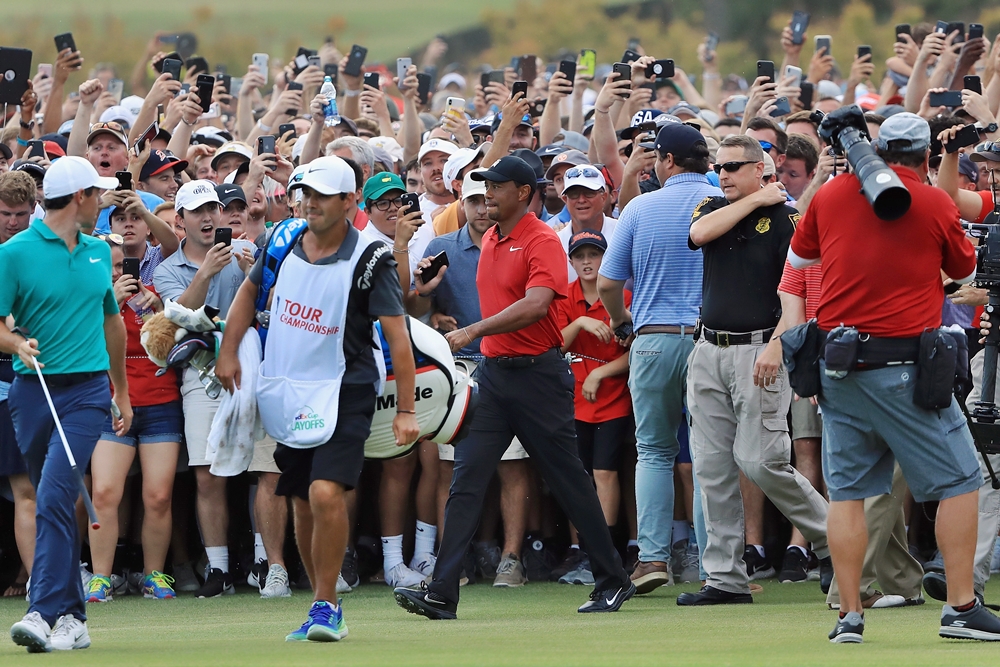 The video (below) shows the sheer magnitude of the crowds eagerly following Woods' every move.

McIlroy, who had dropped back significantly after giving back four shots on the front nine, walked towards the green with Woods for a while and the pair were caught on camera sharing a few words.

Following his victory, Woods was asked what the Northern Irishman had said to him heading up the last.

"And what Rory was saying, you know, Rory was just - off the tee, he was great, and then coming down (18) - between our second and third shots, he said, 'This is like Jack in '80 at Baltusrol'.

"I said, yeah, I just didn't have the tight pants and the hair. But it was all good."

END_OF_DOCUMENT_TOKEN_TO_BE_REPLACED

McIlroy was referring to the epic scenes at Baltusrol in 1980, when Jack Nicklaus - followed by huge crowds - won the US Open after going winless for the previous two years.

Woods insisted his celebrations - he simply raised his arms in victory and hugged his caddy - were not subdued in deference to the disappointed McIlroy.

Woods, he said, would be flying out to Paris overnight with McIlroy. Both men will be competing against each other at The Ryder Cup this weekend.

"Flying tonight with the guys, it's going to be fun," he said. "We're going to... I think we're all going to sleep well."


popular
Roy Keane's first impression of Cristiano Ronaldo proved to be very accurate
The SportsJOE 12 o'clock quiz | Day 290
The 14 Irish players Down Under as TG4 come up with the goods once again
Lady Gaga will perform Satanic ritual during Super Bowl halftime show, according to conspiracy theorist
"I kind of decided on Hill 16, 'you're either going to do this or you're not going to do this.'"
The SportsJOE 12 o'clock quiz | Day 289
Joe Rogan reveals he could be parting ways with the UFC
You may also like
4 months ago
"He's found a way to do it. Whether that's good or bad for the game, I don't know"
4 months ago
Amateur golfers all over the world unite to emphatize with Rory McIlroy
5 months ago
Collin Morikawa makes huge world rankings leap as Lowry drops back
5 months ago
Rory McIlroy defends Dustin Johnson after Brooks Koepka comments
5 months ago
Rory McIlroy speaks superbly on conscience call that cost him at US PGA
7 months ago
McIlroy and Koepka confirm Nick Watney interactions after golfer tests positive for Covid-19
Next Page