"I got beaten by the better player, this week."

Rory McIlroy was reflective and dignified in the aftermath of another close call at the majors. He will rue letting the 150th Open Championship slip through his fingers and Paul McGinley said the door was left open for Cameron Smith to burst through.

The Northern Irishman started the final round four shots clear of Smith, and Cam Young, and tied for The Open lead with Viktor Hovland. In his previous seven rounds at St Andrew's Old Course, McIlroy had shot one '80' and six rounds in the 60s.

END_OF_DOCUMENT_TOKEN_TO_BE_REPLACED

With the Claret Jug up for grabs, McIlroy carded a 70 when lower was needed to stave off the chasing pack.

On Saturday, McIlroy and Hovland had overtaken Young and Smith as they failed to fire. On Sunday, the roles were reversed. Young fired 65 to finish second. Smith went one better with a 64 that clinched his first ever major.

McIlroy later told CBS that he had played a "controlled" round but admitted that his putter went cold when it was time to up the ante. It is all fine looking back now, when all the cards are played, but Paul McGinley felt a stronger start may have discouraged the chasing pack.

"McIlroy and Hovland never sprung away," McGinley told Sky Sports. "They created a four shot advantage, last night, but they didn't spring away on that front nine [today] and run off. They kind of hung around and, as a result, they gave Cameron Smith a chance to come through and, boy, did he take it." 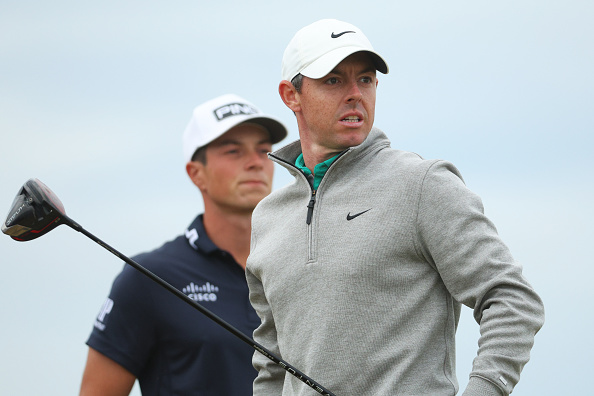 Rory McIlroy and Viktor Hovland look on at the 15th tee, at The 150th Open at St Andrews Old Course. (Photo by Andrew Redington/Getty Images)

Asked by Sky Sports host Nick Dougherty is a -2 round of 70 was "enough" after going into the final round four strokes clear of everyone but Hovland.

"It's very hard to be critical," said McGinley.

"He shot two under par. But, if you want to be cold about it, yeah. It's a Par 67 for Rory. There's three par fours that are drivable and two par fives you can reach in two. For some reason or another, he didn't make any bogeys today but he didn't take advantage of holes like 14, like Cameron Smith certainly did, or 12 - he didn't get up and down, there - or 9.

"There's three [holes], but that's picking. He didn't do a whole lot wrong. To win Open championships with guys in the rearview mirror who are elite, like Cameron Smith, you've got to go out and grab it by the you-know-whats.

"I don't think it's a time to be critical of Rory McIlroy. We should commend Cameron Smith. I don't think Rory did a whole lot wrong but, of course, he's going to think he left it on the table."

END_OF_DOCUMENT_TOKEN_TO_BE_REPLACED

It was only when McIlroy knew that Cameron Smith was going to the 18th tee on -19, and one ahead, that McIlroy truly went for broke with a shot. It was ballsy and it was brilliant - a 183-yard iron approach to the heart of the 17th green.

You could see what McIlroy was trying to do, for most of his round. He was playing within himself but trying to pick off the birdie chances when they came.

The back nine was almost like the second lap of an 800-metre race. McIlroy had a 10-yard lead as the bell round but he was stuck in a steady stride when the Aussie came blazing by his shoulder and never looked back.

All class from @McIlroyRory after a disappointing finish @TheOpen. pic.twitter.com/BtV3obKE1E

As Cameron Smith joked about seeing how many beers he could fit into the Claret Jug, Rory McIlroy looked ahead to a couple of weeks' holiday with his family.

Since he won his last major, in 2014, the 33-year-old has finished in the top 10 of 17 more, without getting to the winners' enclosure. The next closest is Jon Rshm [15] and Brooks Koepka [14]. Still, it is a record McIlroy would rather not have.


popular
Roy Keane cracked up Ian Wright and Gary Neville with England team spirit remark
'I was so stressed the week before the All-Ireland and I ended up having a panic-attack' - O'Shea and O'Sullivan open up
Roy Keane shoots down ITV presenter's 'excuse' for England's draw with USA
Wales supporter who travelled to World Cup with his son dies in Qatar
World Cup 2022 Day Seven: All the major action and talking points
The nine England World Cup footballers who could have played for Ireland
Amancio Ortega interested in buying Man United from Glazers
You may also like
2 months ago
"You've won enough!" - Shane Lowry and Rory McIlroy embrace after Wentworth nerve-shredder
2 months ago
Shane Lowry beats Rory McIlroy to PGA Championship after thrilling finish at Wentworth
2 months ago
Cameron Smith one of six golfers announced as latest LIV Golf stars
2 months ago
'Seeing 18 LIV Golf defectors at Wentworth will be hard for me to stomach' - Rory McIlroy
2 months ago
Rory McIlroy made a class gesture to Scottie Scheffler's family after Tour Championship victory
2 months ago
Rory McIlroy clinches $18m Tour Championship after wild finish at East Lake
Next Page