Cameron Smith shot a scarcely believable final round of 64 to win The Open Championship, and beat Cam Young and overnight co-leader Rory McIlroy in the process.

The Northern Irishman was playing within himself and it looked to be working well. He started off level with Viktor Hovland, both men on -16 overnight, and briefly led by three strokes. Smith knew it was 'do or die' time and, perhaps loosening up, started to drain putts from all over the back nine.

END_OF_DOCUMENT_TOKEN_TO_BE_REPLACED

The front nine saw McIlroy calm and in control of his game. Going off the advice of greats that came before him, Jack Nicklaus and Tiger Woods, the Holywood native set out to be solid, keep the ball in play and take chances when they came along.

Viktor Hovland had enjoyed superb front nines over the first three rounds, but his putting was just off the mark - having looks at holes before trundling by, left or right - and he was +1 for his front nine.

McIlroy had missed birdies putts from eight and 10 feet away, on the second and eighth holes, but he picked up shots on the fifth and ninth [below] to reach the turn in -18.

Rory starting to get going. Another birdie carded and he is still two clear pic.twitter.com/xTkZCuWgyU

Cameron Smith gets it going

END_OF_DOCUMENT_TOKEN_TO_BE_REPLACED

The biggest challenger to Rory McIlroy, midway through the final round, looked to be Cameron Smith.

The Aussie, who won the Players' Championship earlier this year, picked up two shots over his first eight holes and had two other relatively simple birdie putts stay out. 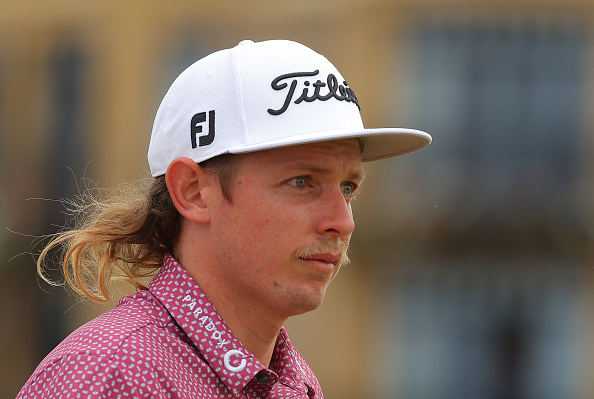 Smith's streak of five consecutive birdies was coming at the same time as Rory McIlroy was going close, but not close enough, with birdie putts. One putt, on 13, was from over 50 feet away and two revolutions of a ball short of what would have been a great birdie.

It was another par, though, and McIlroy stood on the 14th tee one behind the Australian.

Cam Young then joined the party with three birdies in five holes to go -17. On the 15th, Smith's run of birdies ended but he made par moments after Young, his playing partner missed out. The 28-year-old was one clear of McIlroy with three holes of his round left to play.

McIlroy was struggling to go up through the gears, once Smith got the jump on him. He was getting looks at birdie, but from too far out. As he parred 16, though, Smith came up short of the green on 17.

A clutch couple of putts saw Smith get out of 'The Road Hole' with a par and he then birdied the 18th to finish on -20, one better than the championship record set by Tiger Woods, two decades ago.

McIlroy missed a birdie putt on 17, after a brave approach shot. As the Aussie went -20, McIlroy knew he would need an eagle on the last to force a playoff.

He went for broke with his iron approach, but it was not to be. He eventually tapped in for par and finished third. Another major chance had slipped away.

In fairness, Smith had wrenched the Claret Jug from his, and everyone else's, grasp.


popular
Roy Keane cracked up Ian Wright and Gary Neville with England team spirit remark
'I was so stressed the week before the All-Ireland and I ended up having a panic-attack' - O'Shea and O'Sullivan open up
Roy Keane shoots down ITV presenter's 'excuse' for England's draw with USA
Wales supporter who travelled to World Cup with his son dies in Qatar
World Cup 2022 Day Seven: All the major action and talking points
The nine England World Cup footballers who could have played for Ireland
Amancio Ortega interested in buying Man United from Glazers
You may also like
2 months ago
"You've won enough!" - Shane Lowry and Rory McIlroy embrace after Wentworth nerve-shredder
2 months ago
Shane Lowry beats Rory McIlroy to PGA Championship after thrilling finish at Wentworth
2 months ago
Cameron Smith one of six golfers announced as latest LIV Golf stars
2 months ago
'Seeing 18 LIV Golf defectors at Wentworth will be hard for me to stomach' - Rory McIlroy
2 months ago
Rory McIlroy made a class gesture to Scottie Scheffler's family after Tour Championship victory
2 months ago
Rory McIlroy clinches $18m Tour Championship after wild finish at East Lake
Next Page