Tommy Fleetwood and Francesco Molinari's pairing at the 2018 Ryder Cup was one of the most fascinating partnerships of the entire competition.

Fleetwood and Molinari were the only pairing to win in the Friday morning fourball session as Team Europe fell behind 3-1 to start their challenge before they went on to defeat Justin Thomas and Jordan Spieth in the Friday afternoon foursomes, Patrick Reed and Tiger Woods in the Saturday morning fourball session and Woods and Bryson DeChambeau in the afternoon foursomes.

Their domination quickly spurred a 'Yaya-Kolo Toure' inspired chant by European fans at Le Golf National in Guyancourt and Rahm was quick to join the celebrations when Molinari was interviewed by Sky Sports after Team Europe's win on Sunday.

"They probably had the strongest team ever and we were just so good." 🙌

Francesco Molinari explains why winning the Ryder Cup means so much to him, as the celebrations threaten to cut short his interview! 🍾 pic.twitter.com/bolHcc5LOl

Molinari said that the crowd had been amazing throughout the competition and that he's glad to finally have scored some points in the tournament after he became just the fourth man in the history of The Ryder Cup to go 5-0 in a single Ryder Cup session.

"Yeah, I'm glad I survived that. The crowd have just been amazing all week. Like I was saying before, it's not about individual achievements.

"I won twice already The Ryder Cup without scoring a full point before this week, and I'm glad I finally got some points on the board this week. But you know, we do it together. We do it as a group. Look at what Thorbjørn did today. It's incredible." 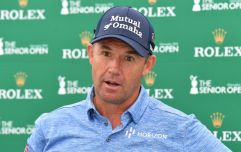 END_OF_DOCUMENT_TOKEN_TO_BE_REPLACED

As for Rahm, he was delighted to make a telling contribution on Singles Sunday by downing Woods. Having missed a tiddler to win on 16, the Spaniard refocused and crushed a drive up the 17th fairway before wedging his approach to within four feet of the pin.

His stone-cold description of how he was not going to buckle to the 14-time Major winner shows he has the mentality to win Majors. He told Sky Sports:

"Well, if you break it down, apart from what's happened at that point, I was 1 UP going into 17, all the pressure was on Tiger. Par, par would probably win it.

"And then once he missed the fairway, I was beyond focused on hitting that fairway. And I hit it right on my spot, about as hard as I can hit a drive. I don't know how far it went, but it was hard. To have 117 metres to that pin, it's just ridiculous. And then just 3/4 to 52 it's exactly the same shot I had on No. 1, and I stiffed it to five feet, and this time I stiffed it to four feet. And it was a really good redemption feeling after missing the one on 16.

"I'd much rather win making a birdie and the way I did than having to par it. Everything happens for a reason, and that was the reason today."

Molinari and Rahm both played a part in a stunning trouncing of Team USA's star-studded line-up.

You may also like
1 year ago
Rory McIlroy and the Saturday night pep-talk that may yet change his fortunes
1 year ago
Six golfers that could improve Europe's fortunes at 2023 Ryder Cup
1 year ago
'I won The Open by six shots in my home country, but this was the best week of my golfing career'
1 year ago
Final Ryder Cup player ratings a tough read for some Team Europe big guns
1 year ago
"I never really cried or got emotional over what I've done as an individual. I couldn't give a s***"
1 year ago
Padraig Harrington struggles to get the words out as Ryder Cup ripped away
Next Page