Larry O'Gorman is best known for his days as an All-Ireland winning half-back for the Wexford hurlers but he's also no stranger to a microphone.

O'Gorman is considered one of the heroes of the Wexford hurling team that won the All-Ireland title in 1996 and he's no problem singing about his own accomplishments after inserting a few lines about a young O'Gorman storming through the midfield to score into the The Wild Swans classic Dancing at the Crossroads.

O'Gorman got quite the response after his rendition but his tales were certainly not embellished after he won the Player of the Year and Texaco hurler of the year award.

Meanwhile Jamesie O'Connor, Tony Browne, Tom Dempsey, Larry O'Gorman, Michael Duignan, Colm Parkinson and Cheddar Plunkett were all in attendance to look ahead at the weekend's action, as well as look back on some of the past matches, while they were unexpectedly joined by Wexford manager Davy Fitzgerald and former Clare great Ger Loughnane. 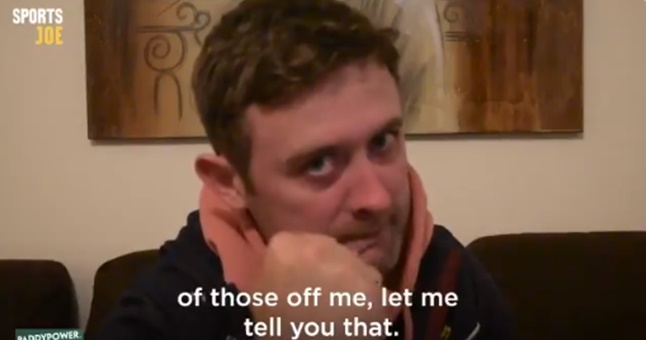 The GAA Hour went to Ferrybank South in Wexford on Thursday night to preview the All-Ireland seni...


popular
We knew Sean O'Brien wouldn't let us down with his Lions XV
Bill Shankly’s grandson asks for statue to be removed from Anfield
Sam Warburton backs Beirne and "phenomenal" van der Flier for Lions squad
'War-scene' in Tyrone dressing room before 2005 final sums up an iconic team
Keith Earls backed for Lions XV by one of the best in the game
'Make him hurt, make him yours' - How the Springboks ruled the world
The England stars in biggest danger of missing Lions Tour
You may also like
1 year ago
Davy Fitzgerald gatecrashes GAA Hour Wexford
1 year ago
'I think Galway's midfield is a little soft, they don't have that combative nature'
1 year ago
'There is that attitude in Kerry - if it's not my man, it's not my problem'
1 year ago
"I don't believe for a second that his contact lens came out"
1 year ago
David Clifford on the biggest change he's made in his kicking
2 years ago
Meath's find of 2019 pings over straightest free you'll see
Next Page