Jack McCaffrey has beaten another man and kicked another score and it's a long, long way back from here against the best, most risk-averse team we've ever seen.

Con O'Callaghan has just won a break from the next kickout - the only kick Shane Ryan would fail to find a man with in the closing 25 minutes - and Paddy Small has curled one high and accurate.

This will make it six points and another Kerry kickout to attack but the goalkeeper's gloves help Small's effort down from its intended destination and the Kingdom break.

Because Dublin had committed to the squeeze and because the ball didn't go dead, they're stretched and panicking now. Jack McCaffrey was helping with the attack - his touch map shows where he spent most of the day - John Small was the one putting pressure on Ryan as the ball dropped in the box and, suddenly, there are mismatches.

James McCarthy isn't picking up Tommy Walsh like he should be, it's Davy Byrne chasing him to the wing and it's Davy Byrne who drops it over his head as Moran kicks long looking for the target man. Walsh picks up the break with McCarthy stranded inside on Paul Geaney.

Killian Spillane makes a beeline sensing that the Dubs are uncharacteristically at sixes and sevens and it's left for Brian Howard to scale the pitch again and now do a one-on-one job on a corner forward who's been on the pitch for just 10 minutes.

Spillane rounds him and, suddenly, it's game on.

END_OF_DOCUMENT_TOKEN_TO_BE_REPLACED

Before the match, the debate centred around whether or not Tommy Walsh should play from the start.

The truth is he needed just five minutes to turn this All-Ireland final on its head. Five minutes to eat into a five-point Dublin lead.

END_OF_DOCUMENT_TOKEN_TO_BE_REPLACED

62' - High ball into Tommy Walsh in the square, high catch and assist for Sean O'Shea

With three plays, he was directly involved in one goal and two points and Kerry were level in a game that was threatening to get away from them. 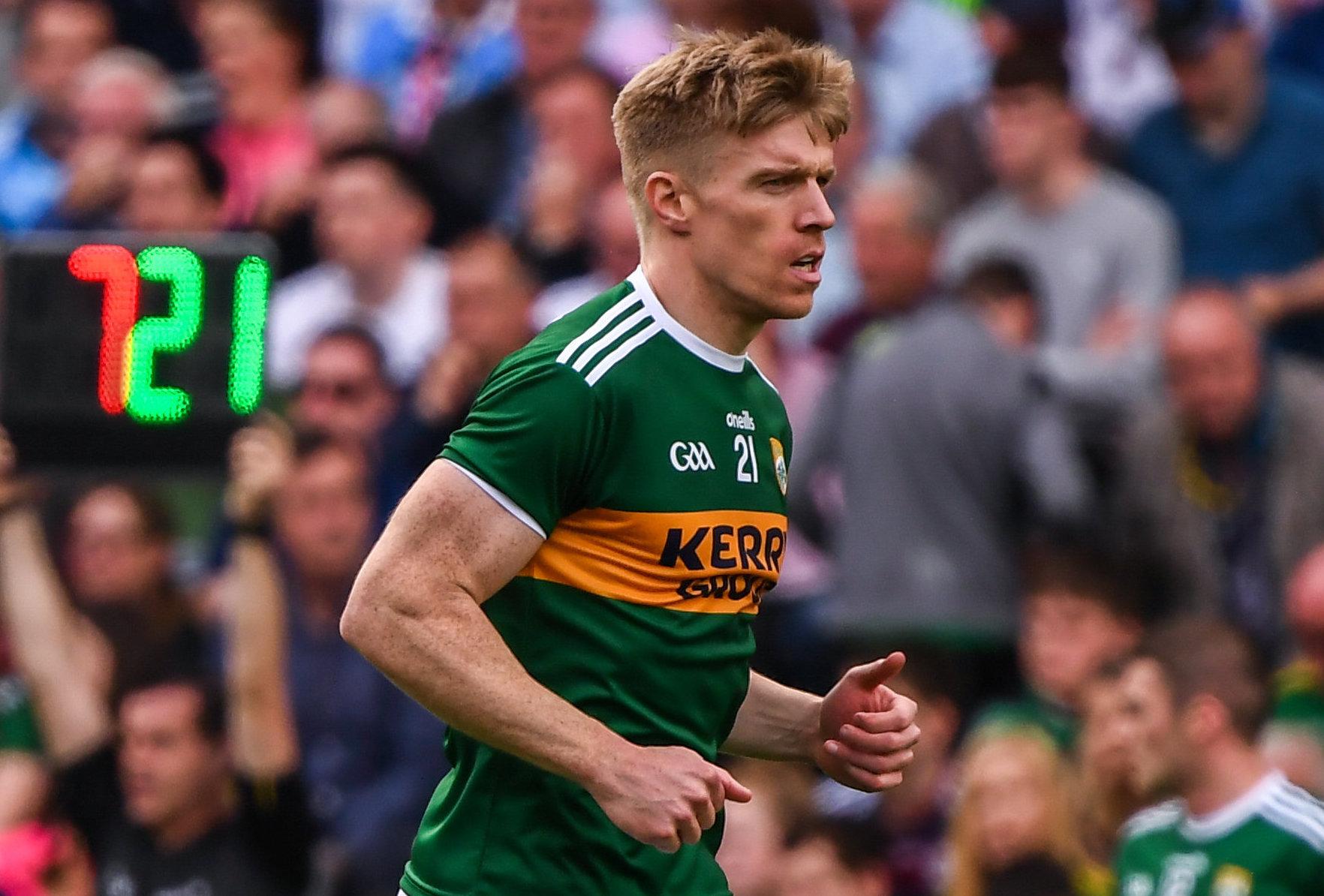 But whilst the introduction of Walsh was inspiring, it coincided with a fateful Dublin substitution that was dangerous and had knock-on effects elsewhere.

In the 52nd minute, Tommy Walsh was sprung for Brian O Beaglaoich adding more size, muscle, and bigger targets to the Kerry arsenal.

In the 52nd minute, Paddy Small was brought on in place of Michael Darragh MacAuley.

END_OF_DOCUMENT_TOKEN_TO_BE_REPLACED

That saw Brian Howard shift to midfield but, because of that activity in the dugout, Dublin were now down MacAuley from their engine room, they didn't have Howard to back it up from half forward and they didn't have James McCarthy at the other side of that because he was detailed to go straight onto Walsh.

McCarthy and Howard were so pivotal for Dublin in those middle third exchanges but, where Howard was able to come from deep - like Dean Rock and Kilkenny and O'Callaghan did at times too - to take ball from Cluxton, he was now in midfield and he was doing it without someone like him to help from half forward.

And it showed. In those 25 minutes, from the 52nd to the 77th, Kerry dominated the battle for primary possession with Cluxton failing to find a team mate with three of his seven kicks. 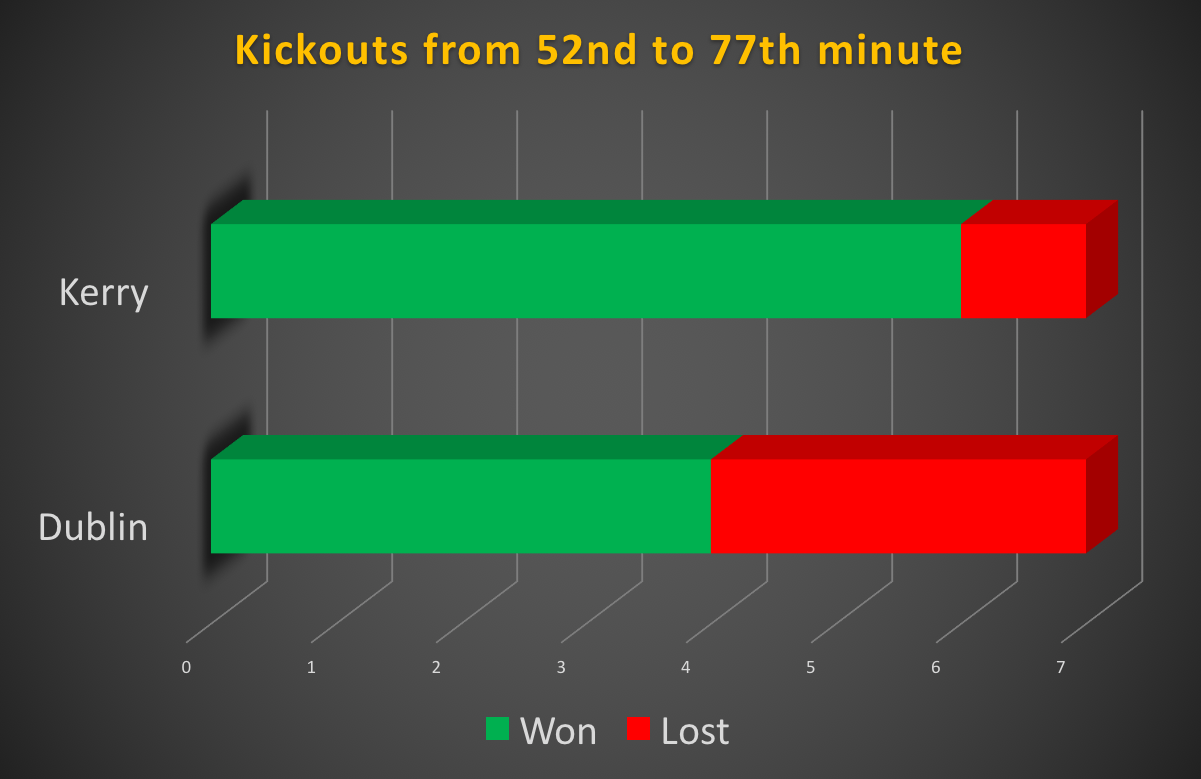 Obviously, like so much of the game, the red card and the toll it would've taken on energy and shape has to be factored in but what correlated with Tommy Walsh being on the field can't be ignored.

James McCarthy was reduced to a man-marking job sometimes at the edge of the square and, for the kickouts, he was no longer an option - not even for breaks - because he was deeper and he was being held by Walsh.

With no MacAuley, no McCarthy and Kerry already keeping the ball away from Fenton all afternoon, they got their foothold in a match that could've gone away from them.

They kicked two scores directly from Cluxton's misplaced kickouts and hit another wide and they were able to get out beyond the Dublin press with ease at a time when other teams are usually choked and put to the sword. 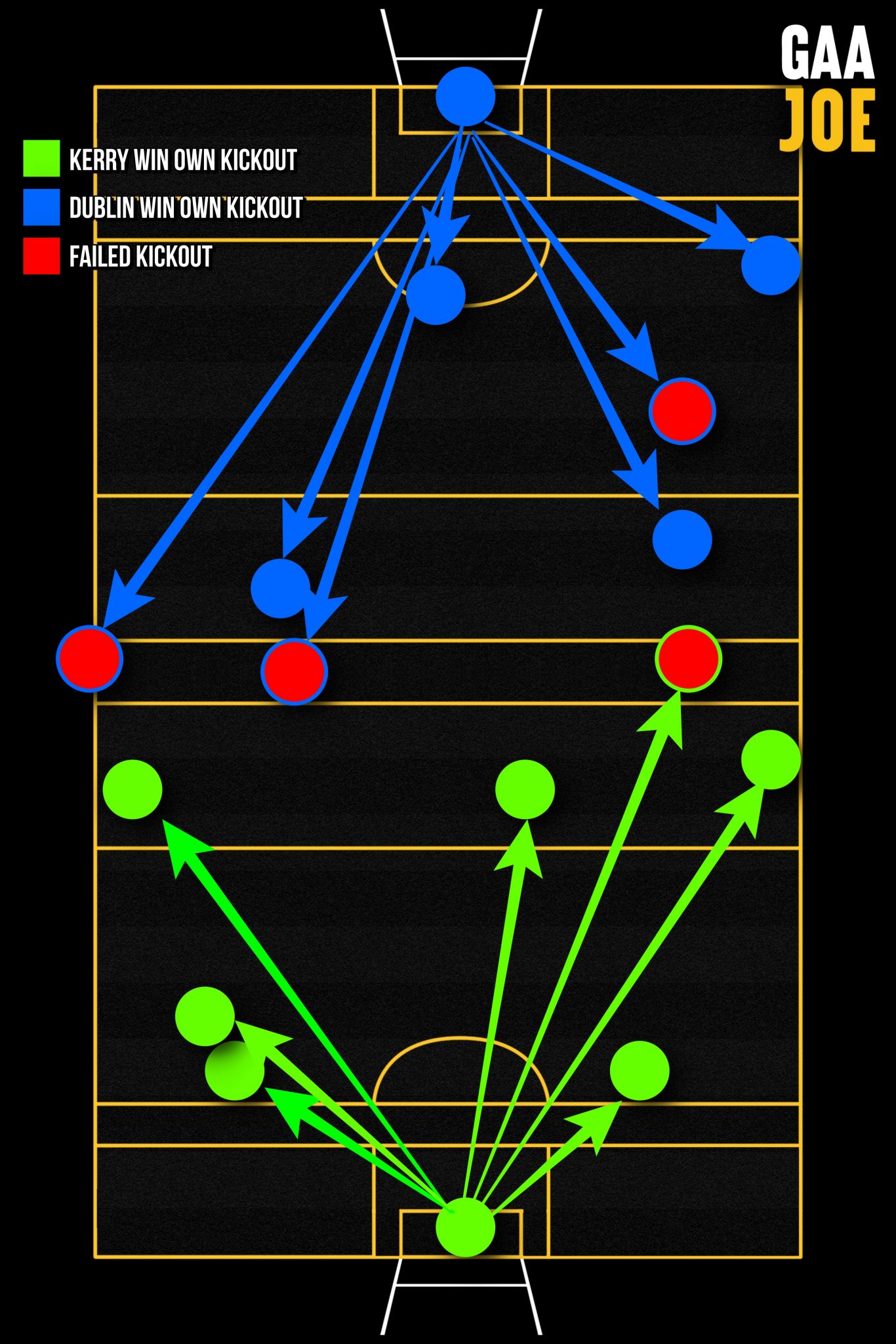 With five points in it and 25 minutes to go, the game changed.

It changed off the back of a shot dropping short. It changed with Dublin losing the kickout battle. And it changed because of Tommy Walsh.


popular
The SportsJOE 12 o'clock quiz | Day 136
The daily diet of Manchester United midfielder Jesse Lingard
The diet of a modern day rugby player compared with a top jockey
COMPETITION: Answer this survey for a chance to win a fabulous stay at the Trident Hotel in Kinsale
The SportsJOE 12 o'clock quiz | Day 135
Jadon Sancho to earn eye-watering salary at Manchester United
James Ryan's misfortune opens Leinster and Ireland doors for Ryan Baird
You may also like
2 months ago
Seven-time All-Star Goldrick using time off to strengthen and improve
4 months ago
"Sometimes sport can overwhelm you, it was time for him to take a deep breath"
4 months ago
Dublin hurler Mick Carton back on the mend after winning another battle
4 months ago
"I'd spent hours and hours honing my left foot with my dad when we were young"
4 months ago
April club month a goner as virus threat causes longer delays
4 weeks ago
"We haven't got that excuse anymore" - Kickhams primed for Dublin championship
Next Page